Once upon a time, if you’re old and wise enough to remember such things, the world made sense and we only had to think about one Walking Dead series. Then, this little zombie-comic turned AMC series became the most popular show on TV, and the rumor mill began churning out talk of a spinoff series. It would be a prequel, set in Los Angeles and (at least before AMC picked it up), it would be called Cobalt.

As we all know, the #brand machine kicked in and Cobalt eventually became Fear the Walking Dead, a title I personally think is more of a mouthful than a zombie bite. But the term “Cobalt” stuck around as the title of last night’s FTWD, the penultimate chapter of season one’s six episodes. In it, with the help of some good old Bolton-style torture, we found out what “Cobalt” means, and why it’s a far more fitting title for the show we’ve been presented than Fear the Walking Dead.

Because the story of Fear, no matter what happens, is a hopeless case. Even though the characters, looking at you Travis, are in denial we the audience know all roads lead to The Walking Dead, one of the bleakest and hopeless shows on television. No character is going to “survive” this show, they are just going to “not die” long enough to watch the world end. I would say all hope is lost, if there was any hope to begin with.

The military certainly disagrees, though. “Cobalt” is basically their term for “all hope is lost.” Abandon ship. Peace. Game over, man. Save yourselves, bitches. As Ofelia’s National Guard boy-toy says after some light questioning followed by fatherly skin-torture: “‘Cobalt’ is the command code to initiate evac from the Los Angeles base…not you, just us.” The entire existence of Fear the Walking Dead as a TV show has led up to Cobalt Initiation. In a lot of ways, the moment the military decides to announce “Cobalt” over the airways is the exact moment Fear the Walking Dead blends into The Walking Dead proper.

Which is why it’s slightly frustrating to still watch these characters have the same hardcore conflict over are they/are they not still human when it comes to the undead, and even more frustrating that the show doesn’t trust us to understand this either. Case in point: the scene were Lieutenant Bowers attempts to cajole Travis into sniping a walker they find on the way to the medical facility. “You don’t think she’s human, do you?” he asks Travis as he casually sets up the rifle. But Travis clearly thinks she’s human. We know this. The Dog and Not Fade Away spent significant time showing this to us. Which is why it’s more than a little heavy-handed to have a crash zoom on the undead woman’s name tag, in case you still weren’t sure that making decisions in the apocalypse is hard.

Not so conflicted is Daniel Salazar, who takes point on the aforementioned torture and interrogation of Corporal Andrew Adams. Salazar, initially the only one I was truly interested in, has become one of those hard-to-enjoy TV characters that explains simple points with extended, talky monologues. If you asked Daniel Salazar what his favorite Netflix show was, his answer would start with “when I was 15, they kicked open my door and took my mother,” and go on for 12 minutes, minimum. Three episodes from Salazar’s first appearance and this particular trait is verging on self-parody.

At least, if Salazar is a long-winded and cruel realist, he’s consistently a long-winded and cruel realist. Less so is Madison, but her acceptance of the torture is an actual, realistic character progression. Madison is one of the only characters who has actually stepped outside the fence to see how utterly horrific things have gotten, both dead and undead-related. She’s also one of the few with a motive, and it’s a simple one—she wants her son back.

The problem with Fear the Walking Dead (and, oh my good God, is it the problem with The Walking Dead): the more fenced in the main characters get, the less interesting the narrative becomes. How are we supposed to buy these radical changes in mood and tone these people go through when they’re being kept from actually experiencing anything? This show picks up, and actually becomes great, when we venture outside the fences. Nick’s charismatic cellmate, played here by veteran stage actor Colman Domingo, immediately cemented himself as this show’s most intriguing character from the get-go. Domingo gives the character an anything-goes urgency missing from most, if not all, of our other main entry points into this story. He’s a more clever Salazar, and a less reserved Madison. When he saves Nick from being carted off by the guards, there is little indication it is out of the kindness of his heart. Strand knows exactly why Nick is sweating bullets: “You are a heroin addict. That’s the gold standard, don’t sell yourself short.”

But Strand has a key to the cell and a plan to use it—who better to serve as an easily expendable piece of that plan than the desperate drug addict?

Elsewhere, Chris Manawa and Alicia Clark (who is not about to kill herself, my apologies) break into a mansion and destroy the place, notable only because that is exactly what I would do at a time like this. I’ve said this, repeatedly. But also, this little plotline that seems like filler actually injects this story with a genuine warmth completely absent from the four preceding episodes (yes, I’m counting the Monopoly scene). Remember that lack of hope I mentioned before? Maybe it is there, with Alicia and Chris. Maybe hope isn’t accepting torture as a viable option, or finally realizing the undead are a threat. Maybe hope in this case is looking at the bleakness of an empty mansion and saying fuck it, the world is over, ladies and gentleman. Let’s break some expensive shit.

Where are we, as we head into the sixth and final episode of Season 1? Salazar strolls up the steps to an arena, where the doors are straining against the weight of all the infected inside (reminiscent of The Walking Dead pilot’s  “DON’T DEAD OPEN INSIDE” doors. Yes, I know what it really says). It turns out the first step of the military’s Cobalt plan was to lock the doors and hope for the best while everyone ran as far as possible, leaving the civilians unprotected and alone.

Cobalt means the time for optimism is over, and the time for panic is now. And that may be the best option for this show going forward. Stop fearing the walking dead and accept the walking dead as the new reality. Knock the fences down. Convince yourself the name tag means nothing anymore. Let’s break some expensive shit.

The world is over, and Fear the Walking Dead needs to accept that. 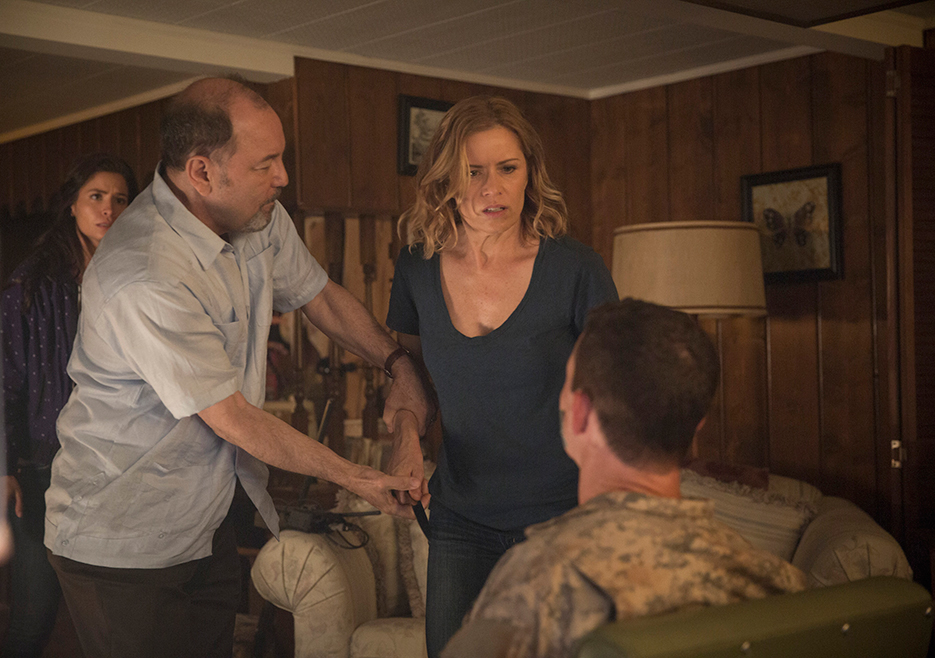