No matter what you think of a guy, you have to feel some respect for him when he takes on a rather absurd challenge in order to raise a million dollars for charity.

In this case, that guy is comedian Will Ferrell.

In his new HBO special, Ferrell Takes the Field, the funnyman attempts to recreate the feat accomplished by shortstop Bert “Campy” Campaneris, who, when he was 23, played all nine positions in a 1965 game for the Kansas City Athletics. In his effort to match that accomplishment, Ferrell embarks on a crazy day during spring training in which he plays for ten teams during five different games.

Ferrell, at 47 and with clearly limited athletic ability, has taken on this dare to boost the coffers of the philanthropic organization Cancer for College, which helps support cancer survivors by awarding scholarships.

Craig Pollard, who founded the organization, was a USC fraternity brother of Ferrell’s. His baseball career was cut short by the disease, something that obviously had motivated Ferrell to participate in this undertaking.

“Will’s been a baseball fan for years,” explains Executive Producer Joe Farrell (no relation). “When he and Craig started talking about what they could do as a big event to raise awareness and funds for College for Cancer, they started talking about that it was 50th anniversary of what Campy did. Truthfully, then they started to laugh about it—like could they really pull it off? That laughing turned serious pretty quickly and they reached out to Major League Baseball to see if it was even a possibility that they would come onboard, which they did pretty almost right away. After that, it was all about finding a media partner to let us shoot it and who would air it and who would make the generous donation that we were looking for.”

Ferrell and his crew found that benefactor in HBO. “They agreed to donate the full amount, but Will really did have to complete the task, so there was money, and really a lot of pride, on the line,” says Farrell.

The special is reminiscent of an ESPN 30 for 30 documentary with interviews, soaring music and plenty of slo-mo shots, all the while moving quickly as Ferrell in character as a ballplayer trying to latch onto a club, hustles from position to position, team to team and game to game.

“Once we were able to lock in the exact date, MLB agreed to adjust two of the games, changing their start times,” reveals Farrell. “But even with those adjustments we were racing throughout the day to make it happen. And, while MLB and the coaches and team owners knew about this whole thing well in advance, I believe most of the players were told that morning that it was happening. We did that because we wanted people to be surprised in a good way and not plan things. When you’re shooting a comedy documentary you don’t want moments to feel scripted. The funniest things are those things that happen naturally.”

The interaction with the players and fans at each game makes the special interesting on many levels, especially when Ferrell replaces an MVP, actually makes some decent plays and feels the wrath of the fans when he doesn’t.

“Everyone expected him to be funny, but at the same time he was playing in real major league games. There was no, ‘oh well, we’ll just fake this,’ or ‘we’ll just go easy on him.’ Every game, the players were like, ‘O.K., let’s see what you got,’ so he had to bring it,” explains Farrell.

There is plenty of fun in watching Ferrell switch jerseys and hustle, but there actually is some tension in the special, especially when the comedian pitches and bats. In a fielding position, he may not need to make a play or some other player may cover for him, but in pitching and batting there is no available other option—it’s all Ferrell.

Another element that creates drama throughout the hour-long broadcast is the actual question of whether Ferrell will make it to all of the pre-planned games to play all of the positions. In the attempt to accomplish this, extreme measures were taken, one quite hilariously.

Making it through the day was a physically daunting task for all involved discloses Farrell, “We started the day at 5:30 a.m. and we worked pretty much non-stop until about 9 p.m. that night. It was intense and everyone on the crew was exhausted at the end of the day. Will was almost superhuman and it’s a testament to his talents that he was able to really rally people to keep everyone going.”

With this endeavor in the books, could there be a Ferrell Takes the Football Field or Ferrell Takes the Soccer Field in the future? Executive Producer Farrell laughs at the prospect. “After the premiere screening we were at a bar and we started fantasizing a bit about doing it another way, but we quickly realized that this was the perfect storm of Will being available, MLB and HBO being open to it and all the teams being in Arizona and willing to participate. It truly was a once in a lifetime opportunity, so I don’t foresee us doing anything remotely like it anytime soon…but, if there’s one thing I’ve learned with Will, it’s that you never say never about anything.”

Farrell wants to remind everyone that while this was a humorous endeavor, it was done for altruistic purposes—to raise awareness and funds for Cancer for College. “As cliché as it sounds, I’m just so happy that everyone really banded together to make this happen. Real kudos should be given to HBO, MLB, Will, and the Funny or Die crew. It was an amazing experience and I think everyone who watches it will see that. So, please, just watch it. If nothing else, you’ll get a good laugh watching Will try to do this.”

Ferrell Takes the Field debuts Saturday September 12 at 10 p.m. on HBO. For more information about Cancer for College, please visit this site. 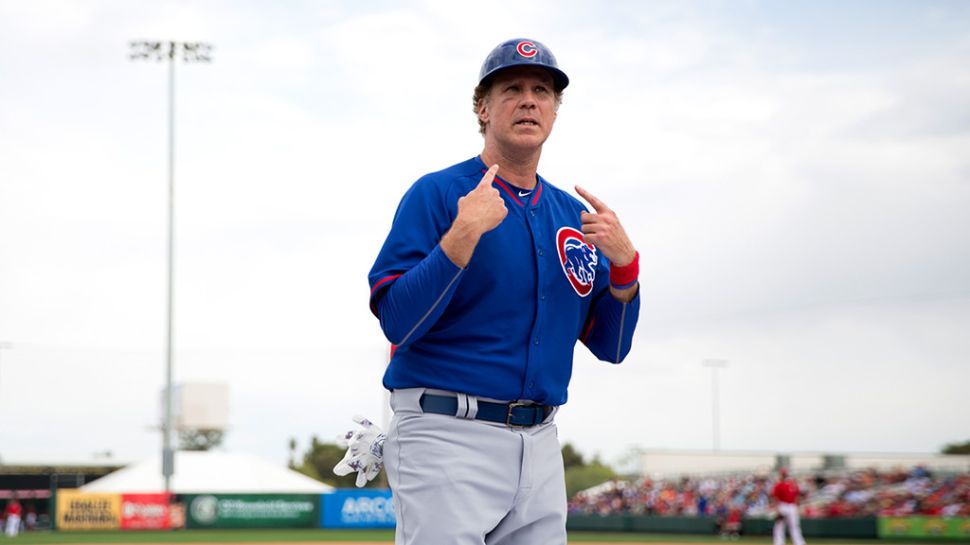