St. Patrick’s Cathedral is almost ready to show off the results of a three-year, nearly $200 million restoration, just in time for Pope Francis’ upcoming visit.

“The news of the Pope coming hurried up the process,” said Jeffrey Murphy, a partner at Murphy Burnham & Buttrick Architects, the firm behind the restoration.

The idea for the design project began in 2006, when the church began showing signs of disrepair.

“There were little chips falling off the building,” Mr. Murphy said, pointing to the exterior of the cathedral during a recent tour. The financial crisis, however, held up the construction until three years ago, when the process began in earnest.

The architecture team worked with the cathedral in order to ensure that it would be able to stay open throughout the construction.

“It was a challenge for the priests, but we made the decision at the very beginning that we wouldn’t close, and would continue all of our activities except for weddings,” said Monsignor Robert T. Ritchie, the cathedral’s Rector Reverend.

“The priest learned to talk louder over the construction so people could hear the sermons, but it was kind of unpleasant,” Rev. Ritchie added. “Construction was very loud. We have thousands of people in every day to Mass… that was very difficult.”

But now those visitors can finally see the results of the careful restoration, which was done in multiple phases.

“One of the biggest conservation efforts in our office was stained glass,” Mr. Murphy noted—there are nearly 3,300 individual panels of the glass. “We not only restored the stained glass, but we restored the protective glazing on the outside and used very high performance glass that cuts UV rays and protects the glass,” he said. “One of the challenges here, especially on the south side getting blasted by the sun.”

While there’s still some work that will continue into the next year, including an geothermal plant, which will provide all of the heating and cooling for the cathedral when completed, much of the work is finished, including the restoration of the bronze cathedral doors, which weigh 9,000 pounds each.

Other technological upgrades include a new audio system and speakers, security cameras and HD cameras that are able to broadcast sermons.

“We did take the doors offsite to be restored. One of the things that was so great about that was it enabled us to take the paint off of them and restore them fully, but you can actually operate them now. We fixed the hinges,” Mr. Murphy said.

For Rev. Ritchie, who is usually responsible for opening the massive doors, this held a special significance.

“We used to laugh because before, he [Rev. Ritchie] had to be like a linebacker to open the door,” Mr. Murphy continued.

When Rev. Ritchie first came to the cathedral nearly ten years ago, the doors were kept closed. He was told, “we don’t open the doors. Only for a big wedding,” or when the President or Pope came.

“I said, ‘If we open the doors, wouldn’t more people come in?’ They said, ‘Yes.’ We started to open the doors that afternoon,” Rev. Ritchie said proudly. “Our doors at St. Patrick’s are open as much as possible.” 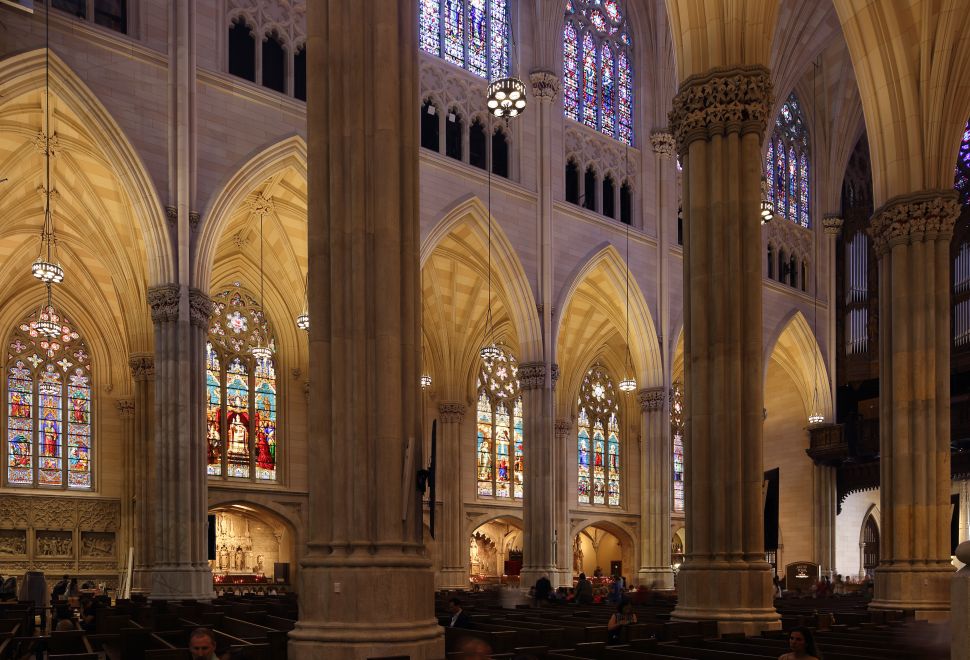