Pope Francis implored a crowd of 20,000 in New York City tonight to see the people who go unnoticed because they have “no right to be part of the city”—the poor, the foreigners, the elderly—saying that God and the Roman Catholic Church are “living in our cities.”

“God is living in our cities. The Church is living in our cities, and she wants to be like yeast in the dough. She wants to relate to everyone, to stand at everyone’s side, as she proclaims the marvels of the Wonderful Counselor, the Mighty God, the Eternal Father, the Prince of Peace,” Francis said in his homily during a Mass at Madison Square Garden, according to an official translation provided by the Vatican. He spoke in Spanish, his native tongue and the first language of many new New Yorkers.

Francis, the leader of the Roman Catholic Church, was greeted with raucous applause when he entered Madison Square Garden this evening, typically home of the New York Knicks and Rangers basketball and hockey teams. He has been immensely popular with many Catholics but also with non-Catholics, for his focus on issues like immigration, helping the poor, and protecting the environment. The Mass is among his final appearances after a whirlwind two days in New York City, before he departs for Philadelphia.

“We are in Madison Square Garden, a place synonymous with this city,” Francis told the crowd. “This is the site of important athletic, artistic and musical events attracting people not only from this city, but from the whole world. In this place, which represents both the variety and the common interests of so many different people, we have listened to the words: ‘The people who walked in darkness have seen a great light.'”

Francis went on to say that living in a big city “is not always easy,” and that “a multicultural context presents challenges.” But he went on to praise cities for their multiculturalism—citing the “hidden riches” of diversity of culture, or tradition and of experience, a variety of languages, costumes and cuisines. But even as they bring together “the different ways which we human beings have discovered to express the meaning of life,” Francis said cities often “conceal the faces of all those people who don’t appear to belong, or are second class citizens.”

“In big cities, beneath the roar of traffic, beneath ‘the rapid pace of change,’ so many faces pass by unnoticed because they have no ‘right’ to be there, no right to be part of the city,” Francis said. “They are the foreigners, the children who go without schooling, those deprived of medical insurance, the homeless, the forgotten elderly. These people stand at the edges of our great avenues, in our streets, in deafening anonymity. They become part of an urban landscape which is more and more taken for granted, in our eyes, and especially in our hearts.”

But Francis said Jesus still walks the streets of cities and fills his people with hope.

“A hope which liberates us from the forces pushing us to isolation and lack of concern for the lives of others, for the life of our city. A hope which frees us from empty ‘connections,’ from abstract analyses, or sensationalist routines. A hope which is unafraid of involvement, which acts as a leaven wherever we happen to live and work,” Francis said. “A hope which makes us see, even in the midst of smog, the presence of God as he continues to walk the streets of our city.”

He went on to recall the answers Jesus would give, in the Gospels, when asked by followers what they ought to do. Jesus would motivate them, Francis said.

“He keeps telling his disciples to go, to go out. He urges them to go out and meet others where they really are, not where we think they should be. Go out, again and again, go out without fear, without hesitation,” he said. “Go out and proclaim this joy which is for all the people.”

Francis delivered the homily during a mass that saw thousands of New Yorkers partake in the sacrament of communion in the presence of the global leader of their church. Among those in the crowd were numerous elected officials, including Gov. Andrew Cuomo and Mayor Bill de Blasio, who have each praised the pope’s message, particularly around unity and accepting immigrants. Both men gave the pope gifts; shortly before the Mass, Mr. Cuomo—a former altar boy—told reporters he asked the pope to pray for his father, former Gov. Mario Cuomo, who died earlier this year.

The pope arrived after a busy day: he spoke to the United Nations this morning, declaring the environment had rights; he called for a world of peace at the World Trade Center after meeting with families of people killed by the September 11 terrorist attacks; he commiserated with immigrant students at a Catholic school in East Harlem. Then he thrilled some 80,000 New Yorkers who gathered in Central Park just to get a glimpse of him driving by in a procession en route to Madison Square Garden, where he entered the arena in his open popemobile, Cardinal Timothy Dolan, the Archbishop of New York.

The Mass even had  an opening act—security concerns necessitated that the crowd of worshippers arrive hours early, so while attendees awaited the pope’s arrival, they were entertained by the likes of Jennifer Hudson, Harry Conick, Jr., and Gloria Estefan, who sang devotional music. There were also performers from nearby Broadway: Kelly O’Hara sang a musical version of the Lord’s Prayer, Norm Lewis the Ave Maria. Actor and devout Catholic Martin Sheen spoke, as did Bishop William Murphy of Rockville Center, who offered a history of the papacy.

The crowd was also led in prayer—the Apostle’s Creed, the Lord’s Prayer, the Rosary—in English and then in Spanish, by school children and other Catholics. Like at any Knicks game, hot dogs and nachos were available at concession stands (no beer, though) and there were souvenirs—$5 Pope Francis lapel pins quickly sold out at one booth, where the faithful could still find $25 hats, $30 Christmas ornaments, and rosary beads starting at $45—all to be blessed by the pope at the close of the Mass. Unlike a Knicks game, priests were stationed throughout the arena to offer the sacrament of confession before the service. 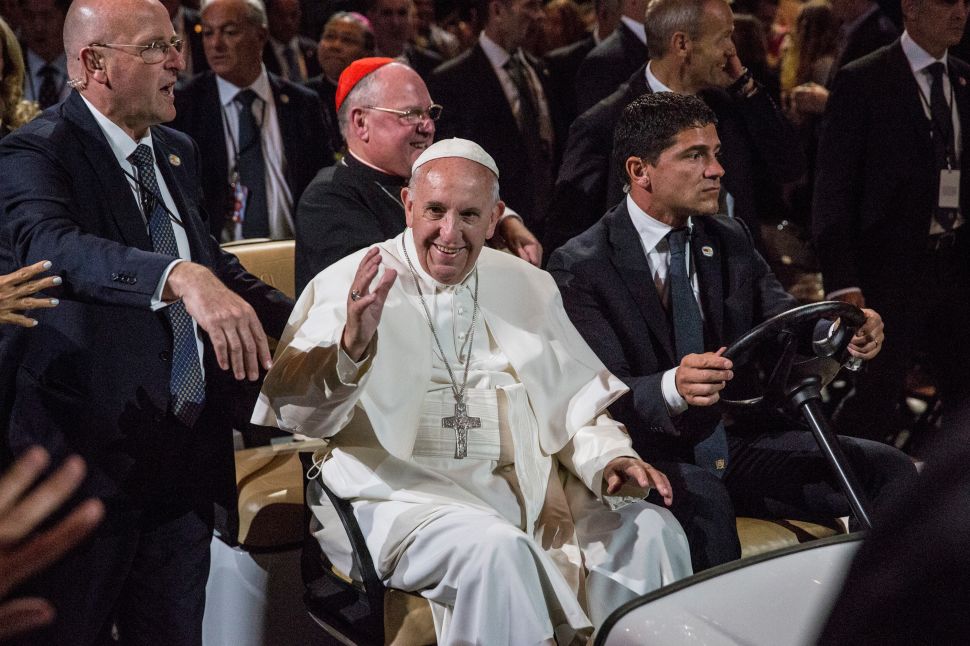