It’s a new day in Gotham City, yes it is. Oswald Cobblepot made good on his promise to become the King of Gotham, lording over his lavish dining room table and delivering kisses of death to unruly henchman. Harvey Bullock quit the force to become at bartender at Default New York Bar No. 415. Barbara Kean is in Arkham Asylum, hanging with pseudo-Joker Jerome, uncle-of-Black-Mask Richard Sionis, and mindless brute Amygdala. Bruce Wayne and Alfred are trying their best to get into the not-yet-Bat-Cave. Fish Mooney is still at the bottom of the ocean, thank God.

And then there are Jim Gordon and Leslie Thompkins, who we find in relatively romantic bliss until Jim is forced to straight murder a dude to get his job back. Just another day in Gotham.

But seriously, man does it feel great to be back in good old Gotham for another round of reference guides. I missed this ridiculous Bat-quel, with its nonsensical plots and its misplaced whimsy and Robin Lord Taylor’s wonderful prosthetic nose. No, Gotham isn’t a masterpiece but I felt we developed a bond over an entire season and many angry (possibly intoxicated) rants about how it’s ruining Batman canon.

Not to say season one didn’t have its problems. On the contrary, the show had more problems than Gotham City itself, and that place has a guy that murders people with balloons. For one, Barbara. Oh, Barbara. Sweet, often pants-less and high Barbara. What even were you? Barbara went from worried housewife to lesbian adulterer to frightened captive all throughout one season, and in the end just kidding she’s actually a psychopath that killed her parents. Barbara Kean wasn’t so much a character, but what happens when a writer drops all his note cards with stuff like “character traits” and “character motivations” and “meaningful dialogue” written on them and they all get jumbled together.

Then there was the small fact that the entire show kind of, sort of, had zero actual story beyond “one day, Batman will be a thing.” It leaned too heavily on wildly inconsistent villain-of-the-week plots and a mob story that fizzled and died with about eight episodes left. Throughout all this, Gotham was night and day tonally, incapable of deciding whether it was going for high-camp, grit, or a Law & Order: Gotham City procedural. I went into this second season hopeful, but still clutching my mother’s white pearls fearfully.

Imagine my surprise when Gotham took nearly every problem I had and fixed it immediately (full disclosure: I’ve seen the first three episodes. No spoilers, that’s just what I’m basing most of my “review” on. Also, episode three is crazy. But, no spoilers). Insane, conniving villainous Barbara is intriguing because at least that’s an actual character. The scene where she calls Jim and Leslie’s apartment from Arkham seemed, to me, like the writers actively tring to show why Barbara switched between moods and attitudes so sporadically last season. Turns out, it’s just because she is craaaaaazy. Which is Gotham‘s reasoning for most things. But if we’re being honest, I’m okay with that. Let’s move on. I think going back and trying to explain any more of the Barbara holes in more detail (did she actually love Montoya and drugs, or was that just because she’s craaaaaazy?) would require subtle storytelling that I’m not sure Gotham can pull off, nor do I think the writers are interested in even trying.

And as for the tone, we’ve settled into ridiculous levels of camp, and it’s fantastic. Everything is over the top. Everything! The cheesy dialogue is especially cheesy (“I did a bad thing. I DID A BAD THING”), the violence is more violent (“hey boss, how about a bottle of beer?”), and the villains participating in said violence are even more gleeful while doing so. Gotham finally realized it’s much more Schumacher than Nolan. It’s becoming something closer to a love-child between the original live-action Batman and Batman: The Animated Series, with a teenage Jack Nicholson stopping by to play the Joker.

Most refreshing of all, Gotham season two is primarily serialized. Gone are the cases-of-the-week, enter an on-going storyline and an actual big bad played by James Frain. Some of you might know James Frain from his work on True Detective, where he played “wait, who? Let me check IMDB. Wait, what is happening?” Here, he plays the shadowy Theo Galavan. Galavan’s plan to poison a fat guy named Zaardan the Soul-Reaper on the off-chance he’d get arrested, on the off-chance he’d be taken to Arkham, on the off-chance he’d be in the exact cell he needed to be exactly when the poison goes off was so ass-backwards and ridiculous that I immediately love the character of Theo Galavan.

It’s worth noting that one thing that hasn’t changed is Gotham‘s unwillingness to get its hands truly dirty for the sake of moving the plot along. Are we really just going to gloss over the fact Barbara, like, fucked Richard Sionis for a telephone? Is Leslie going to be cool with Jim collecting money for a mafia boss and shooting a man in the process that quickly? Just because Gotham is a more fun roller coaster this season, doesn’t mean it’s any less bumpy.

So! If you’re new here, this review also serves as a weekly reference guide, where I point out every possible reference to lore Bat-related and beyond, regardless of whether or not it’s relevant, sensible, or even true. As always, let’s run down every reference, fact, and nugget of Bat-history brought up the Season 2 premiere,” Damned If You Do….”

Much of this episode was undercut with Bruce Wayne and Alfred trying to get into the steel door at the bottom of the cave they discovered in Thomas Wayne’s study at the end of season one. Naturally, they eventually just build a fertilizer bomb and blow their way in. Once inside, they do not, unfortunately, find a 50 Shades of Wayne Red Room. They do find some mysterious technology, and a note to Bruce that his father wrote on the day he became psychic and assumed he’d be murdered in an alleyway. “I feel like we’re going to be murdered one day, Martha,” Thomas Wayne said. “Better write our infant son a future-note.”

Before the fertilizer explosion, however, Bruce does try and punch some codes into the key lock. The first code he tries, the only one we see, is 1012. For what it’s worth, Gotham‘s pilot episode aired 10/12, October 12. Dun dun dunnnn oh the door is still locked.

Played here by James Frain’s creepy face, Theo Galavan says he is a billionaire and Gotham native, returning to help the city he calls home. That…is probably bullshit. I mean, seriously, look at James Frain’s face. Anyway, since we have no actual comic book Theo Galavan to turn to, it’s time for a little baseless speculation.

A billionaire that returns to Gotham, worms his way into the city’s higher echelon, and claims to be acting as a savior but working towards tearing the city down fits the bill of Batman archnemesis Ra’s al Ghul. Ra’s was Introduced in 1971, and portrayed jointly in Batman Begins by Liam Neeson and Liam Neeson’s goatee. James Frain could easily portray Ra’s, because really any actor could easily portray Ra’s. The dude is immortal, constantly brought back to life by the chemical in the Lazarus Pits (possibly the chemical Theo feeds to Zaardan?) Plus, one time Ra’s daughter Tahlia and Batman got it on, which resulted in Bruce Wayne’s son Damien. In the “this season on Gotham” clip, we get a quick glance of a blonde girl that Bruce seems quite enamored with. Interesting, indeed.

For what it’s worth, the name Theodore is an off-shoot of Theodōros, which mean’s “God’s Gift.” Theo is a savior arriving in this city, attempting to destroy it in order to build it up better than before. God’s Gift to Gotham. (Ra’s al Ghul actually means the “Demon Head,” which is…slightly different). 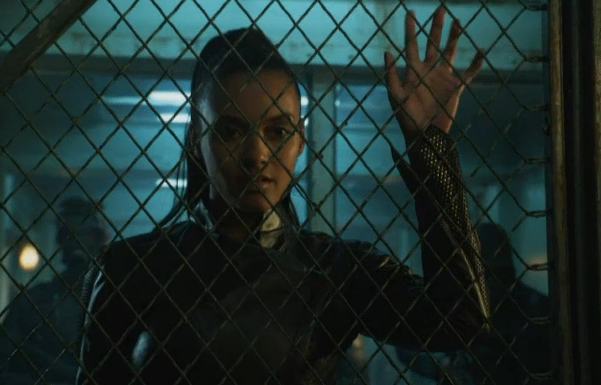 The Gotham creators are saying Theo’s sister Tabitha is the DC Comics villain Tigress, basically because she wears leather, uses a whip and they already have a Catwoman. Fair enough.

There have been three versions of Tigress through the years, dating back to 1930, but none of them named were Tabitha Galavan. One of them WAS named Artemis Crock, which is an opportunity I think Gotham is really dropping the ball with.


So I’m officially pointing out a Gotham season two reference to Gotham season one. Such is life. In that great kitchen scene between Oswald, Victor Zsasz, and Commissioner Loeb, Oswald refers to murdering Loeb as the “least worst option.”

This is exactly what Jim called Carmine Falcone in the season one finale of Gotham, when it looked like the old mob moss was set to be succeeded by Fish, or Oswald, or someone else who was a “least worst bad not good option,” or something equally as clunky and Jim Gordon-like. I like this, because I enjoy the way Gotham has set up Oswald and Jim as two sides of the same coin, the same roles Batman and the Joker will fill later in life. Oswald borrowing terminology from Jim highlights the fact that he’s learning just as much from the lawful side of town as Jim is borrowing from the underbelly.

If nothing else, it furthers the theory that Oswald and Jim are secretly lovers, a theory that has already been kickstarted on countless Tumblrs across the internet. Seriously though, do not look that up. 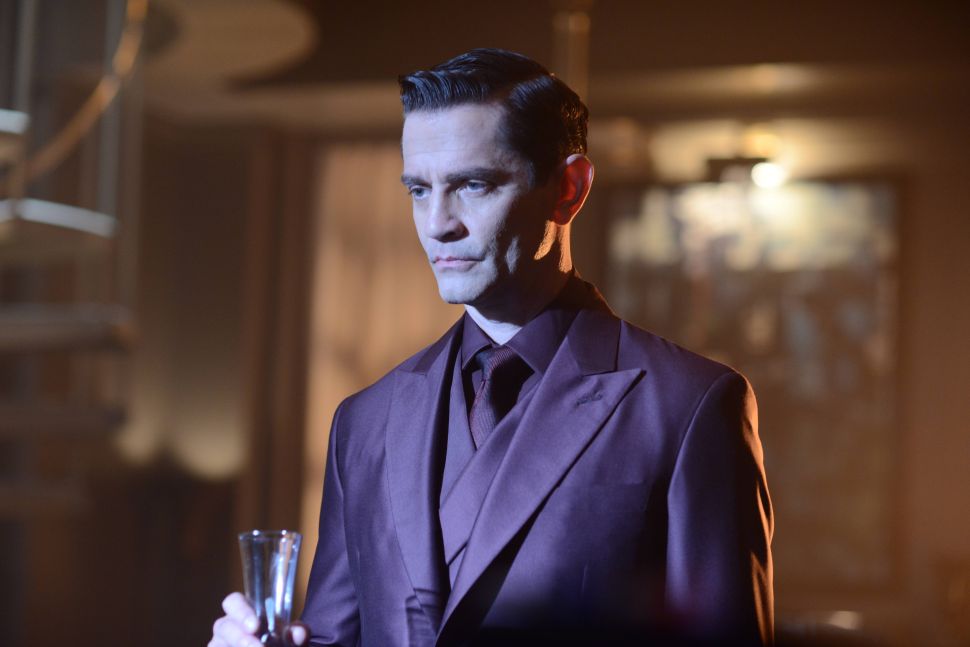