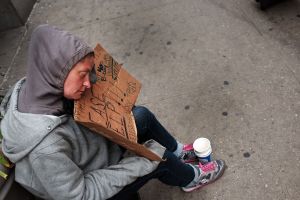 According to data released by the Census Bureau‘s American Community Survey on Wednesday, zero progress had been made to lower the city’s poverty rate since 2014.

The annual survey, which takes a close look at demographics, housing statistics and both the economic and social statuses of Americans, revealed that the city’s poverty rate remains at 20.9 percent. The numbers echo findings from a report by the Community Service Society, published in June of this year, called “Stuck,” which revealed that out of 10 New York City residents, almost six described their feelings of being “stuck” economically. In addition, the New York City Coalition Against Hunger reports that one out of every five New York City residents earns $19,790 a year or less to support a family of three people.

“I think the fact that, despite more than five years of recovery now, the poverty rate is stuck at 20.9 percent is worrisome,” Nancy Rankin, Vice president for policy, research and advocacy at the Community Service Society of New York told the Observer in response to the findings. “In 2007, before the recession, the poverty rate was 18.5 percent. We haven’t returned to that.” She also mentioned that the population in the city has grown during that time.

The Community Service Society’s mission revolves around fighting poverty in New York, researching topics such as problems low-income residents face and unaffordable housing in New York, and Ms. Rankin went on to voice her concerns for poverty among single mothers in New York City. “One of the highest poverty rates is among single moms, and that, in fact, seems to have gone up,” she said. “It was 40.6 percent in 2013, and it’s 41.4 percent so it’s almost twice the rate of poverty for the overall population.”

Ms. Rankin is not alone in her concern for the conclusions drawn by the survey. The New York City Coalition Against Hunger also expressed uneasiness about the findings.

“What’s really historic about the New York City, New York State and national data released (we’ve been counting poverty since 1959, and we have a sense of the trends) is, generally, when there’s an economic recovery, poverty goes down. So it really is startling that it’s just not. Something is fundamentally amiss,” Joel Berg, executive director of the organization told the Observer. “You see a disconnect at the national level between some of the political happy talk about how great the economy’s going and the reality of what real Americans are facing.”

The data comes only one week after Governor Andrew Cuomo publicly joined forces with Vice President Joe Biden to try to rally efforts to raise the minimum wage in New York State to $15 an hour.

Mr. Berg said that the poverty rate would improve immediately if the minimum wage was raised, and he commented on the efforts of the mayor and governor to raise it to $15 an hour. “We have some true progressive leadership here in New York, but you see the limits of what they’re able to accomplish on their own,” he said.

He also shared that even if the minimum wage were raised by a lesser amount, it would have a drastic effect: “Even if they just got a dollar an hour increase: for someone working 35 hours a week, that’s $35 extra bucks a week. If you have two people in a household, that’s $70. If it’s $2, thats $140 bucks into a household.”

At the beginning of the year, Governor Cuomo advocated raising the minimum wage to $11.50 an hour in New York City and $10.50 an hour in the rest of the state.

The pressure to raise the minimum wage comes after other large metropolises in the country have decided to raise their minimum wages to $15 an hour over the course of time, namely Seattle, San Francisco and Los Angeles.