Is he insane or inspired? This is the central question behind Amazon’s new series Hand of God.

The pilot episode opens with a man, naked and speaking gibberish, splashing in a fountain. It’s soon revealed that this is Judge Pernell Harris, a man who may or may not be going off the deep end.

Reeling from the near suicide of his son, who shot himself after he was forced to watch Harris’ wife Jocelyn be raped, Harris has become convinced that God is compelling him to enact a form of vigilante justice; that if he kills the man who assaulted Jocelyn, his son will awaken from his coma.

Series creator Ben Watkins came to the foundation for Hand of God by, “Thinking a lot about zealotry,” he reveals. “It seems that people operate on a higher level when they become singularly focused on something and I wanted to explore the consequences, good and bad, that go with that. I was interested in how people like that affect those around them. It’s important to note, that this kind of fanaticism can happen in all areas and not just religion. It can happen in politics and even in the arts and when someone is like that we either worship them or vilify them. And, the interesting thing is that that person can be categorized both ways, depending on where you personally stand.”

In the initial stages of crafting the storyline, Watkins ran into a few roadblocks right off the bat. “It was difficult to figure out what Pernell’s cause would be. I tried to really think about the issues of our time, like race relations, the 99% versus the 1%, global warming and things like that, but I just didn’t feel that this man would go to great lengths for any of these causes,” explains Watkins. He clears his throat a little and continues with, “Right around that time my father, who had cancer, passed away and I experienced this immense grief and it dawned on me that this man’s journey needed to be triggered by grief.  Everyone can relate to losing a loved one. So even if you don’t agree with what the judge is doing you can relate to why he’s doing it.”

To people who might decide not to sample the series simply because of the religious element included in it, Watkins says, “If you write it off that quickly, I feel sorry for you. Religion is a hot button issue but I want to remind people that the religion in this show is no different than the drugs in Breaking Bad. Yes, Walter White was in the drug business, but would you say the show is about drugs? No. It’s about the man and his family. It’s the same here. We bring up questions about a lot of things – race, politics, right to die, and, yes, religion, but we’re not making statements. We’re saying there’s no right or wrong – a lot of times things that happen are both right and wrong. That’s more reflective of what our lives are like. It puts us out of our comfort zone to say that, but it’s true. If you think you’re going to see an edgier version of Touched by an Angel, you’re going to be disappointed, but if you think you’re going to see a show that definitively says there’s no God, you’re going to be disappointed as well.”

The series features non-linear storytelling, a method that Watkins thought would be easier than it actually turned out to be. “It was amazingly difficult to do but it was gratifying,” admits Watkins. “Initially, I thought it would free us up in a way but you have to adhere to a lot of rules and maintain a center to keep the vision of the story intact. It was always intended to be constructed this way. We needed those different points of view – the judge, then Jocelyn, then Crystal [Pernell’s wife] and so on — to tell this story in an effective way because while the judge is the center of this all of his actions and reactions affect everyone around him.”

Methodology aside, Watkins knows that time is precious and that there is a lot of other content out there to be consumed, so in making his appeal for Hand of God, he says, “This show raises questions and sparks people to think about where they stand and how they feel about certain things. If you’re looking for easy answers, there are plenty of other shows out there. If you want to be challenged and pushed in a way that’s exhilarating, then this is for you.  We’re going to touch some places inside that you may not want to admit are there. Not too many shows do that.”

With all episodes available immediately upon release, Watkins reflects on this new model, saying, “Well, as a viewer, I prefer to see things spread out. I like the anticipation of waiting for the next part. But, I know that now with the way people like to consume content that’s not feasible. Since we knew going in that all of the episodes were going to be released at one time, that changed the way we wrote the series. First, it frees you up a bit because you don’t have to spend a lot of time explaining what happened in previous episodes. Then another big thing is that you can envision someone watching an episode and then going right into watching the next so you can tie them together in terms of momentum and feeling.  But, that’s not to say we just ended one and picked up right where we left off in the opening of the next one. A lot of times we tried to do something that might seem a little disjointed at first, but then that makes sense later on. That way you get to change the tone, the speed, and the pace a bit but still have everything be connected. We had a lot of fun finding ways to do that.”

When asked if he’ll be following along on social media as the series is released to gage public reaction, Watkins laughs a little and says, “If I’ve timed it correctly, I’ll be on an airplane and unable to track any of it. As much as I like to say, ‘Oh I’m not going to pay attention to any of that stuff,’ the truth is that I feel like unless I’m on a plane I won’t be able to resist going online to see what the hell’s happening.”

Is this action insane or inspired? Just like with the series, you’ll have to judge for yourself. 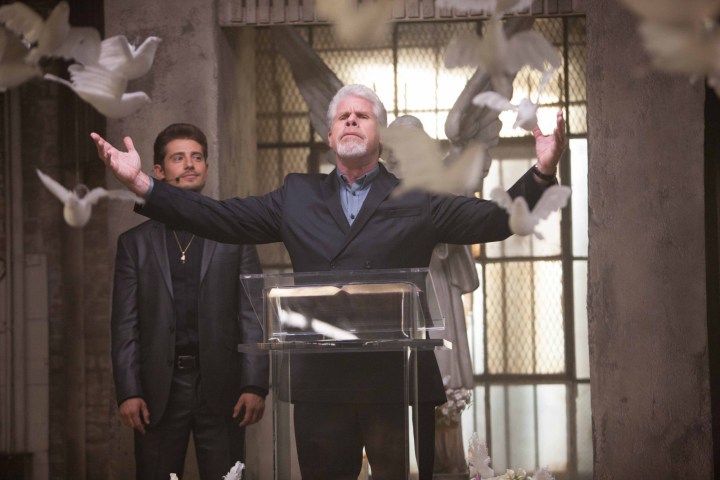