As recently as July, Wisconsin Gov. Scott Walker was widely viewed as one of the three Republicans most likely to win the presidential nomination.

At the top of the heap, despite his struggles on the stump, was ex-Florida Gov. Jeb Bush. Then came Florida Sen. Marco Rubio, a charismatic upstart trying to become the second one-term senator in a row to be elected president. Then–and maybe ahead of them both, and certainly outpacing Ohio Gov. John Kasich, who only entered the race on July 21–was Mr. Walker, a conservative hero for breaking the backs of organized labor in his home state.

Yesterday’s startling fall from grace was blamed on a variety of factors. He wasn’t raising enough cash. Grassroots conservatives don’t actually care that much about unions. He made too many gaffes and knew nothing about foreign policy. He flip-flopped too much. He performed terribly in two televised debates. Billionaire Donald Trump, and all his bombast, sucked the oxygen out of his bid.

But has any candidate in recent history tumbled so far, so fast?

“I think Walker is unique,” said James Thurber, the director of the Center for Congressional and Presidential Studies at American University. “The field is so fluid. It’s hard to predict who the next one is to drop out and how well candidates will perform for a long period of time.”

While political scientists maintain that presidential primaries follow fairly predictable patterns, the 2016 Republican field is special for the sheer number of candidates–before Mr. Walker and Rick Perry dropped out, there were as many as 17–and the unpredictable role of super PACs. Campaigns cost more than ever and are increasingly national in scope. Mr. Walker had counted on winning Iowa to give him a major lift, but today’s presidential campaigns can’t just hop from state to state, hoping for momentum and cash to build along the way.

Mr. Walker ultimately was having trouble paying staff. Mr. Thurber pointed out the governor, who was not “ready for prime time,” made the mistake of shifting too many key advisers from his campaign to his super PAC, which legally can’t coordinate with the campaign. These PACs, fueled by mega-donors, may have upended the traditional order, but they still are barred from paying for a candidate’s staff salaries, travel and office space.

“He could attract a lot of unlimited money,” said Robert Shapiro, a political science professor at Columbia University. “The problem is, he needed money to pay for things like offices on the ground and getting on the ballots in states. What he needed to do was attract direct contributions from small donors.”

If Mr. Walker’s flame out was singular, it was not necessarily without any precedent. Several Republicans and Democrats over the past half century entered a presidential race with momentum and high hopes, only to drop out long before they were expected to.

Two of them may be in this presidential race. Mr. Kasich, a veteran congressman before he was governor, failed miserably in the role of promising underdog when he tried to run for president in 1999 against George W. Bush, the Texas governor with a lot more campaign cash. Vice President Joe Biden, then a Delaware senator, was a highly-touted candidate for the 1988 cycle until he was forced to admit he plagiarized an article when he was in law school. Mr. Biden is now thinking about running for president again.

Recent governors offer more parallels for Mr. Walker’s demise, though none are exactly the same. Tim Pawlenty, the former Republican governor of Minnesota, was a brief favorite in the 2012 race, entering in May 2011 and being touted as a top rival to the eventual nominee, Mitt Romney. After he finished third in an Iowa straw poll, Mr. Pawlenty dropped out in August.

The aforementioned Mr. Perry, the ex-Texas governor, was a leading contender in that same cycle. Unlike Mr. Walker, there was a single, clear moment that seemed to destroy Mr. Perry’s campaign: failing, during a televised debate, to name the three federal agencies he wanted to cut. His campaign lasted from August 2011 to January 2012.

Mr. Shapiro said Mr. Walker’s implosion reminded him of former Mayor Rudolph Giuliani’s 2008 campaign. Once a leader in national polls, Mr. Giuliani, a Republican, could not compete in any of the early primary states. But even he made it further than Mr. Walker.

Long before there was a much-hyped Republican governor named Walker, there was another named Wilson.

Pete Wilson was in his second term as governor of California and a former U.S. senator when he entered the 1996 presidential race. As Larry Sabato, the founder of the Center for Politics at the University of Virginia and a longtime watcher of presidential contests, pointed out, the Republican Wilson was “anti-immigration before it was cool.”

America had already elected a Republican governor from California–Ronald Reagan– president. So why not Wilson?

“It is hard to imagine anyone in a better position to run for the Republican Presidential nomination next year than Pete Wilson, the boyish-looking 61-year-old Governor of California,” R.W. Apple Jr., the legendary New York Times national reporter, wrote in February 1995.

That August, Mr. Wilson kicked off his campaign in Battery Park City. A month later, he dropped out.

His campaign collapsed after poorly-timed throat surgery left him unable to speak for nearly four months. California voters were also incensed because he had vowed not to run for president. He left the race with $1 million in campaign debt.

Mr. Wilson’s inner circle hoped he would run again. “Don’t throw these away,” a campaign spokesman, pointing to “Pete Wilson for President” signs, told the Los Angeles Times after he withdrew from the race.

They never needed the signs again.

“Scott Walker is a good example of what we see in most election cycles,” Mr. Sabato said. “There’s at least one somebody who looks great on paper but is unable compete at the highest level and then just flops.” 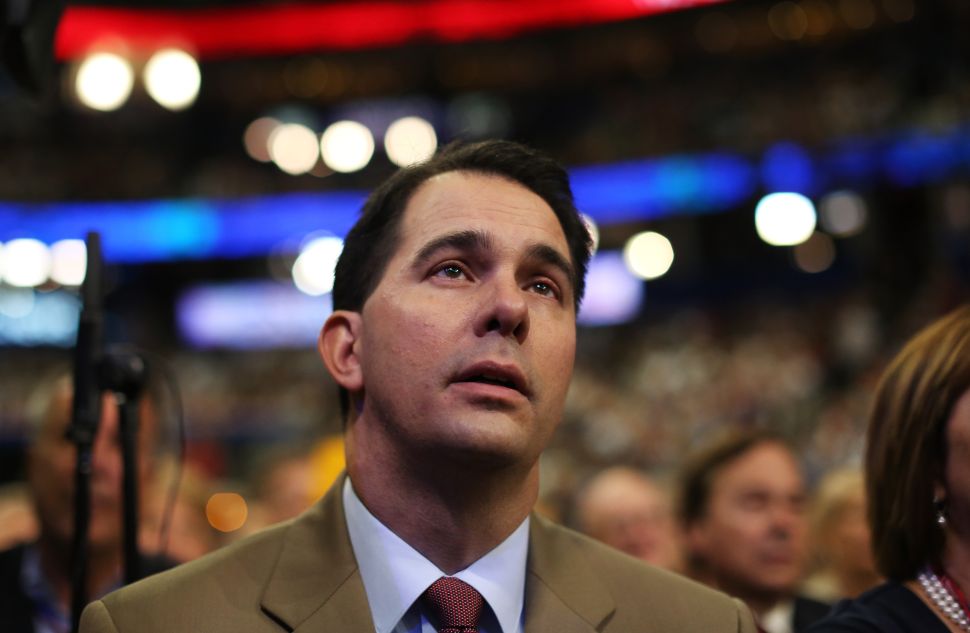