It’s happened. New York Fashion Week has moved. The stylish set is no longer gathering on the famous steps of Lincoln Center (since the court ruled against the way the public park was being used). Instead, the shows will be held at multiple locations. (The catwalks are at Skylight at Moynihan Station, at 360 West 33rd Street in Midtown, and Skylight Clarkson Square, at 550 Washington Street in Soho.).

So, where will you grab a healthy bite? Here’s the lay of the land on the local spots you need to know.

Where: by CHLOE (185 Bleecker Street)

Ambience: Colorful and chic, with communal dining and counter service.

Best Dish: Macro plate of steamed vegetables with brown rice, and dressing on the side.

Ambience: Rustic, and uncomplicated with seats spilling outside.

Ambience: An intimate spot where you’ll cozy up with other diners if you’re lucky enough to get a spot.

Ambience: Contemporary, with sleek gray and exposed brick throughout the restaurant. Neighboring businesses include Wilhelmina, and Rizzoli publishers, so the crowd is always chic.

Ambience: Picture a large space with natural elements like wood, and autumn-inspired décor.

Where: Triomphe, The Iroquois, a Triumph Hotel (49 West 44th Street)

Ambience: You won’t see Birkenstocks here. Men are encouraged to wear jackets, and guests are asked to refrain from using their phones at this tasting menu spot. 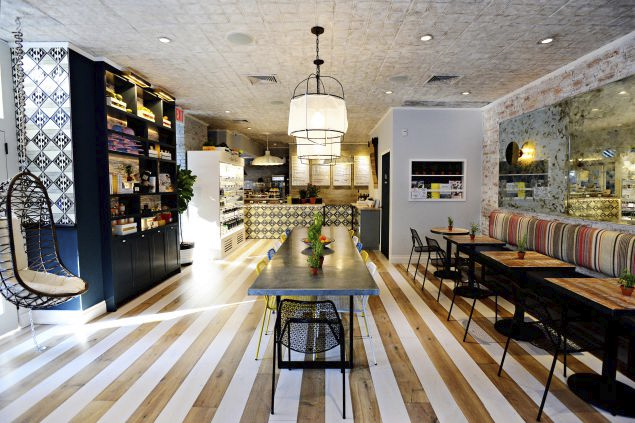