Ernest Hemingway donned many masks, or perhaps it’s more accurate to say that we as readers assigned him several identities. He was the rifle-wielding explorer on safari in Africa, the bearded bullfighting aficionado in Pamplona, the rugged fisherman luring in marlin in Cuba. He was both Papa, Patron Saint of Plain Language, and the overly eager Lost Generation novelist gleaning every bit of wisdom he could from Gertrude Stein in 1920s Paris.

He was also, it turns out, kind of temperamental. In response to nine pages of notes F. Scott Fitzgerald once wrote to him critiquing a draft of A Farewell to Arms, Hemingway scribbled at the bottom: “Kiss my ass / EH.”

An upcoming exhibit at the Morgan Library & Museum (it opens September 25 and runs into January), “Between Two Wars,” features Hemingway’s manuscripts, notebooks, letters and galley proofs, and gives us a deeper, much more personal and more complicated view of the writer who penned such enduring classics as The Sun Also Rises and A Farewell to Arms before he turned 30.

Hemingway, it should be noted, never wanted these letters to be published, and so—thanks to his fourth wife, Mary Welsh, who helped preserve them—we are presented with an image of the writer that he never expected us to see.

“One of the things I was struck by as I read Hemingway was the way his experience of the First World War seems to inflect everything,” said Declan Kiely, who curated the show in collaboration with the Ernest Hemingway Collection at the John F. Kennedy Presidential Library and Museum. “Kind of like when you throw a lot of laundry into the wash and you’ve got a lot of whites but one red handkerchief.”

His letters “are kind of like the backstory to the published work,” said Sandra Spanier, an editor of the Hemingway Letters Project, which is based at Penn State University. (A third volume of a projected 17-volume series of Hemingway’s missives was published this month by Cambridge University Press, dealing with the period of 1926-1929.) “The Hemingway that emerges in the written work and the letters—he’s just a very complex human being.”

He was by turns funny, cutting, annoyed, overly serious, obnoxious and lighthearted—despite the effect the war had on him, or perhaps because of it. Hemingway, who was raised in Illinois, served as an ambulance driver on the Italian front during World War I; he saw many terrible things, and in 1918 he was wounded and sent home. During World War II, he worked as a foreign correspondent for Collier’s magazine.

In a 1944 letter to Welsh (whom he affectionately called “Pickle” and met in London), from Northern France, he apologized for the lack of adjectives he knew—something of the writer’s trademark—and signed off, in a kind of lovingly avuncular way: “Your Big Friend / E. Hemingway / War Correspondent.” In another note, probably written a year later, he said to his wife, “I love you too much to write more about it. It is a thing to do in bed, not on paper.”

“He’s 45 or 46 at the time, and he almost writes like a teenage boy,” Mr. Kiely said. “He’s a tender letter writer, and yet he’s the kind of guy who can go out and kill game and big fish,” Mr. Kiely added. “These seem to me very contradictory impulses.”

Mr. Kiely said the show takes its name from T.S. Eliot’s apocalyptic interwar poem “Four Quartets,” which contains the line “Twenty years largely wasted, the years of l’entre deux guerres.” Mr. Kiely added that the young author was, it seems, teaching himself to write during the era the museum deals with, and so his manuscripts are almost painfully marked up.

Hemingway was incredibly punctilious when it came to revising. He wrote out 45 titles for A Farewell to Arms, for instance, before settling on one; the rejects included Love In War, Sorrow for Pleasure and World Enough and Time.

In 1940, Hemingway told the publisher Charles Scribner how he learned to be economical with words—both literally and artistically. “I always count them when I knock off and am drinking the first whiskey and soda,” he said. “Guess I got in the habit of writing dispatches. Used to send them from some places where they cost a dollar and a quarter a word and you had to make them awful interesting at that price or get fired.”

Hemingway corresponded with a slew of writers, including John Steinbeck and John Dos Passos, and they often wrote to him admiringly. “Hay Hemingstein what are you going to do about this?” Dos Passos wrote from Brooklyn in 1926 after they’d spent the summer in Spain. “You lucky bastard and bastardina and bastardino. You’re all of you at Pamplona—dancing the riau riau. Well think of the poor heathen in foreign lands.”

“[P]art of the artist’s reward,” Dorothy Parker wrote apologetically to Hemingway in 1929, “is having shit like this written about you,” after she’d published a profile of him in The New Yorker. (“Yes, he does talk like he writes,” Parker wrote in the profile. “In fact, liker.”)

Because the exhibit doesn’t deal with Hemingway’s suicide, we may be presented with a sunnier side of the author. (He shot himself in Idaho in 1961.) But you do get a good sense of the emotional stakes of his life, and some of his letters allude to a deeper dissatisfaction about the world—as well as an enchantment with its mystery.

“You cant do this without putting in the bad and the ugly as well as what is beautiful,” he wrote to his disapproving parents (using no apostrophes) in 1925, in defense of his work. “Because if it is all beautiful you cant believe in it. Things arent that way.” 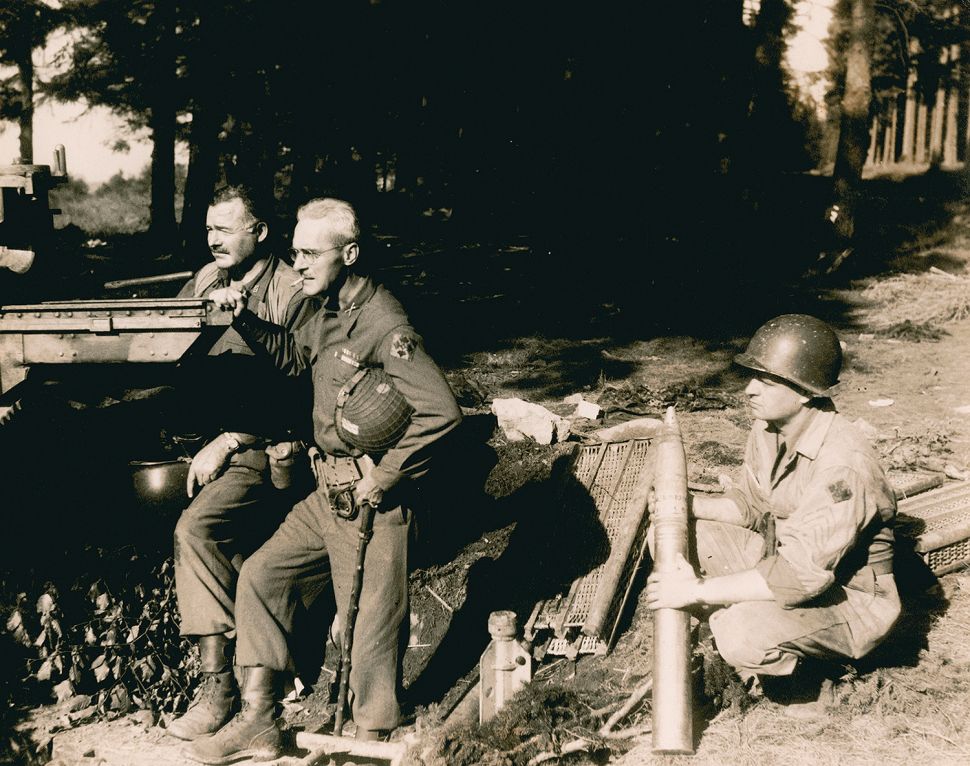