The Pope is here. Pope Francis is on his first U.S. trip through Washington D.C., New York City, and Philadelphia and Observer Arts wants to be the Pontiff’s guide to religious art during his stay.

He’ll have a busy itinerary; he’ll be stopping to meet with government officials, hold religious services, and meet with members of the public. But hopefully he’ll have some time to check out some art as well.

Below, we asked museum officials for collection highlights (both religious and non-denominational) that they might recommend for the Bishop of Rome. And some picks are just timely favorites.

The Rothko Room, at The Phillips Collection, Washington D.C.
The Phillips Collection’s Rothko Room is an oasis of meditative reflection amid the bustling capital. The dimly lit room was built in 1960 just to hold four Rothko paintings purchased by collector Duncan Phillips, and is the only installation of Rothko’s paintings to include feedback from the artist himself. At Rothko’s suggestion, only one bench is provided for viewing.

The Cloisters Museum and Gardens, The Metropolitan Museum of Art
Opened in 1938, The Cloisters are one of New York’s greatest treasures, with a trove of historically important medieval artworks. Tucked away in Fort Tryon Park on the northern tip of Manhattan, the complex incorporates sections of the 12th century Benedictine monastery of St-Michel-de-Cuxa, once located in Catalan, the now-destroyed upper section of Montpellier’s Saint-Guilhem abbey, the Carmelite convent of Trie-en-Bigorre, near Toulouse, as well as elements from several other significant European cloisters sites. In addition to the many religious works from the 12th through 15th centuries on view, the Met’s northern branch is showing the special exhibition, “Treasures and Talismans: Rings from the Griffin Collection,” which includes several bishops’ rings circa the 7th-8th and 13th centuries, and a 16th century oak portrait of Saint Gregory as Pope.

Marc Chagall’s Crossing of the Red Sea, at The Jewish Museum
Pope Francis has said that one of his favorite artists is Russian-French modernist Marc Chagall. On view at the Jewish Museum is Chagall’s 1966 lithograph of the bible’s story of Exodus, which depicts Moses leading the Jewish people through the parted red sea. In 2013, the Vatican lent the museum several works for its exhibition “Chagall: Love, War, Exile.”

Tibetan sculpture of Green Tara, at The Rubin Museum of Art
Pope Francis has been outspoken in his views on climate change, from encouraging alternative energy use to promoting public transportation. For that reason, the museum suggested that while in the city, the Pope might want to view a 13th century Tibetan brass statue of the Buddhist deity Green Tara, on view in the exhibition “Gateway to Himalayan Art.” The deity’s symbolic floral motifs are often associated with greenery and the environment, and she is generally representative of the potential for life and change.

Blasco de Grañén’s Saint Catherine of Siena before Pope Gregory XI, at The Barnes Foundation
A little papal history is on view in the Spanish Gothic painter’s tempera and gold leaf painting, which features Pope Gregory XI. Gregory was the last leader of the Avignon Papacy, a period of time in the 14th century when popes ruled from Avignon, France rather than from Rome.

Robert Indiana’s AMOR, at The Philadelphia Museum of Art
Robert Indiana’s 1998 sculpture AMOR is on loan to the Philadelphia Museum of Art in honor of Pope Francis’ visit to the city. The piece is a late edition of Mr. Indiana’s world-famous LOVE sculpture, which was installed on Philadelphia’s John F. Kennedy Plaza—commonly referred to now as Love Park—in 1976, and has since become a city icon. On Tuesday, the museum unveils AMOR’s temporary installation on the East Terrace, overlooking Benjamin Franklin Parkway, where the Pope will hold Sunday’s Papal Mass. It’s an added bonus that “amor” happens to be the Spanish and Latin word for “love,” the Pope’s native tongue and the Church’s ceremonial language. 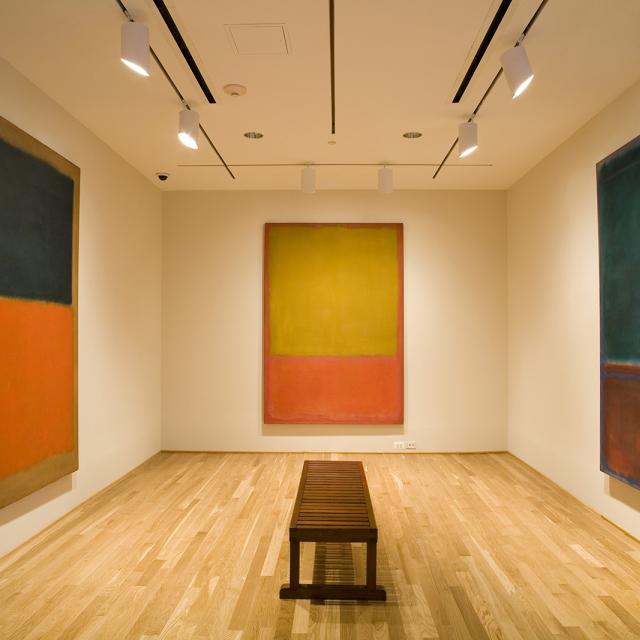