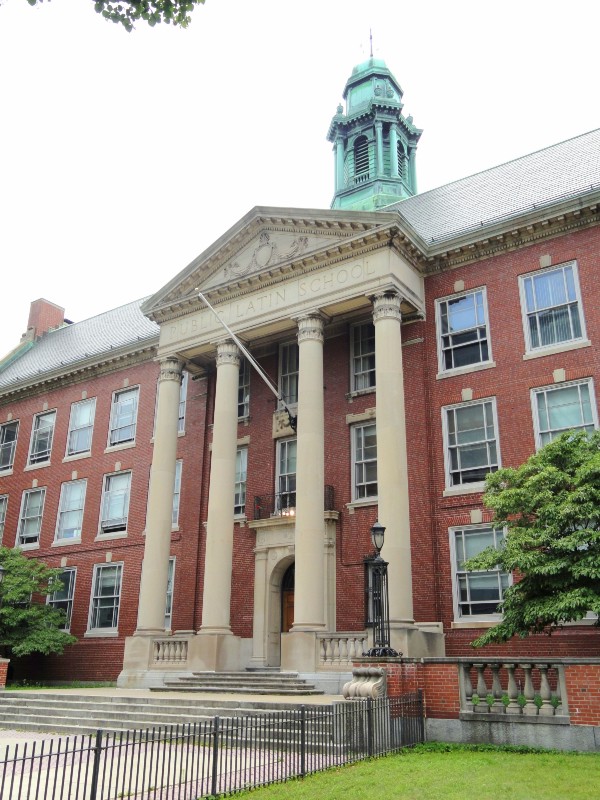 Our classroom is tucked up into the third floor of an elegant red brick building with Ionic columns that make you feel smart even if you’re just looking for a place to nap. Fluorescent bulbs hang high in the ceiling and cold formica tables form a rectangle we’ll barely fit around. I’ve staked out the corner near the A/V controls—the projector, the volume knob on the speakers—but otherwise, the layout seems fairly democratic.

It was hard to get into this class. Students sent songs and sketches and emailed pleas with logical reasons why it fit with their majors and how they envisioned their lives. I made cuts based on a 50-word petition and a link to a recording of theirs, hoping in each case that I’ve done the Future some service.

They fill the room with stickered-up laptops and bottles and news of dorm room switches and class cancellations. They pack themselves around the table, more comfortable with each other than I am with my own family at Thanksgiving. I will teach them about songwriting. I have no idea what that means. No one stops me.

I don’t actually believe in pop songs, and it’s hindered my career as a songwriter. Pop songwriting is a calling, and though I’m touched by it, I never really got the call. Example: I have a friend, Chris, who saw Jesus walk out of his high school locker. They spoke. Now he’s a minister. That’s a calling. Me? Nothing. I feel like I’ve just pressed a pay phone to my ear and conversed with destiny’s dial tone, blah blah blah, lots of hand waving for the benefit of those in the vicinity.

The real truth is that I love the last songs on albums, the ones where the agendas and obligations lift like the dampers of the piano, allowing all creative strings to vibrate at once. This is when the artists reveal themselves, tell their inside jokes, and foreshadow their ambitions.

I know that the whole idea of an “album” is a construct— once upon a time, album length was determined by the amount of music a graphite disc could hold—and if that construct disappears completely, no one will even know what I’m talking about. There won’t be “last songs,” there will only be “unpopular” ones. UnPop music. Maybe that’s what I like.

My own favorite song—I have favorites, the way your parents have favorite kids—is called “Coney Island,” a short instrumental piece featuring downstroked pawnshop guitars, a meandering upright piano, and the sounds of a beach with, yes, seagulls. It stands as the least downloaded, streamed, cared-about song in my repertoire, according to online metrics, so, it is, by that crowd-sourced measure, my worst song. But that’s not why I like it most. It’s because it is transporting, personal as a secret, and that’s what I hope for. There have been moments listening to music when, had I been invited to simply walk into the speakers and never look back, I would have accepted without a second thought. That was back when I was a closet sociopath, and the exact age of my students. They are my insanities, fractured and multiplied, and when the classroom door clicks shut, I’m counted on to address them.

I make it clear in Week One that this class has parameters. I say that we will work within a loosely defined framework known as pop music. We all have a general notion of what that is, so I tell them:

Don’t throw your guitar down the staircase and tell me you’ve written a new song, because the artist in me will agree. The problem is only that there is no criteria by which I can inform or instruct you on that impulse, so that would be an example of something that falls outside the scope of the course. Informally, perhaps over a crisp ginger ale, could we talk about whether the staircase should’ve been carpeted? Could we title it something snappy like, “The Wisdom of the Staircase,” or “Soundtrack to ‘Nude Descending a Staircase’”? Oh, sure. I have all day for stuff like that. I am, after all, the one who assigned a book of blank pages.”

I have assigned a book of blank pages for them to fill every morning with whatever meandering thoughts they may have. I’ve taken cues from a few books for this, and given the students who require it an artificial set of goalposts: write about a single topic of your choosing each morning; write for ten minutes only; write for three pages only; begin with a quick sketch of your surroundings, etc. Most have no idea what a gift they are giving themselves. I make it mandatory.

I wear a collared shirt, and I’ve shaven, as I will before every class. I’ll make sure of it. My syllabus is clear and states that I don’t take guff. Didn’t hand in your weekly song? It’s a half-grade off for every day it’s late. I was talked out of knocking it down a full grade, but even at a half, my point is made.

“Nothing is more inspiring than a deadline!” I enthuse, commiserating.

The forms are not hard, the way an oven is not hard to operate. It’s the getting something edible to come out of it that is the trick. There. That’s basically the course I teach.

Sadly, the fact that there are rules causes the first set of revolutions.

“Who says there needs to be rules?”

“Why must we be forced into molds?”

“How does anything ever innovate that way?”

“You’re just telling us to copy things that already exist? How is that creative?”

“How are you creative?”

I recognize their fear, if only because I remember it, myself. Form is terrifying and reductive. I don’t rebut, and I don’t dismiss. I change tack, to “the charts,” that same crowd-sourced metric that organizes my own repertoire in order of “quality.” I map out the top five songs of that exact moment in this exact country so they can see the song forms just sitting there, simple and agonizing on a page. A A B A. Verse, chorus, verse, chorus, etc. Each song has a map that is not difficult enough to blame for those who can’t do it well.

This drives them bonkers—Kurt Cobain was such a wild, guitar-throwing mess, how are his songs organized so fastidiously? And I risk losing some of them to a fact of pop songwriting: There is structure. I wonder if I’m derided behind my back as a fascist to those student-writers who don’t understand that they might not have anything to say, yet. That’s fine. Keep living, keep dragging your pen across the page. That alone gets you to B/B+ in my town.

I balance structure with crazy. I tell them this is a safe place to write bravely, and some believe it.

I hand out John Cage’s “10 Rules for Students and Teachers” to set a tone. (Rule Four: Consider everything an experiment; Rule Six: There is no win and no fail. There is only make; Rule Ten: We are breaking all the rules, even our own rules and how do we do that? By leaving plenty of room for “x” qualities; etc.)

To give the most aerial view possible, I use a George Saunders essay entitled “Vonnegut in Sumatra” that offers a very elastic definition of the goal of art. In the essay, he describes art as a box we enter and exit, with the goal of the artist being to make that journey from A to B both nontrivial andundeniable. That’s it. Deliberately and satisfyingly vague, it is a rule without a guideline. An objective with minimal dogma. I get the occasional hand in the air, and the question, “Who?” I don’t know if they mean Saunders or Vonnegut, and together we come to an understanding of our starting point.

And finally I give them my recommendation: There is no need to chase the market, here. If you were to do that with food, the crowd-sourced fact would be that McDonald’s is the best restaurant in the world. Songwriting is an analogous art form.

This is my bias, one I’ve never proven to my satisfaction in the marketplace, and maybe that cripples my argument. But follow the argument: Do you know how many copies of Mein Kampf have been sold? (Follow the argument.) Hitler was a great writer and thinker. (This is not my argument. This is the argument for using capitalism to determine what is important.)

So, following the argument, if I sat on a pressed flakeboard chair from IKEA eating a Big Mac and reading “Mein Kampf,” you’d say “Yeah. That Mike. Gotta hand it to him. He knows quality.”

I’m exhausted at the end of class. I want them to find their unique voices, and to know the rules well enough to bend or break them. I want them to know where the lines of the playing field are, and then I want them to play in two feet of snow. I don’t think their long-term play is to make better Big Macs. Here’s a shocker: Being unique is the new craze. Get on it, kids! Finding your voice, and being able to deliver it, too—that’s the revolution. This is not new, and is always new.

Like them, I’m also looking for a horizon from which I can set my bearings. I hold the dread at bay, I think, but they might have an inkling. I spin plates; I am unsure; I press on. I wear collared shirts so as to be taken seriously. I’ll see them yawn in class when they are hung-over. I’ll hear the ones who have been beaten up too early in life, pouring their confusion out in lyrics I’ll feel almost compelled to report to the police. I’ll hear blinding talents who are compiling songs like rocket fuel, waiting for the clouds to part. I’ll hear people wasting their parents’ money, dreaming of being crowd-sourced-famous, crowd-sourced-important like the Big Mac, Mein Kampf, IKEA, all of it. The future of landfill.

But the songs! I’ll listen to their late-night cell phone recordings, and relish the distorted ambience that surrounds them as they play their weekly assignments. I’ll bask in the reverb of dorm bathrooms, the chirp of incoming text messages from unsilenced phones, the inconsiderate roommates, the clutter of the life they’re writing through, and writing about. There’s no denying it: the songs immediately will begin tightening, gaining focus and confidence. Students will add them to their set lists and play them in public places where they’ll make money, fans, girlfriends, boyfriends. They will be make this world a richer place to live. Yeah, I said it. Richer. 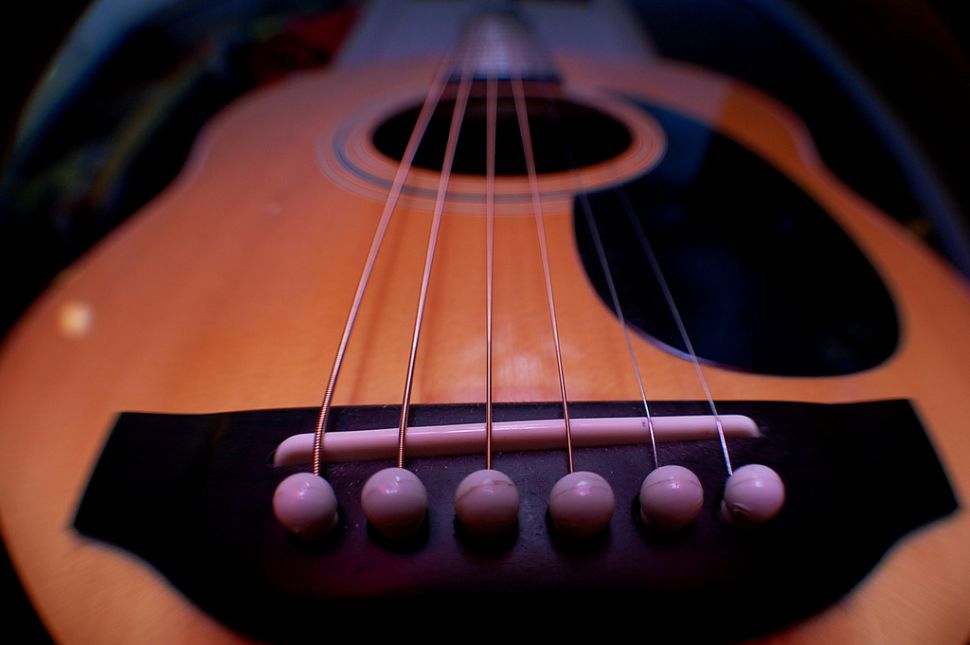