Ugh there is nothing good in today's LA Times…

There’s so much good television these days that the Emmys are no longer a night to determine the best shows. They’re a ratings event to tweet along to—and that applies for the stars as much as it does the viewers.

Actors, writers and other TV people have been sharing Emmy-related content on social media since the ceremony on Sunday night. This is especially true for the winners, including Travon Free of The Daily Show, whose post-Emmy Instagramming has been humorous and of top notch creativity.

I totally earned these. That's what I'm telling myself eating donuts at 1am.

Even during the show, Mr. Free was cracking jokes.

Where you guys watching the game? #Emmys

Chances are Travon Free isn’t who you think of when you think of the show. In fact, you may have never heard of him. His post is behind the scenes—He’s a writer for the show and has been since October 2012, when he went to the set for what he thought was a casual visit and was surprised backstage when Jon Stewart offered him a full-time writing job on the show.

After this picture I kindly urged him to finish the last damn Game of Thrones book. He obliged and then gave me a coin that was Westeros currency. I'm not making that up. The coin is in my pocket right now. #Emmys #LastNightWasMadReal

A look at his posts, though, gives us a more personal look at the kind of creativity going into the segments we tune in for Monday through Thursday nights. It also give us a deeper look at the very humor that won The Daily Show the Emmy nods for Writing for a Variety Series and Outstanding Variety Talk Series.

Mr. Free also posted a red carpet photo with Trevor Noah, who will begin hosting the show on September 28. This, of course, was less of a joke and more of shoutout to the new era of the show. 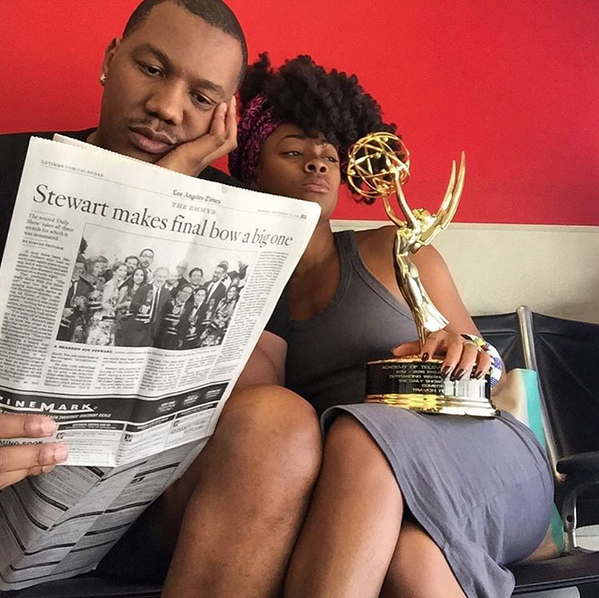