Despite an email scandal that refuses to go away, former First Lady/Senator/Secretary of State Hillary Clinton is still viewed as “inevitable.” And she may very well be, but she is not “inevitable” in the same way she was when she was first hinting at a second presidential run (for some readers, that first hint came on June 7, 2008; for others, it came last year).

That isn’t to say she doesn’t have a chance, but the path to the White House for her at this point appears to be similar to that of her husband Bill: A win with less than 50 percent of the vote. And that might happen even if it is not Donald Trump running as the third-party candidate.

Clinton’s approval rating peaked at 66 percent in 2012 shortly before the September 11 attacks on the U.S. embassy in Benghazi, Libya. Her approval has been declining ever since, especially since the advent of her ongoing email scandal

Her approval rating throughout her political career has always, unfortunately for her, been tied to how much she is in the public eye. When she and Bill first entered the White House, she was as popular as any First Lady, but toward the middle of her husband’s tenure, her popularity cratered – in some part thanks to her unpopular healthcare plan nicknamed “Hillarycare.” When the Monica Lewinsky scandal broke, her approval rating skyrocketed as she was seen as the victim of a philandering husband.

After leaving the White House and being elected to the Senate, her approval steadily declined but was never perilously low. She received a bump when she began her campaign for the presidency in 2008, but the more appearances she made during the primary the further her approval fell. She received a boost when she was named secretary of state, as the position, though prestigious, is not one of the more popular with the American people.

It is when Clinton is not in the spotlight that she is most popular. That may sound like a sexist “women should be seen not heard” observation, but it is a problem unique to Hillary. The same issue does not and has not existed for other First Ladies such as Laura Bush or Michelle Obama, although they haven’t sought office after leaving the White House as Clinton has.

Since the digital age allowed Americans greater access to the First Lady, their approval ratings have been high. Clinton, the first digital-age First Lady, did not register the same approval ratings as Ms. Bush or Ms. Obama, and her negatives were always two to three times that of her successors, reaching a high of 40 percent in January 1995. Conversely, Ms. Bush’s highest disapproval rating was 13 percent, and Ms. Obama’s highest was 8 percent. Neither Ms. Bush nor Ms. Obama’s approval rating fell below 60 percent during their time in office, while Clinton’s did – to 54 percent in 1995. That’s obviously still high, but it is low for First Ladies.

The fact of the matter is that Hillary does not have the warmth and charm of her husband. She comes off as entitled, and routinely scoffs at a press that is more on her side than she seems to believe.

Now, an approval rating at this stage in a presidential election usually isn’t representative of a candidate’s potential. But for Hillary Clinton, it most certainly is. That is because unlike Clinton’s rivals both in the Democratic primary and the Republican primary, she does not have to contend with low name recognition.

Anyone old enough to vote in 2016 has heard the name Hillary Clinton – whether they heard of her from their history books as the First Lady (and now I feel old), or as the senator from New York or as a 2008 presidential candidate or as the secretary of state under President Barack Obama. The notion that there is a population out there that could be swayed into her corner if they just learned more about her is laughable.

The last president to be so well-known to the American people was George H.W. Bush, having just served as vice president for eight years under Ronald Reagan. At this point in the 1988 election, H.W. Bush had an approval rating of 62 percent, far higher than Clinton’s.

Like any high-profile politician, Ms. Clinton has a devoted fan base that either refuses to believe she has done anything wrong by using a private email address on a home server to send and receive classified intelligence information or acknowledges wrongdoing but believes what she did just isn’t that bad. But outside of that fan base, voters are most likely to describe Ms. Clinton as a “liar,” “dishonest” and “untrustworthy.”

Back in 2008, respondents in a similar poll described then-Senator Obama as “inexperienced” yet “intelligent” and “youthful.” Inexperience can be overcome with higher name recognition and competent policy proposals – being thought of as a liar is a far more difficult obstacle. It’s one thing to believe all politicians lie, it’s quite another to believe being a liar is one’s defining characteristic.

And Ms. Clinton hasn’t been doing herself any favors in her responses to her email scandal. Her first press conference on the matter in March came after nearly a week after the story broke that she had exclusively used a private email address during her tenure as secretary of state. The gap between the story and her response made it appear as though she and her team thought the scandal would go away on its own and that she could just ignore it without comment.

At this point, even if Ms. Clinton were cleared of any criminal activity or wrongdoing, the notion that she so cavalierly disregarded information that could and should have been considered potentially classified will linger. This was a woman in charge of some of the nation’s biggest secrets, and she appears to have mixed those secrets with conversations about yoga.

It would take a major event to boost Ms. Clinton’s approval rating before the election, and outside a family tragedy or a country whose relations she has been tied to through her previous position (such as Libya) becoming a shining example of democracy and freedom, it’s hard to imagine such an event occurring.

Hillary Clinton may still be inevitable, but it will not be the smooth march to the White House she and the rest of America originally envisioned.

Ashe Schow is the Senior Political Columnist for the Observer and a commentary writer at the Washington Examiner. @AsheSchow 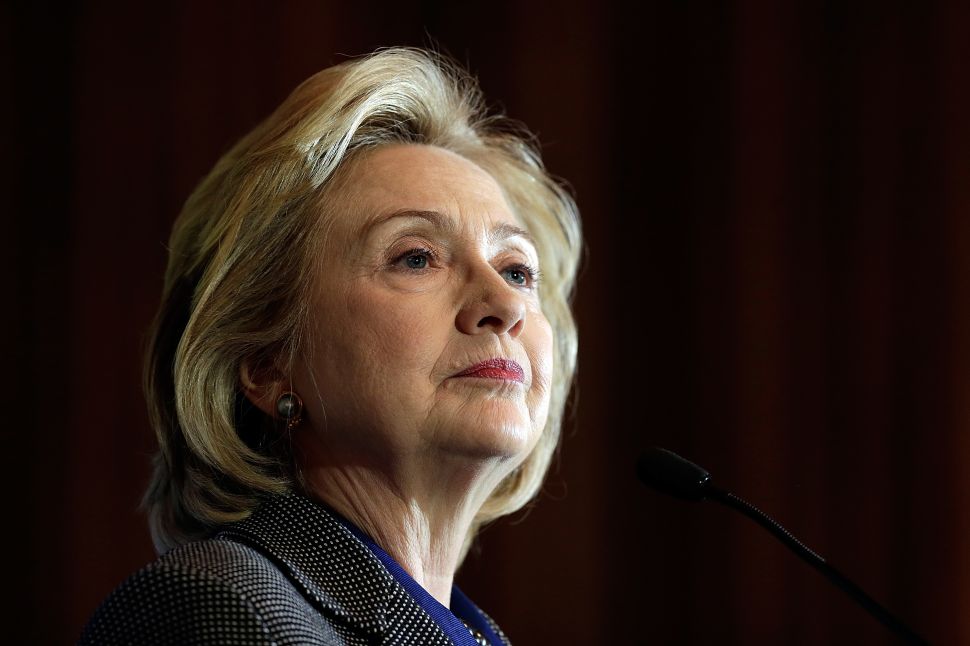