Anyone that thinks artists are immune to either a gentle boost or a subtle snub from the art establishment is fooling themselves. Context and circumstance can be artists’ foes as easily as their friends, and no one knows that more than McArthur Binion.

The 70-year-old Chicago-based artist has been quietly crafting Minimalist-influenced paintings since the early 1970s, with his signature variance of oil stick marks on wood or aluminum surfaces that share the spirit of other painters from that era such as Brice Marden and Robert Ryman.

“The part I took from Minimalism is that you want to do your own stuff in your own image,” Mr. Binion says in the release for this show, and this is what he always did, as one can see in the exhaustive yet delicate marks of Icecicle: Juice from 1976, which emanate an uncanny shimmer.

Mr. Binion was born the 11th child of a cotton farm owner in Macon, Mississippi where he helped to work row after row of soil, a birthright that paid off both aesthetically and ethically. He settled in New York City as the Soho art scene was dawning in the early seventies. There he befriended future household names, from Jean Michel-Basquiat to Sol Lewitt and his career seemed to start off well enough. He was chosen by Mr. Lewitt to be in his co-curated group show at Artists Space in 1973. But as both conceptualism and identity-based art gained in prominence, Binion’s career stalled; his feathery touch was seen as passé in both camps.

After the sizzle of the monied 80s quieted down, Mr. Binion moved to Chicago, and despite spending over 20 years in New York City, where he produced a bounty of beautiful works, he somehow managed to slip past almost all of the city’s famed institutions, and commercial galleries.

His lucky break finally came in 2013 when revered Chicago dealer Kavi Gupta saw his work and immediately wanted to show his abstractions from the 70s–a show that brought about sales and serious acclaim.

But that’s not where the story ends.

Having been around the block, Mr. Binion was undaunted by his newfound attention and decided to make an inspired change. He started to cover his panels with photocopies of three things: his Mississippi birth certificate, his passport ID, and his address book, each of which would form the basic structures under his new series of intricately layered oil stick grids.

This new group of paintings, called the DNA series, can be found on view at Galerie Lelong through October 22. The fruits of his efforts are not only gorgeous (visually austere yet graceful, despite their grueling reiteration) but very topical.

Fellow African-American abstractionists like the painter’s friend Stanley Whitney—who has a show of his wavy grids currently up at the Studio Museum in Harlem—and Jack Whitten—who showed his lush abstract paintings at Alexander Gray Associates in 2013 to raves—are also being rediscovered one by one as personal and painterly alternatives to Identity Art are sought.

Small works like MAB: 1971: VIII, 2015, almost naively ram a puzzle of Mr. Binion’s portrait ID photos (the kind we all know and don’t necessarily love) directly up against the artist’s overlaid lines of oil bar, but the outcome is phenomenal. Binion’s work isn’t specifically race-related, but the pictures of the artist in his youth (with rounded afro) take stock of unaccounted for signifiers that collapse into his own particular story.

Like many successful artists that fit the modernist profile, Mr. Binion makes work that is a study in oppositions: line and shape, figure and ground, image and abstraction, copy and original, color and black & white. His modus operandi is to somehow magically blend an assault of binaries into a single, unified emblem of the unique and complicated self. Though it was a slow process, his lifetime of rigorous self-examination was eventually appreciated. Welcome home, McArthur. 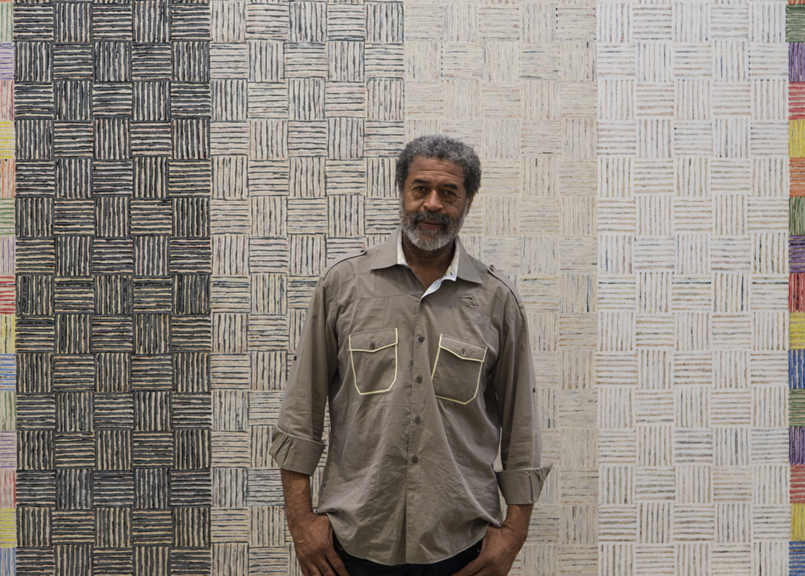