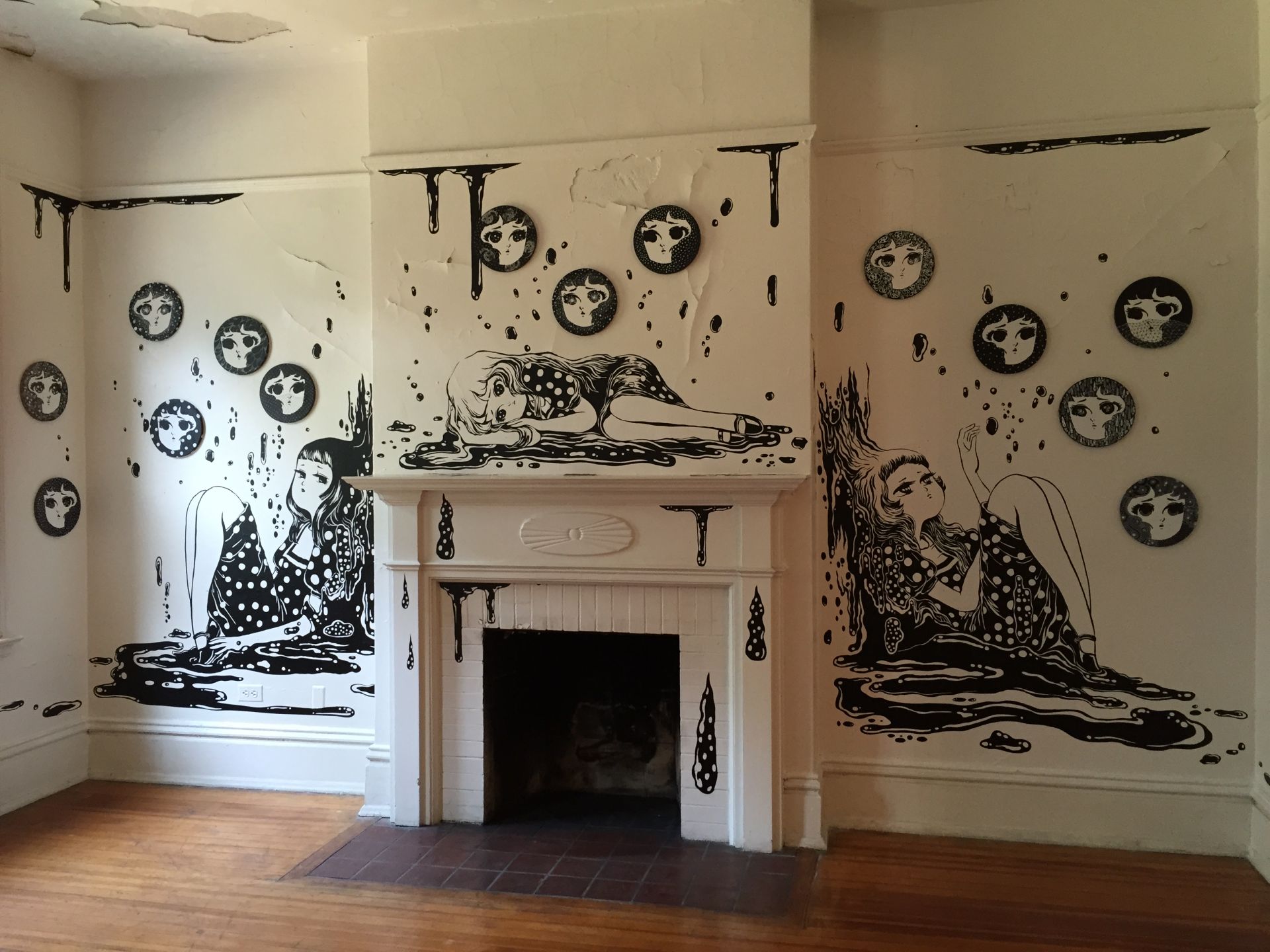 Almost all of the artworks are for sale with a vast price range from $150 to $30,000. Prices aren't posted, but signs throughout the exhibition encourage interested collectors to text the artist's name to a number provided for immediate assistance from a sales rep.
Joohee Park (StickyMonger), 'Hole & Eye,' (2015). (Photo: Alanna Martinez)
almartinez1224 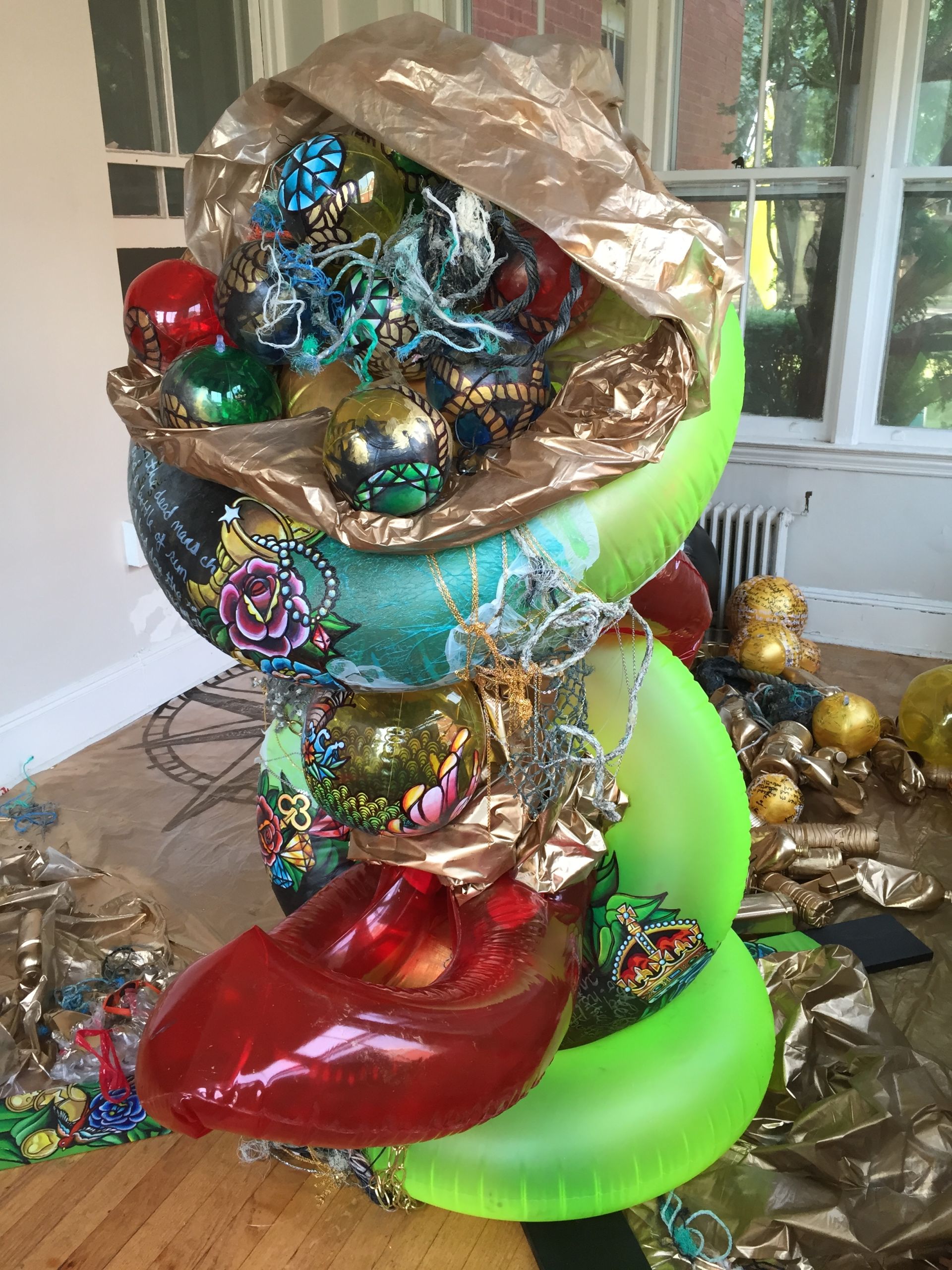 Smaller works, editions and prints, t-shirts, totes, and show catalogues are for sale in the Fair's ArtShop, the unofficial hub of the fair located in building 404A, at a more affordable range of $10 to $400.
A room of inflatable installations by Kara Daving. (Photo: Alanna Martinez)
almartinez1224 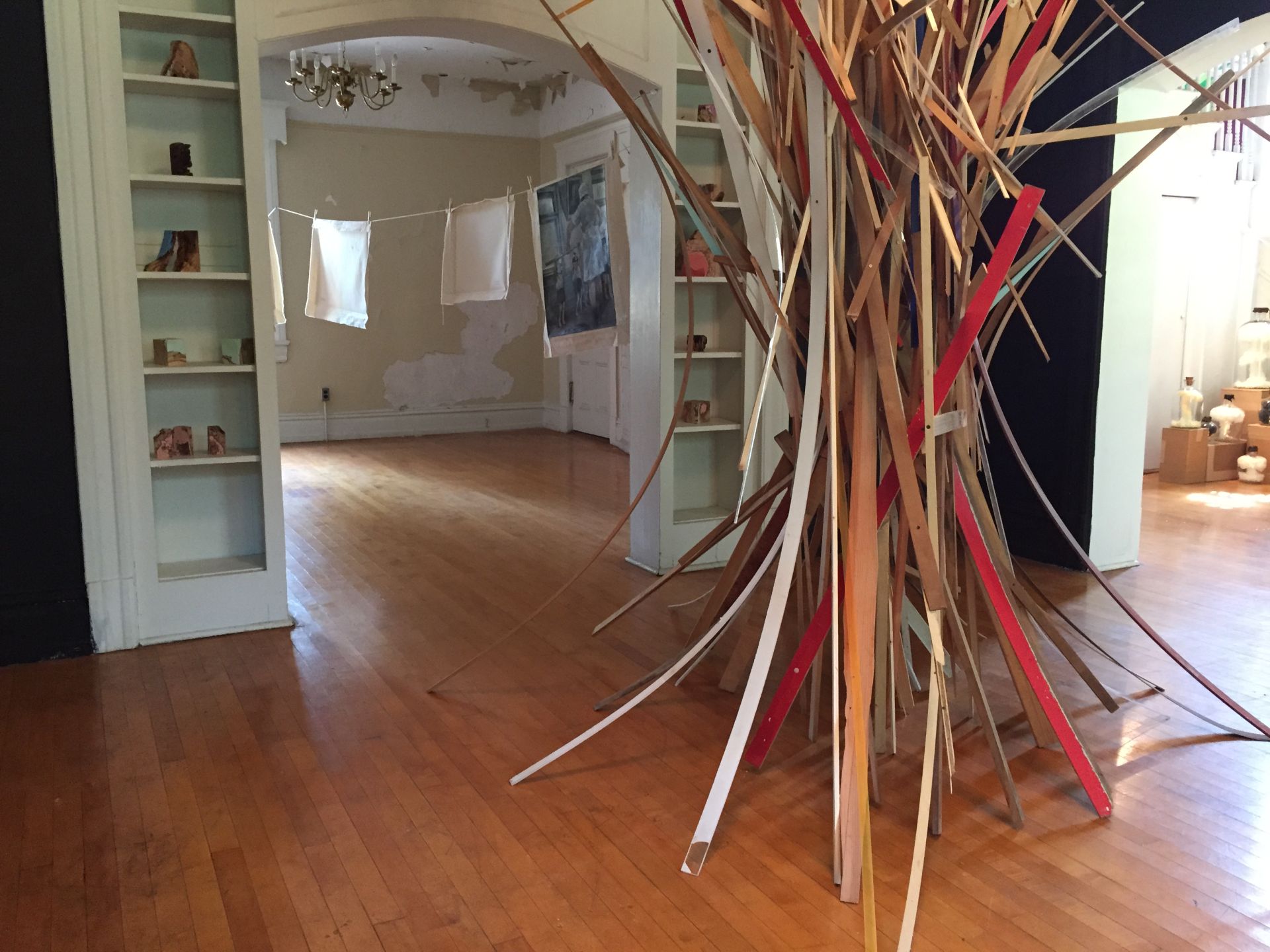 Works on view run the gamut from oil paintings of the subtle textures and colors of human skin by Francesca Facciola to ceramic sculptures of human-animal hybrid figures by Sarah Louise Davey, and glittering crystals miraculously grown on animal skulls by Taki Fey to a room-size installation comprised of candy-colored inflatables by Kara Daving.
Installation by Sam Horowitz. (Photo: Alanna Martinez)
almartinez1224 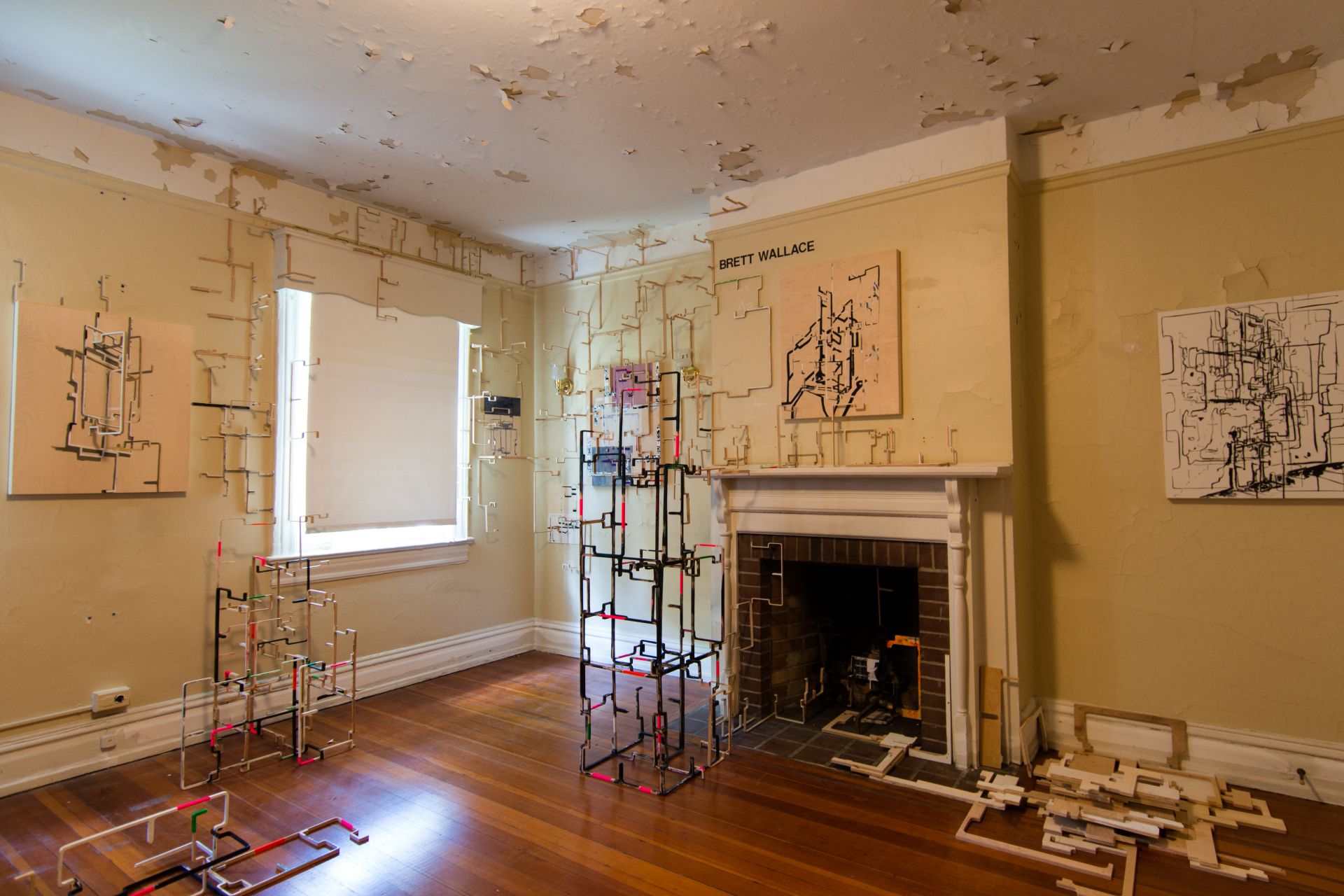 "Every year we are excited to see all the diverse visions that come our way," Antony Zito, 4heads co-founder and communications director, told the Observer. "It's quite an explosion of voices during the installation process."
Installation by Brett Wallace. (Photo: Ed Grant, Courtesy Governors Island Art Fair)
almartinez1224
Advertisement 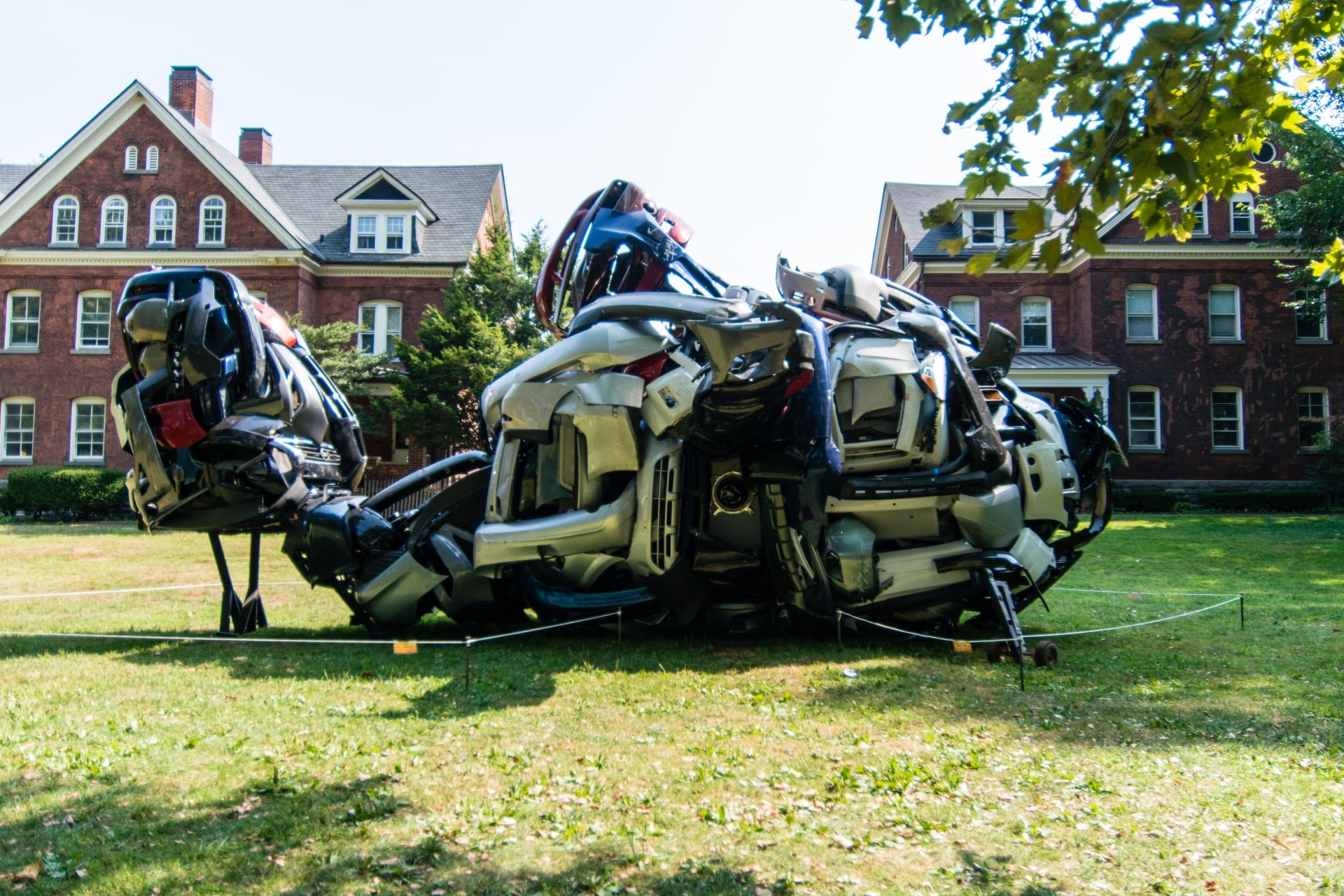 Among them, Uzbekistan-born sculptor Aleksandr Razin whose massive outdoor work made of car bumpers, titled Universal Butterfly, is a showstopper. (The fair "boosted its 'call'" for outdoor sculptures this year, according to Mr. Zito.) If you peer carefully through a porthole tucked away on one side you'll catch an optical illusion formed by slivers of light cutting through a shaft in the sculpture's interior—the effect, according to the artist, looks much like a fluttering butterfly.
'Universal Butterfly' by Aleksandr Razin. (Photo: Ed Grant, Courtesy Governors Island Art Fair)
(Photo: Ed Grant, Courtesy Governors Island Art Fair) 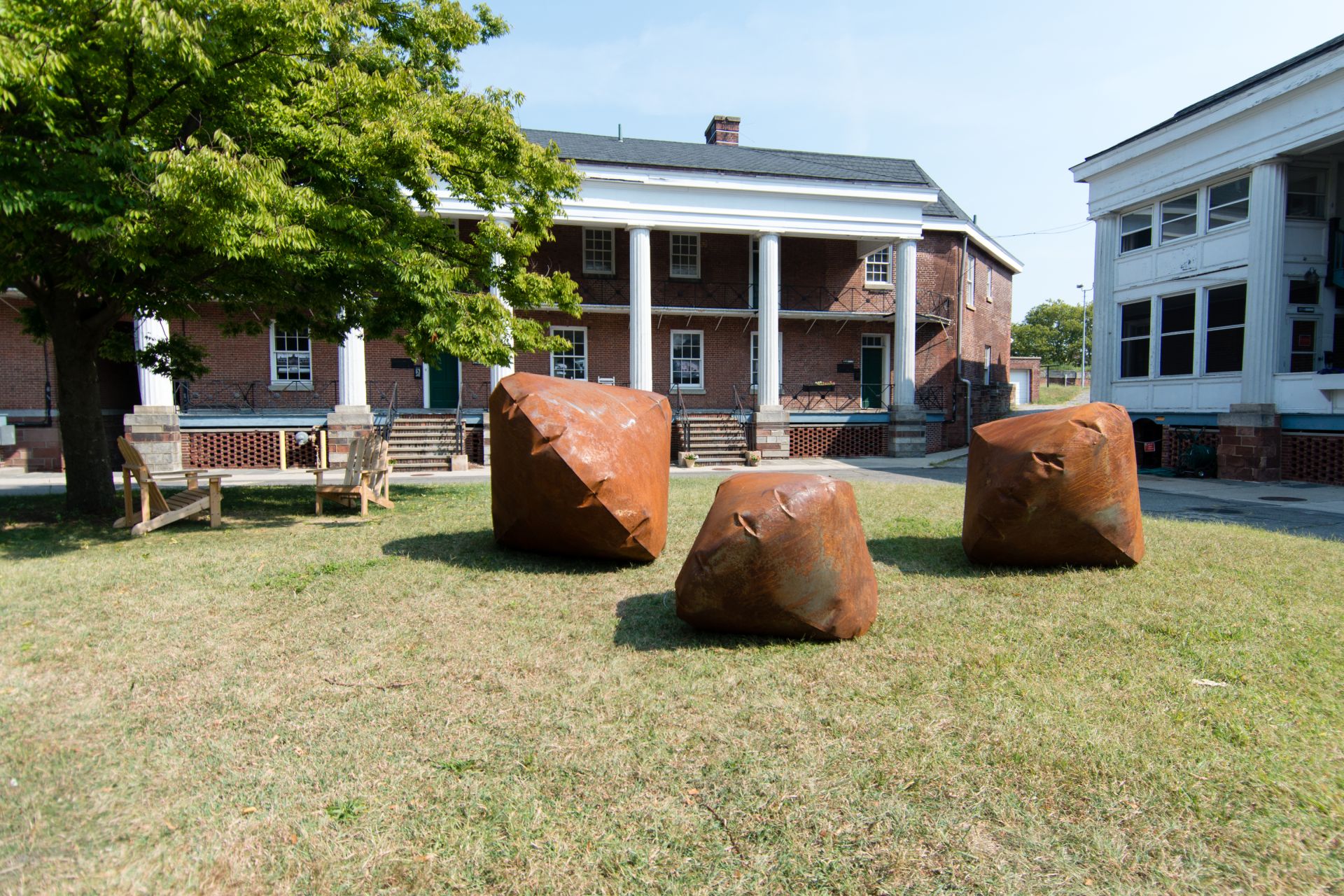 Other notable outdoor works are the bulbous steel pieces in the Fort Jay courtyard by artist Rodrigo Nava, their forms created by setting off live explosives inside the forms.
almartinez1224 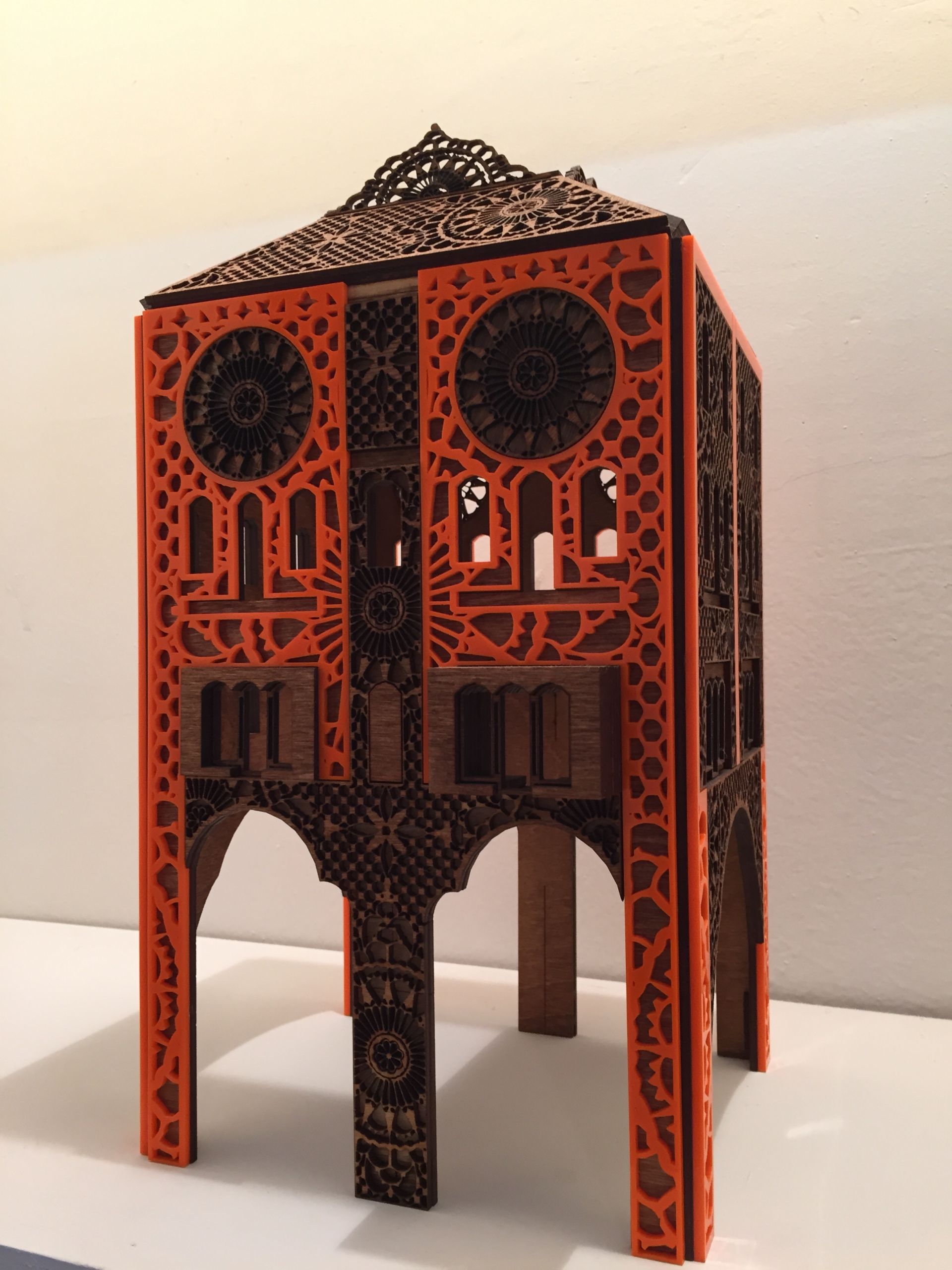 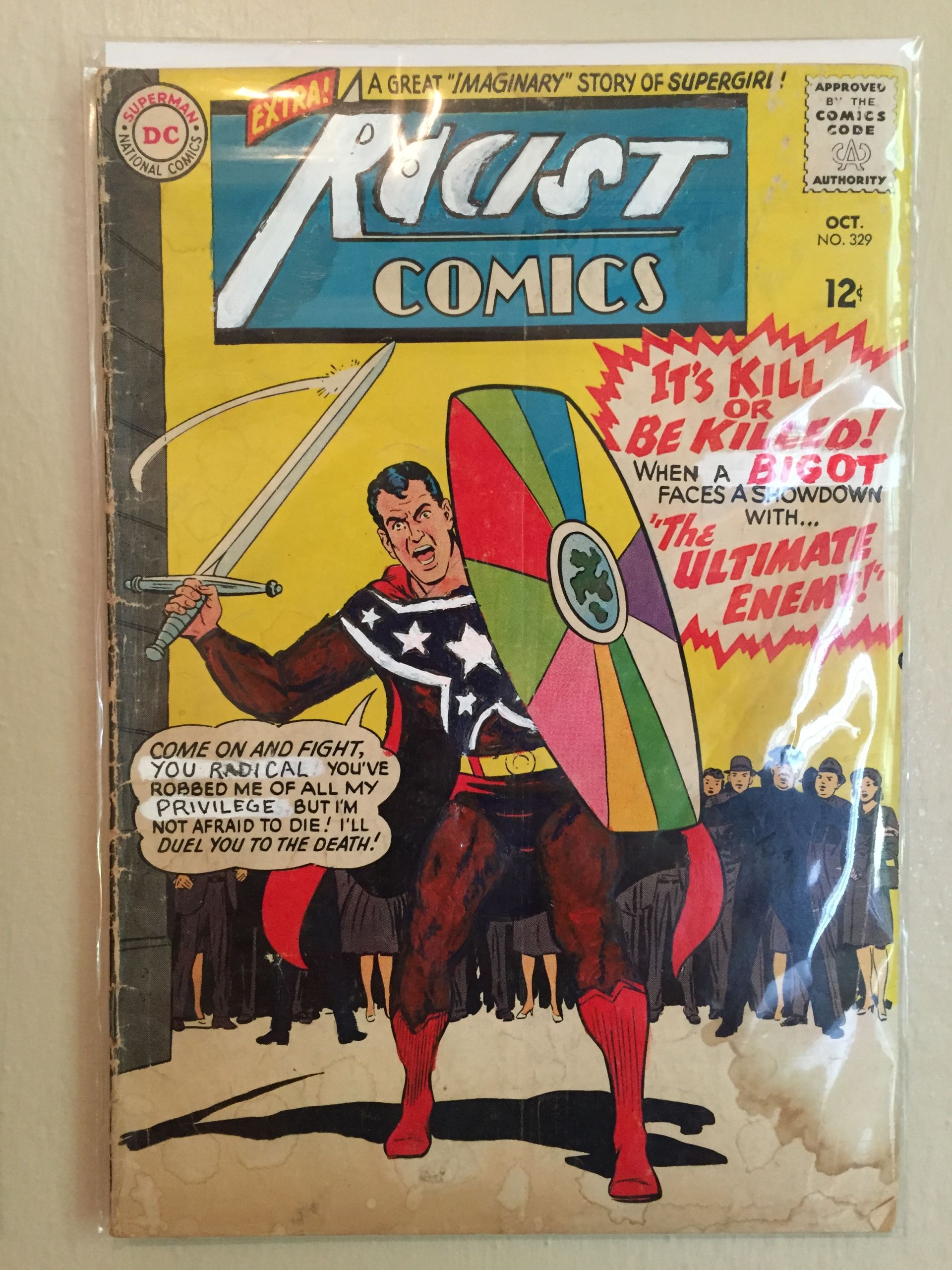 Kumasi J. Barnett has covered the walls of an entry foyer with a series of artistic interventions on the covers of comic books, themed around issues of racial politics and American identity as portrayed by superheroes. Issues of The Amazing Spider-Man and Daredevil have been altered to read The Amazing Black-Man and Blackdevil.
Kumasi J. Barnett, 'Racist Comics', (2015). (Photo: Alanna Martinez)
almartinez1224 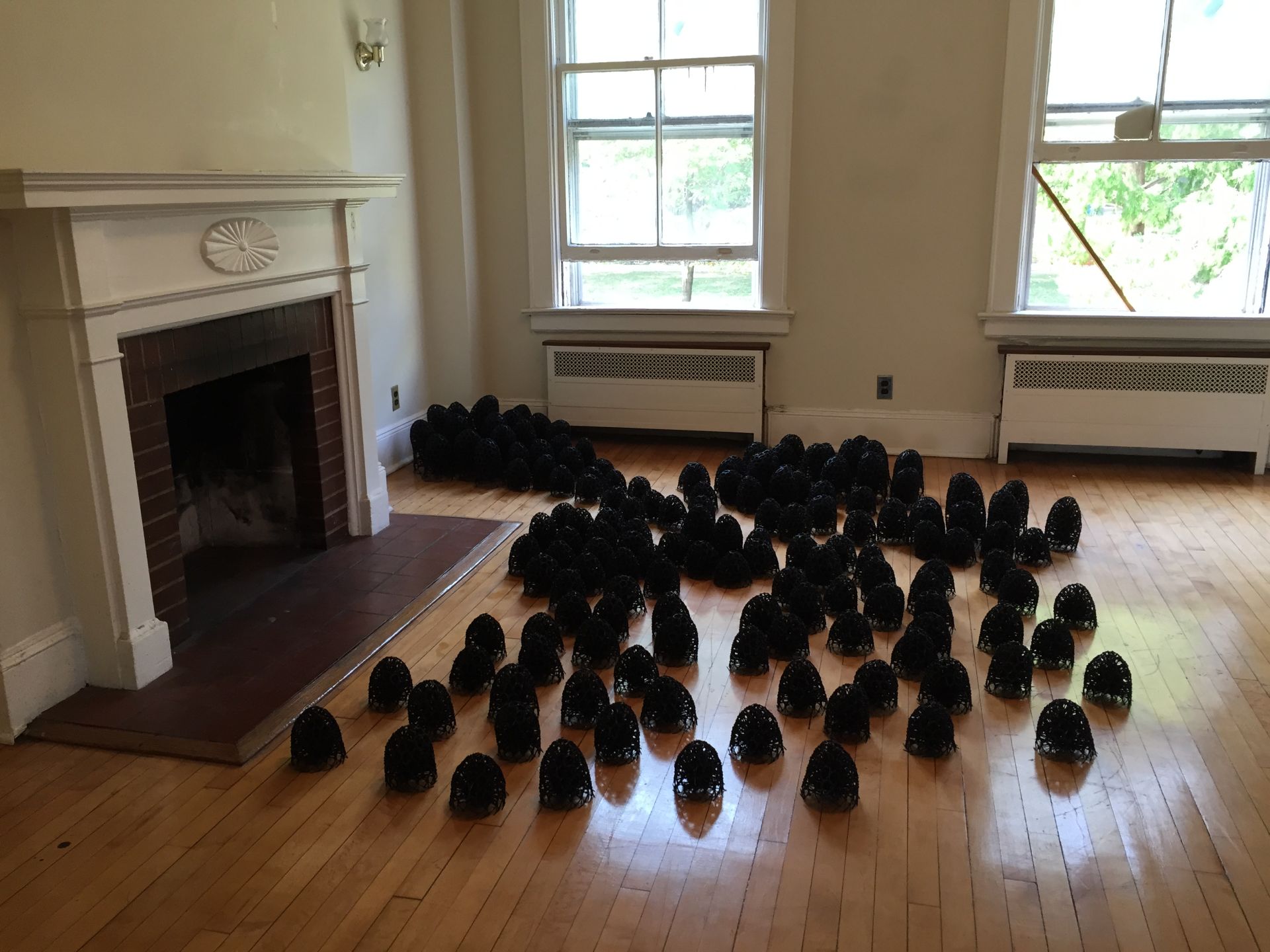 But the light and sound works tucked away in the cavernous storerooms of Fort Jay are not to be missed either, though visitors will need to trek up a significant hill, and through the Fort's stately courtyard in order to get to them.
Sui Park, 'Presence,' (2015). (Photo: Alanna Martinez)
almartinez1224 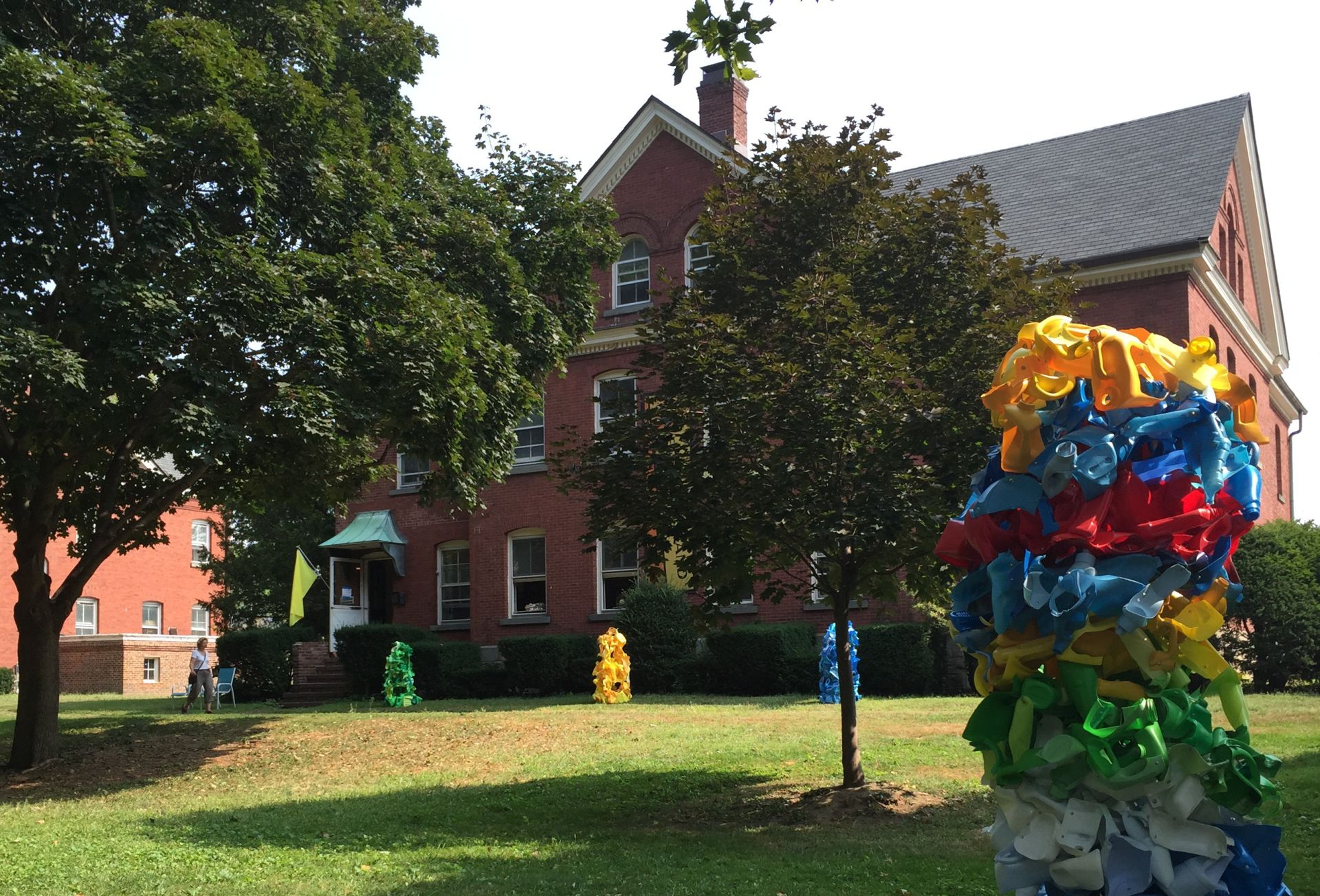 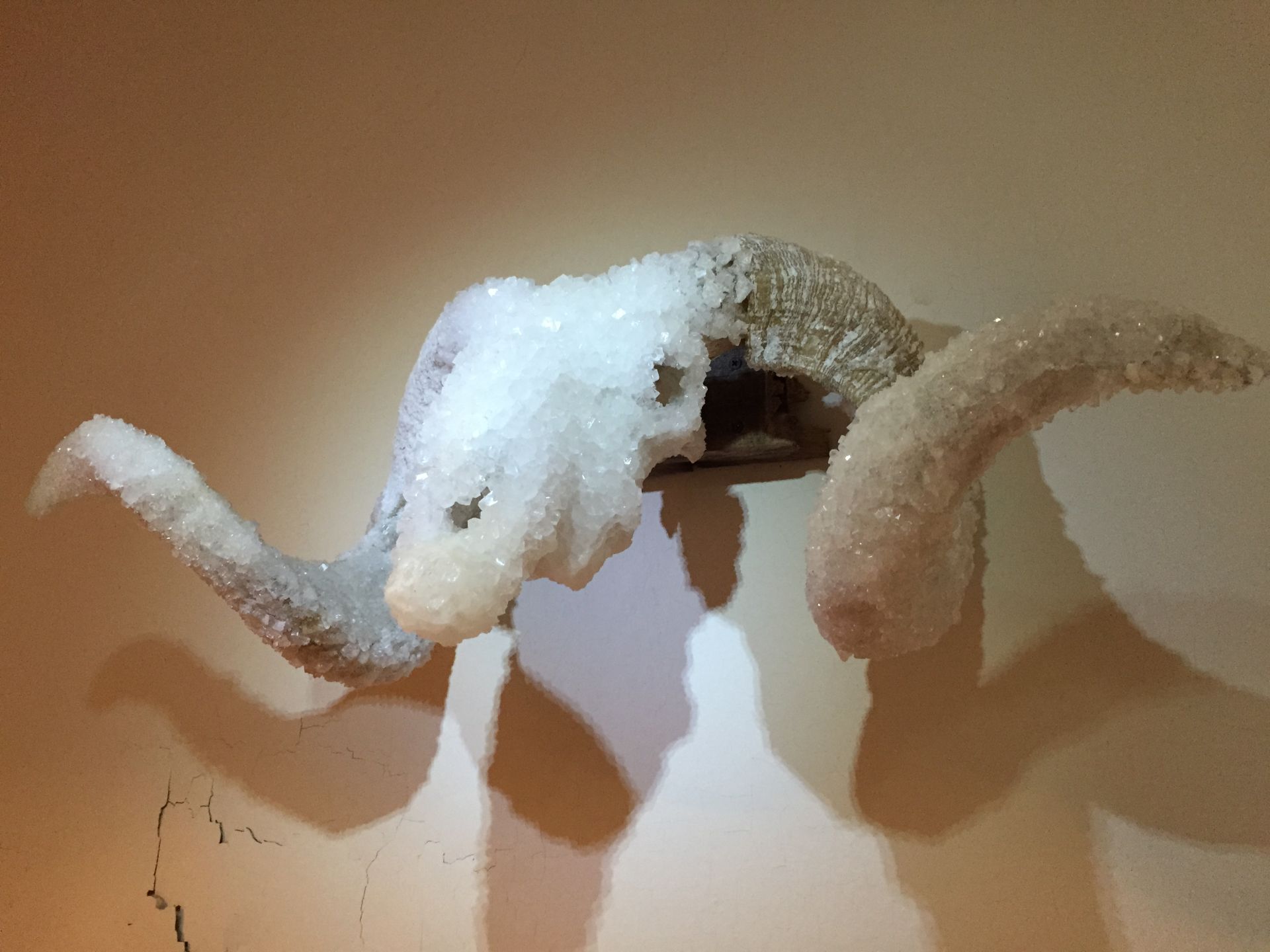 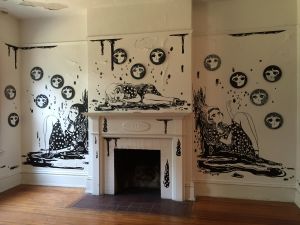 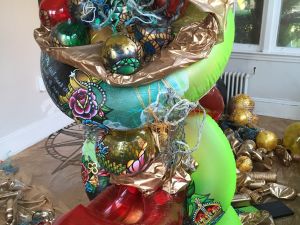 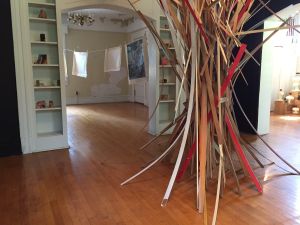 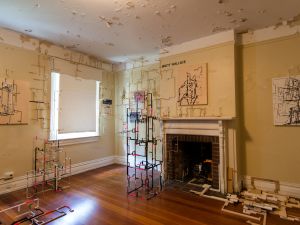 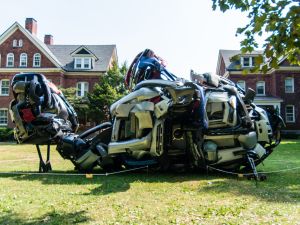 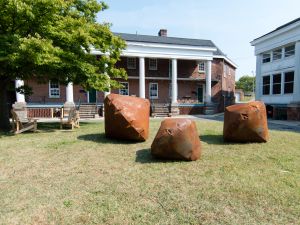 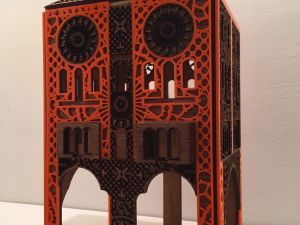 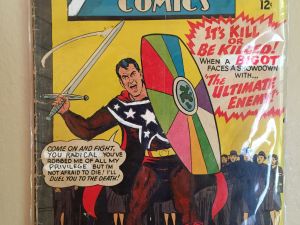 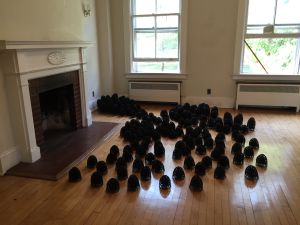 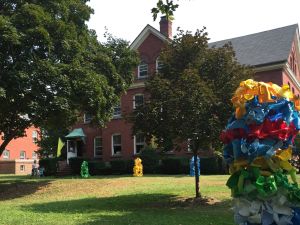 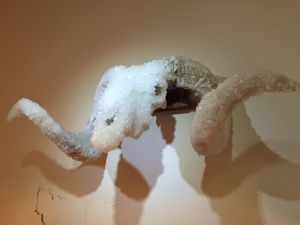 New Yorkers looking to lap up the last warm days of summer in one of the city’s more historic green spaces, but who also want to dive head first into the art world’s first offerings of the season, will find a perfect marriage of both a short ferry ride from Lower Manhattan on Governors Island.

Now in its eighth year, the Governors Island Art Fair occupies the former homes of Colonels Row, a grouping of regal brick houses that were occupied by high-ranking officers up until 1992. The houses are no longer private residences, and the island is no longer a military base, but the ghosts of the past will mingle with contemporary art around every crumbling corner beginning September 5 and running every weekend through the end of the month. A ferry ride to Governors Island costs $2, but admission to the fair is free.

Founded by the artist-run nonprofit 4heads, the fair features over 100 artists whose work occupies nearly 100 rooms between four of the Colonels Row houses. There are also a series of large-scale outdoor sculptures and installations peppered across the sweeping lawns in front of the houses, and, for the first time, the fair has placed sound and video works in the tomb-like stone magazine underneath Fort Jay, which once housed explosives and ammunition when it was used by the U.S. Army.

While the fair is no longer a newcomer, and it boasts numerous seasoned artists, it’s refreshing for its use of unorthodox exhibition space, from which many installations that couldn’t possibly exist in a white box gallery are born. And given the many restrictions of showing within a National Park, participating artists are given impressive freedom.