Musicians don’t own 10 or 20 different guitars just because they want to rock out with different looking instruments from time to time. Different types of electric guitars produce drastically different sounds. Some are good for jazz, others for heavy metal—it all depends on the pickups, the metal pieces that rests underneath the strings at the base and translate a string’s vibration into an electrical signal that you can pump through an amplifier.

A new invention, however, is giving guitarists the option to play in many different ways with only one guitar. New Yorker Andrew Strassell used 3D printing to invent a system of interchangeable pickups that pop in and out with ease in seconds.

SEE ALSO: One Class at NYC’s New DJ School Will Teach You to Make Your Own Remixes

Typically, pickups are fixed permanently into guitars. Some brave souls will deconstruct their guitars to customize them and change the pickup in the process, but this is extremely time consuming and even risky. “What you’d have to do to get it out would be, take off the strings, get out a soldering iron, rip the whole thing apart,” Mr. Strassell told the Observer when he gave us a demo.

In the end, your guitar might sound terrible and you might have completely ruined your instrument. But even if you do successfully change the pickup, you may have a different sound, but still you can still only play one way.

Mr. Strassell’s interchangeable system and the customized guitars he’s building with it are an easy way to keep changing pickups and keep achieving new sounds. It’s so instantaneous, in fact, that the pickups can even be changed onstage during a live show. Josh Shabtai owns one of Mr. Strassell’s customized Flying V guitars and he told us how important this is to deliver the funky sounds set apart his Brooklyn-based, dance rock band Controller.

But not only does it enhance musical creativity, it’s also very convenient. Artists usually have to lug along several guitars to shows and recording sessions because different songs require different guitars, but this could lighten the roadies’ loads by quite a bit.

Mr. Strassell, who is currently building these guitars on the roof of his Upper East Side apartment in Manhattan, has always loved building guitars and has been tinkering with them since age 13. One day, he realized a better way.

“The thought came to me, ‘What if you just changed the pickups from the back of the guitar and how would you do that?’ and I kind of ideated around that,” he said.

His unique pickups have been three years in the making now. At first, he was molding them out of wood and plastic, but it just wasn’t working. Eventually, he turned to 3D printing which enabled him to “get really, really specific” with his designs and make pickups of professional quality.

“I think the flexibility I have with 3D printing is what I need for my business because it allows me to change out pieces and parts without having to go to a giant prototyping company,” he said. “I mean, I’ve looked into prototyping and it costs thousands, and who knows if it’s even going to work the way you want it to? And then you have to go back to the drawing board.“

Right now, Mr. Strassell is building the pickups into custom guitars for fellow musicians and also running a $50,000 Indiegogo campaign to accelerate his business. Soon, he’ll be selling sets of pickups on sites like Etsy so others can customize their guitars too. 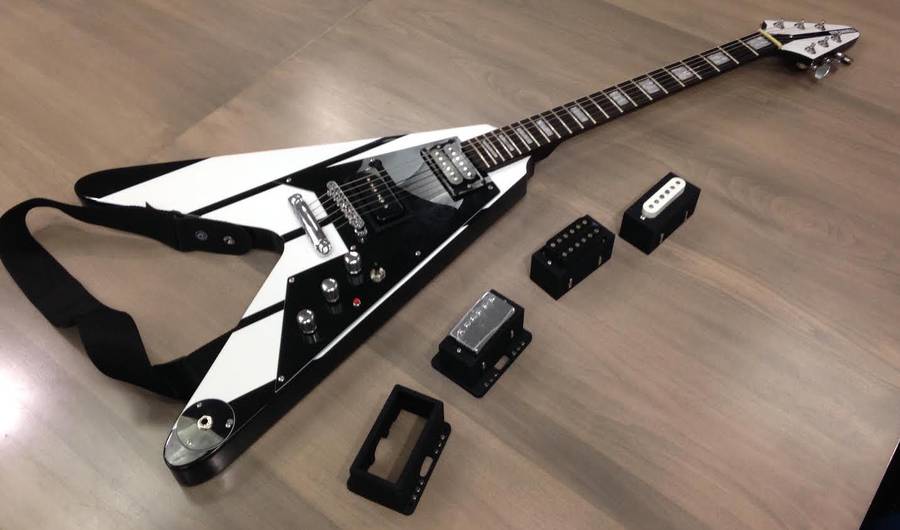