As much as I subscribe to the concept of female solidarity, I share the trait of many of my gender in possessing a certain unavoidable tendency to compare myself with my fellow women. A few years back, around the time the signs of aging started showing up with ever-more-disturbing frequency, I developed the habit of checking up on the faces of other women who were born around the same time I was, meaning 1953. Kim Basinger is exactly one month and three days younger than I am. Mary Steenburgen is actually a few months older. Others born within a few months or weeks of me include Cyndi Lauper, Kathie Lee Gifford, Renee Russo, Chaka Khan and Oprah, but the most daunting of my contemporaries, from the standpoint of achieving seemingly ageless beauty at least, is definitely Christie Brinkley. Perhaps Christie’s pies, or her novels, if she writes them, might fall short of my standard, but unless something really dramatic takes place with her skin and neck over the course of the next ninety days, she’s definitely got me beat in the Youthful-Looking 61-Year-Old category.

Now, it was never my face or my figure I counted on to pay the bills, so why should it matter so much now to see all these new lines showing up? I want to rise above all of this. But sometimes I have caught sight of myself reflected in store window, and I actually shake my head. How can that person be me? I always viewed my face as an expression of me—and if it wasn’t beautiful, it conveyed a certain…energy. But lately, my face has been looking tired. The person I look like these days is my mother, and as much as I loved her, I didn’t want to become her.

I’ve always been an upbeat person. But certain things seem to be going down here. My knees, and a few other body parts, for instance. And though I wish I could say that my mind remains focused exclusively on the important issues of the day, I would be lying if I told you it doesn’t bum me out to observe, in my own mirror, the seemingly inevitable downfall of my own face.

I’ve always been an upbeat person. But certain things seem to be going down here. My knees, and a few other body parts, for instance. And though I wish I could say that my mind remains focused exclusively on the important issues of the day—I would be lying if I told you it doesn’t bum me out to observe, in my own mirror, the seemingly inevitable downfall of my own face.

This is how it came to be that I found myself sitting at my laptop a couple of months back taking in the infomercial of The Beverly Hills MD, a handsome guy by the name of Dr. John Layke, as he described the wonders of his revolutionary new skin care regime, with its money-back guarantee of restoring my skin to a more youthful, dewy and lifted appearance.

The ad showed up mysteriously. (Somewhere on the Cloud, perhaps, I had been identified as approaching the age when a person can start collecting her social security.) I clicked on it at random, and might have expected myself to exit within a matter of seconds, but a strange thing happened then. I kept watching. And now I am meditating on how it was that The Beverly Hills Doctor roped me in as he did, and held my attention for the duration of his half-hour- long infomercial, and that when it was over, I took out my charge card and ordered not one but three jars of Beverly Hills skin cream.

I’m not generally a sucker. When I listen to the words of candidates running for office (about a dozen of whom come to mind, at the moment) or listen to ads on the radio for great deals on cars, vacations, or tooth whiteners, I can generally spot a line, or a lie. I may have made some poor choices over the years, but I never took a drink from Bill Cosby.

And yet. I stayed glued to the infomercial. Maybe it’s the combination of being a woman, age 61, and recognizing all the other problems in life that cannot be addressed with any skin cream, no matter how wonderful, that kept me hanging on to Dr. Layke’s words. In a landscape where much remains beyond my control, here was one small thing I might actually be able to make better.

I won’t try to convey here all the information about aging skin that Dr. Layke explained to me in his infomercial, or why he believes his cream is so superior to the 37 other bottles of cream currently sitting (unused) in my medicine cabinet. Some of the terms I picked up include “visco-elasticity” and “silk peptides”, “lift-essence” and “sculpt-essence”. There was some talk about stem cells, and collagen , and filling in the gaps in my internal matrix. I have no idea what that means, by the way. But it got to me.

Mind you, I’m a word person. I should be the first to spot the ease with which the skillful manipulation of language can manipulate the emotions, and from there make the short hop to persuading a person to part with her money.

In case all of this makes Dr. Layke—or more importantly, me—sound like a superficial person, I should mention that his infomercial started out with quotes from Katharine Graham, Ralph Waldo Emerson, and none other than Betty Friedan. There was some interesting math included, that offered food for thought. (Turns out, wrinkles only account for 18 percent of the surface area of a person’s face, while the neck and décolleté area—so long neglected—count for a whopping 54 percent.)

I kept waiting to find out how much this cream was going to cost me, and as tends to be the case with this type of ad, I had to watch all the way to the end to find out, though not before Dr. Layke reminded me that Lift-essence and Sculpt-essence and Silk Peptides do not come cheap. Then again, how much time and money had I wasted over the years on all those inferior products languishing in my bathroom? Enough for a ticket to Bali, I’m guessing. Enough for a face lift.

By the time I got to the end of the ad, I knew he had me. When he told me about the three-jar deal ($120 total) , I didn’t bat a (droopy) eye. (And about those eyes: it wasn’t just that the lines around them made me look older. Dr. Layke explained that they also probably contributed to an overall appearance of me as an unhappy and unfriendly person. Was this the image I wanted to convey to the world?

I couldn’t wait to begin my regimen. With three jars—and a money-back-guarantee—I felt able to use my Beverly Hills cream liberally, slathering the stuff on twice a day, and not only on my unhappy-looking face and all-important décolleté regions, but even on my knees as the doctor suggested. (He had even, tantalizingly, referred to one of his many celebrity clients—“a well known anchorwoman” whose identity he could not divulge for reasons of patient confidentiality—who had applied the stuff on her upper arms, with staggering results. I wanted to think this might be Megyn Kelly, whose upper arms do indeed look very good, not that I’m sucker enough to watch Fox News.)

Ok, I’ve kept you in suspense long enough. I will now report how things are going, after sixty full days of religiously applying my Beverly Hills Dr. Skin cream.

I look exactly the same (though possibly two months older.) There are older-looking 61-year-olds, for sure, but if you stood me next to Christie Brinkley, you might convince someone I was Christie Brinkley’s mother. Or Mary Steenburgen’s aunt.

As it is, I am heading into Katharine Graham and Ralph Waldo Emerson territory. Minus the wisdom part, evidently.

Tomorrow, I will ship back to Beverly Hills the unused portion of my three jars of Beverly Hills cream, in the hope that Dr. Layke makes good on the money-back-guarantee I was promised, if I were only 95 percent (as opposed to 100 percent) satisfied with this product. Though perhaps I got my money’s worth in another way: because I may have finally laid to rest the fantasy that the product exists, anyplace in this galaxy, that can restore my face to its 45-year-old or even 52-year-old glory. I look every day of the nearly 62 years I have spent on this planet, and if I look somewhat younger in my picture, I’m here to tell you, it’s the picture I chose, over the other fifty my husband took that didn’t turn out as good.

I’m swearing off infomercials. But it is noteworthy to add, by way of post script, there remains one product strikingly absent among the various creams, lotions, gels and serums in my collection. One product I would probably do well to add to my collection.

It is called sunscreen. And for some perverse reason that perhaps only Betty Friedan could explain , if she were living—or Keith Richards maybe—I never remember to apply it. 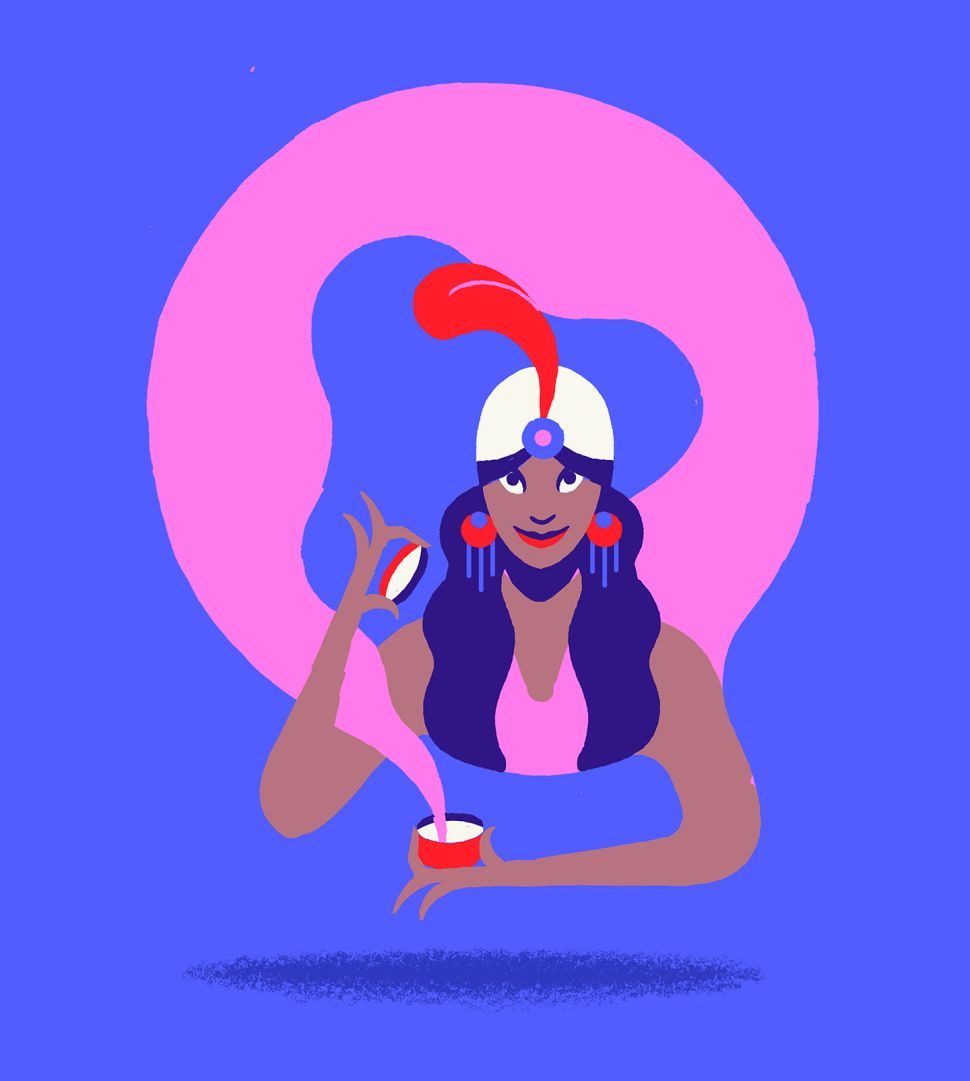