Have you ever gone out to an event and entered a room where you suddenly realized…you don’t know anyone? Not a single person?

Just about everyone has experienced that unique terror. It’s not much fun.

Whether you’re at a work event, a social gathering, a holiday party, or even the first day of college, these situations can be incredibly stressful if you’re not naturally outgoing.

And it’s a common problem for many people. You’ve probably been to an event where you showed up and you didn’t know anyone. You’re left wondering: do you whip out your phone and start checking email messages so you don’t have to talk to anyone? Do you dig your hands in your pockets and slouch your way into a corner?

(Hint: neither is right.)

In this post, I want to talk about what happens when you enter a new room and you don’t know anyone.

After you’ve entered the room, how do you blend in seamlessly, with charm and wit and class like you belong, even if you are feeling internally like you aren’t so sure.

In other words, so you look more like George Clooney at an Oscars after party than Zach Galifianakis at…just about any party.

Here are six sure-fire ways to start making friends when you don’t know anyone, even if you may feel like you’re wilting inside:

1. Set A Goal For Yourself Before Even Showing Up

One of the most powerful things you can do to make friends in a room where you don’t know anyone is to set a goal for yourself before you even show up to an event. Goals are incredibly powerful, whether you are setting them for your life, for your career, or for your social life.

Mark H. McCormack, author of What They Don’t Teach You in Harvard Business School, wrote that only 3% of the 1989 graduating class of Harvard Business School had set distinct goals for themselves when they entered college, yet by the time they left Harvard those who had set goals for themselves were earning ten times as much as the rest of the class. Talk about power in setting goals.

You can do the same thing for setting goals when you’re going to be in a room full of people you don’t know.  Set whatever goal makes you feel comfortable. You could set a goal of talking to at least one new person per hour, or introducing yourself to 5 people before you leave for the evening, or even deciding you will only leave once the clock hits a certain time. By setting goals, you are more likely to compel yourself to start meeting people.

2. Bring The Host A Gift

Another powerful way to make friends is by bringing a gift to the host. This seems like a very small gesture, but it shows you have excellent manners and social acuity. Other guests will take note or your gesture and are likely to conclude that you are someone who is worth meeting.

Additionally, the host or hostess may go the extra step of introducing you to other guests they think you’d get along with. Bringing thoughtful, appropriate gifts is basically a win-win for everyone involved.

3. Offer To Get Someone A Drink Refill

If you notice someone’s drink is low and they’re caught up in something else (like a conversation or a game of pool, for example), you could politely ask if you can refill their glass. Doing so will immediately make you more likable, and it may even be an opening to strike up a conversation with someone you haven’t met yet.

Just note that you should always make sure you get them the drink they actually want. If someone asks for a Shirley Temple and they don’t have Shirley Temples so you come back with a glass of wine, you could put them in the uncomfortable position of declining the drink you brought them because they don’t drink.

Avoid any potential awkwardness by clarifying at the outset exactly what drink they want and perhaps a backup drink in case they don’t have their chosen drink.

One great way to break the ice with others who you haven’t met or don’t know well is by engaging in a group activity. I recently attended a small conference for entrepreneurs in Napa Valley called Mastermind Talks, and one of the highlights of the event was a group cooking activity. Guests were divided up into small groups and we all made our own dinners together at small cooking schools which were spread out amongst the wine region.

The reason these types of activities work well is they allow people to get to know one another better through a shared activity.  I ended up making paella with a fellow entrepreneur from Washington D.C. who, it turned out, had attended the same small summer day camp in Los Angeles as I had around the same time — over 25 years ago. We ended up bursting into song, singing the camp’s catchy theme song in unison. (There may have been some wine involved.)

I don’t know if we would have discovered that shared commonality if we had simply had a more traditional conversation at a social gathering.

Your group activity doesn’t have to be complex. Simply grab whatever is available – it could be a board game, playing cards, a video games, a pool cue, or whatever. You could even teach a group of people a skill that doesn’t require any equipment, like how to balance on a surfboard or how to line dance. Have some fun with it. Of course, some situations may not be appropriate for gaming activities. You may want to verify with the host or hostess that it’s okay first.

5. Realize Your Don’t Have To Impress Everyone

Unless the event is focused around you, there’s no reason to assume you need to impress everyone in attendance. It’s OK to make just a few friends — you don’t have to meet and get to know every single person in the room.

For those who are shy, this should alleviate the pressure of starting a conversation with a stranger. It will also ensure you focus less on your insecurities and have a better time.  Simply be satisfied with meeting a few people and focus on deepening those relationships.

6. Keep The Focus On The Other Person

This tip is probably the most important, and is closely related to the previous one. You should always leave your ego at the door and focus on making another person feel special and interesting. Come prepared with some starter questions which aren’t the same-old “what do you do?” (try asking less job-related questions, which tend to be the kinds of topics people love talking about, like “so do you have any fun plans this weekend?”).

Ironically, if you let someone else talk about themselves, you look really cool in their eyes because you’re listening to them. Here’s another compelling reason to actively listen to others: Louisiana State communication experts Christopher Gearhart and Graham Bodie studied 300 undergraduate students and discovered those who said they were less likely to be empathic listeners were also more likely to be considered rude because of a lack of social skills. Coincidence? Maybe, but still a compelling reason to be a better listener.

Making friends with new people in a new room doesn’t have to be daunting — in fact, it could even be fun. The key is to come prepared, realize you are not the center of attention (everyone else is), and have fun with it.

Who knows – you may even catch yourself breaking out into song with someone you just met. If that happens, just roll with it and try to sing on key. You’re doing something right.

John Corcoran is a former Clinton White House Writer and creator of Smart Business Revolution, where he shares advice and strategies on how to grow your income by building better relationships in business. Grab a copy of his free report 25 Easy Conversation Starters in Business. 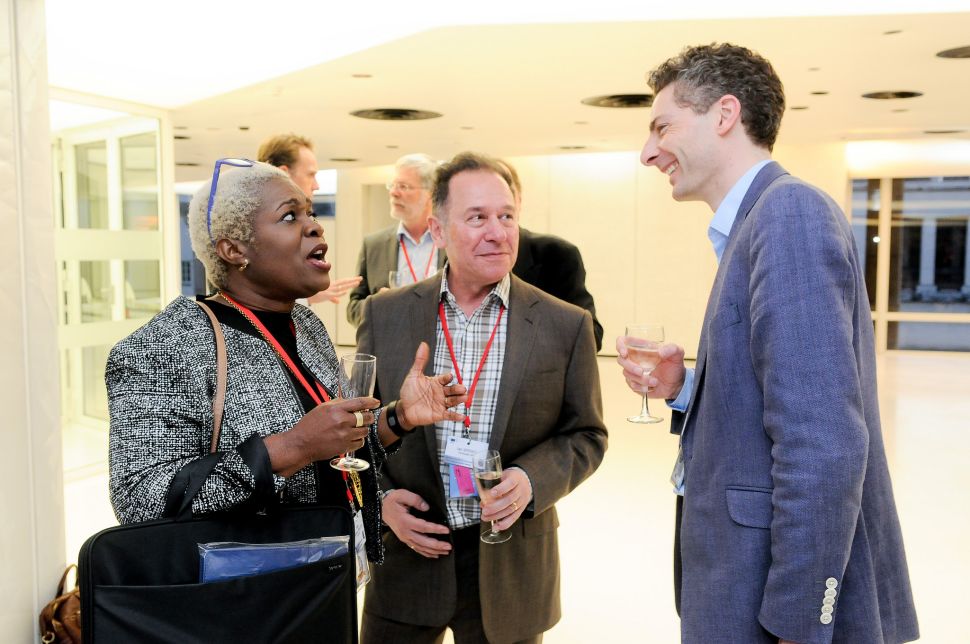