JERSEY CITY – Many of Hudson County’s elected officials gathered in front of Christ Hospital in Jersey City today to raise concerns about a plan recently proposed by Horizon Blue Cross Blue Shield to move to a tiered hospital insurance system.

Thirty-four hospitals throughout the state were selected to join the OMNIA Alliance program as “tier one” hospitals. Twenty-two other hospitals have been ranked as “tier two.” Tier one hospitals would have lower costs and premiums for anyone with Horizon insurance. Officials are concerned that tier two hospitals would suffer from less people electing to get services there due to higher associated costs and instead choose to travel to tier one locations, even if they are further away.

“I don’t know how this is considered justice,” Prieto said. “Something needs to be done. We cannot let Horizon dictate to the people of New Jersey where they can get treatment.”

“Everyone should have fair, low cost insurance,” she said. “It shouldn’t be given to one or the other.”

While the plan has been announced, Horizon has not released the details. Prieto said that no legislative action will be taken at this time but that hearings are being planned in both the Senate and the Assembly to ensure that no harmful ramifications are discovered after implementation.

The Senate hearing is scheduled for October 5. There are no details on when the Assembly will be holding their hearing but Prieto said it will most likely be in early November after more details have been released.

“It is like a freight train heading towards you with no lights and you have ear plugs in,” Prieto said.

Horizon issued a statement in response.

“Horizon is responding to our customer demands for more affordable health plan options,” said Thomas Rubino, director of public affairs. “We are providing consumers, including Hudson County residents, with additional lower cost choices, We are not taking options away. Horizon will offer the same broad network health plans as they do today next year. Consumers can choose to renew these plans and continue to have access to the same Hudson County network hospitals they do today‎.

“Horizon will offer a new suite of lower-premium health plans next year. These plans will also allow consumers to save additional out of pocket costs by using certain Tier 1 doctors and hospitals,” Rubino added. The current Hudson County hospitals in Horizon’s managed care network – Jersey City Medical Center, Bayonne Medical Center and Hoboken University Medical Center — will remain in network with the new products. Additionally, 55 percent of Horizon’s network physicians in Hudson County will be in “Tier 1” in the new plans, and more than 24,000 across the state. Horizon looks forward to addressing the questions and misconceptions about its new plans when we participate in legislative hearings on October 5.” 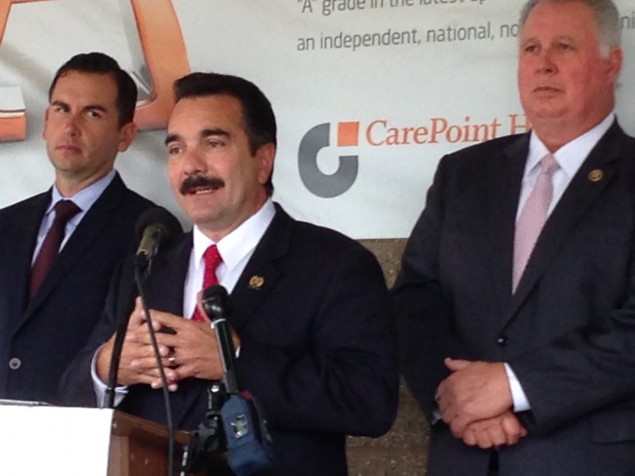