Gong Li is a great actress, but she’s awkward in English, which is not her first language, and in a mess called Shanghai her English makes no sense. But of course, nothing else in this turgid, incomprehensible disgrace makes any sense, either. At least Gong is ravishing, which occasionally takes your mind off the gibberish that is going full tilt around her.

1941. The world is at war and John Cusack plays an American spy masquerading as a newspaperman in the only city in China that hasn’t been conquered by the Japanese. Naval intelligence has sent him to this melting pot of international intrigue to find a friend named Connor. But Connor has been murdered by the time he arrives and everyone in Shanghai is a suspect. Connor was investigating a gang lord, so Mr. Cusack starts spying on everyone.

The Japanese are fighting the Chinese. The Chinese are fighting the British. The Americans are caught somewhere in the middle. Mr. Cusack’s job at something called—are you ready?—the Shanghai Herald gives him access to them all, but doesn’t save him from an interminable series of gunshots, stabbings, explosions and other wounds that leave him with nothing more than a small Band-Aid. Nazis, Japanese imperialists, British diplomats and Chinese war lords all compete to see who can speak the most lunatic dialogue without laughing.

No one is safe here. Everyone has a gun and doesn’t hesitate to use it. A simple night out is a risk to your life. Restaurant customers die violent deaths in cold blood before the dessert is served. The killers are all bad guys, and the only way to tell them apart is by what they’re wearing. The Japanese bad guys wear brown Red Army uniforms. The Chinese bad guys wear business suits. The German bad guys wear swastikas. It’s not clear what any of them are up to, but doing it in opium dens, casinos and German Embassy dinners to big band jazz music is appealingly photogenic, so the intrigues are never dull.

Wandering in and out of the confusion is Gong Li, making her bid for English-speaking action-movie stardom. People keep telling her “You must leave Shanghai.” One character says, emphatically, “Get the hell out of Shanghai!” Not a bad idea under the circumstances.

Some of the other talented but wasted people who should follow her through the doors marked “Exit” are Ken Watanabe, Chow Yun-Fat, Rinko Kikuchi and David Morse. They are all directed with supreme incompetence by somebody named Mikael Hafstrom. The incoherent script that fails to identify one spy from another is by a writer so scatterbrained that I consider failure to mention his name an act of charity. Finally, I ask: how many times does John Cusack have to prove he is no leading man? In Shanghai he comes off as Sam Spade with chopsticks. 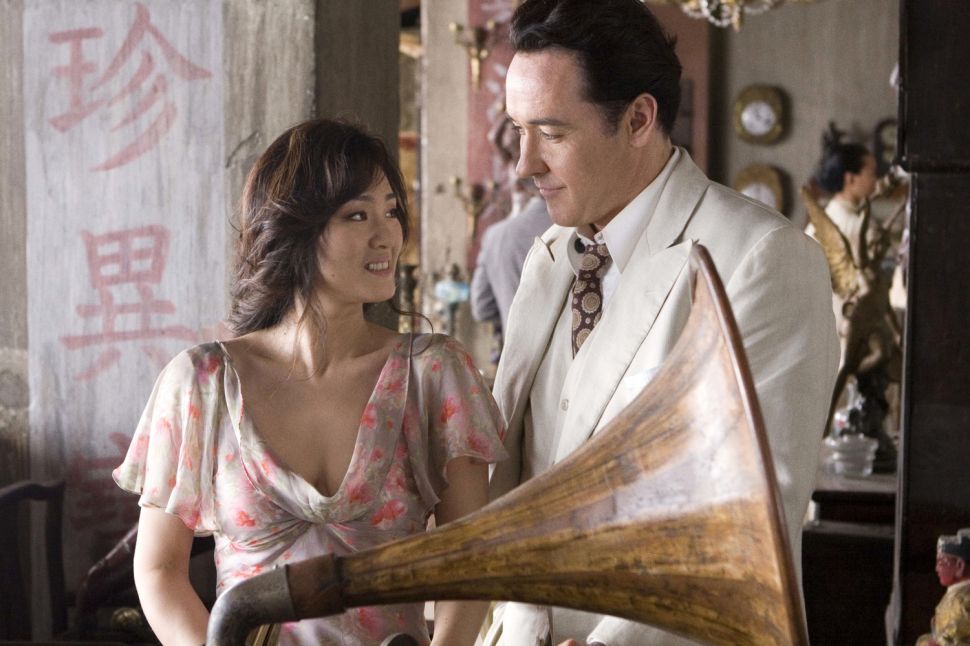