A few dozen protesters affiliated with the group Picture the Homeless gathered under the elevated Metro North tracks at 125th Street and Park Avenue in East Harlem to protest what they claim is a new policy of police harassment initiated under Mayor Bill de Blasio.

Chanting “hands off the homeless” in the frequent gathering spot for indigent individuals, the demonstrators alleged Mr. de Blasio has allowed and even encouraged the NYPD to badger and intimidate people living on the street. Several said the treatment has gotten worse in recent weeks, after Mr. de Blasio has vowed to clear the 80 encampments around the city—a pledge the demonstrators said was a betrayal of the progressive principles he campaigned on in 2013.

“We are having a difficult time right now where police keep moving and criminalizing homeless people because they are homeless citizens right now. It’s not a crime to be a homeless citizen,” said Marcus Moore, a former homeless man. “Mayor de Blasio has defaulted on his plans for, when he decided to run.”

“He all of the sudden has forgotten what he ran for,” Mr. Moore added.

The protest, which picked up and wove through the neighborhood, also featured a skit depicting what the advocates claimed is a common scene: a team of police officers descending on a group of drowsing homeless people, hassling them to get up with threats of arrest and destruction of their property and then hustling them down the block.

The main thrust of the mayor’s approach to homelessness has been to increase funding for mental health services and to promote his ambitious affordable housing agenda. But several demonstrators today argued that many people living on the streets suffer more from poverty than mental problems, and that the apartments created under the de Blasio plan often have rents that are still out of reach for the lowest income New Yorkers.

The protesters the Observer spoke to proposed remedies ranging from the end of NYPD Commissioner Bill Bratton’s “broken windows” strategy of cracking down on small quality of life violations to the complete abolition of the police force to the public seizure and conversion of derelict properties to housing for the homeless.

“Street homeless folks have been neglected for years. Inadequate services. Rents going higher and higher, we are being priced out of our own neighborhoods,” said activist Nikita Price, standing in front of a large grassy plot of land near the train trestle. “This population needs real and permanent housing solutions. This is an empty lot being overgrown. If you walk through every borough of New York City, you will see abandoned property.”

The mayor’s office claimed that there was a single eviction of residents from the encampment to allow for cleaning of the area, for which it claimed the homeless residents were informed a week in advance. It also maintained, a recent synthetic marijuana drug bust in the area notwithstanding, that the main thrust of the city’s efforts has been social service outreach.

“The de Blasio administration is focused on a constructive, long-term approach to reducing homelessness in New York City, and our teams are engaged in consistent and ongoing outreach to compassionately engage New Yorkers on our streets and bring them to services and shelter,” a spokesperson told the Observer, adding that the mayor was working with Council Speaker Melissa Mark-Viverito—who represents the area—to develop a strategy for the block and its homeless population.

The mayor has also touted increased spending on supportive services in the shelter system. But the homeless people at today’s protest that the Observer spoke to said that city’s social workers are unhelpful and the shelters horrific.

“The shelter is like a jail,” said Christopher Parker, who said he has been homeless for several years and unsuccessfully sought information about housing and job opportunities from shelter staff. “They clocking in, and a lot of people you can’t even meet. I’m talking to the supervisor, and I can’t even ask more than three questions before you running me away, ‘I don’t have time to deal with you.'”

Mr. de Blasio’s approach to the swelling street population is now facing attacks from both ends of the political spectrum. Former Mayor Rudolph Giuliani, a Republican who dealt aggressively with homeless New Yorkers during his tenure in the 1990s, demanded last month that his liberal successor “chase them out of the city.”

The mayor has scrambled to revamp his approach to the situation, which until recently he claimed was improving and overblown by the media. Late last month, Deputy Mayor for Health and Human Services Lilliam Barrios-Paoli—who had been charged with the duty of dealing with the problem—abruptly stepped down, though Mr. de Blasio has claimed the resignation had nothing to do with the spiraling crisis. 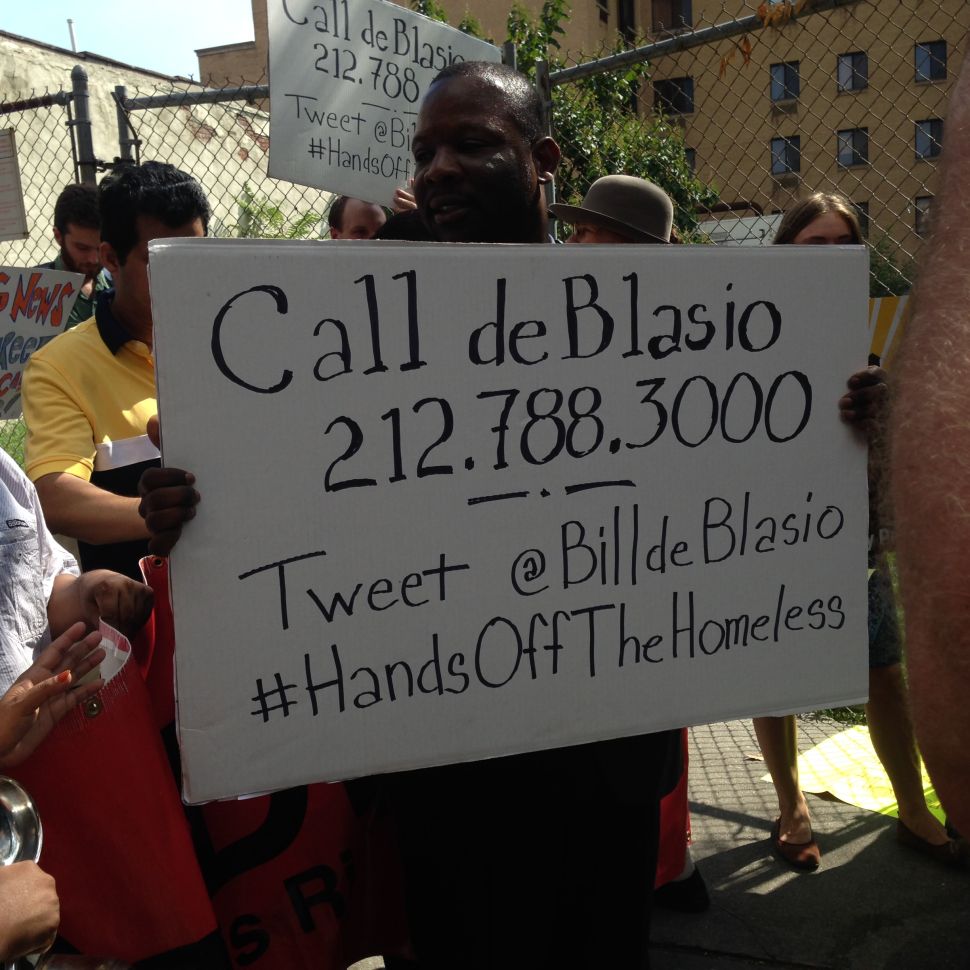