Kanye West showed his second iteration of his Yeezy collection earlier today, billed as “Season 2,” and the musician’s future as a designer is looking bright. The ADIDAS-backed production was just as celebrity-packed as last season, though Mr. West maintained full control over the guest list to avoid the circus that ensued during his previous showing in February.

The 64 looks, which were rumored to have been edited down from nearly 100, were produced in a limited color palette of a dusty beige, grey, and black with subtle variations in cutting that gave vague reminders of early Rag & Bone. Models were arranged by skin tone and came forward in waves in a presentation style devised by performance artist, and longtime collaborator Vanessa Beecroft. The soundtrack was, of course, a new track by Kanye. The rapper-cum-designer has struck a certain formula, and he’s sticking to it.

In the front row sat his wife, Kim Kardashian-West with daughter North, who hilariously snacked on a lollipop and made a beeline exit akin to Anna Wintour’s usual brisk jog when she exits a show. The tot was able to make it through the entire showing this time too, although with some squirming. Last season she was escorted out early thanks to an especially thunderous trumpet player providing the show soundtrack.

Alongside Ms. Kardashian sat Ms. Wintour and Givenchy’s Riccardo Tisci, both of whom brought their respective pals. Ms. Wintour brought along Seth Meyers, who also happens to be her daughter’s boss, while Mr. Tisci was joined by songstress Lorde. 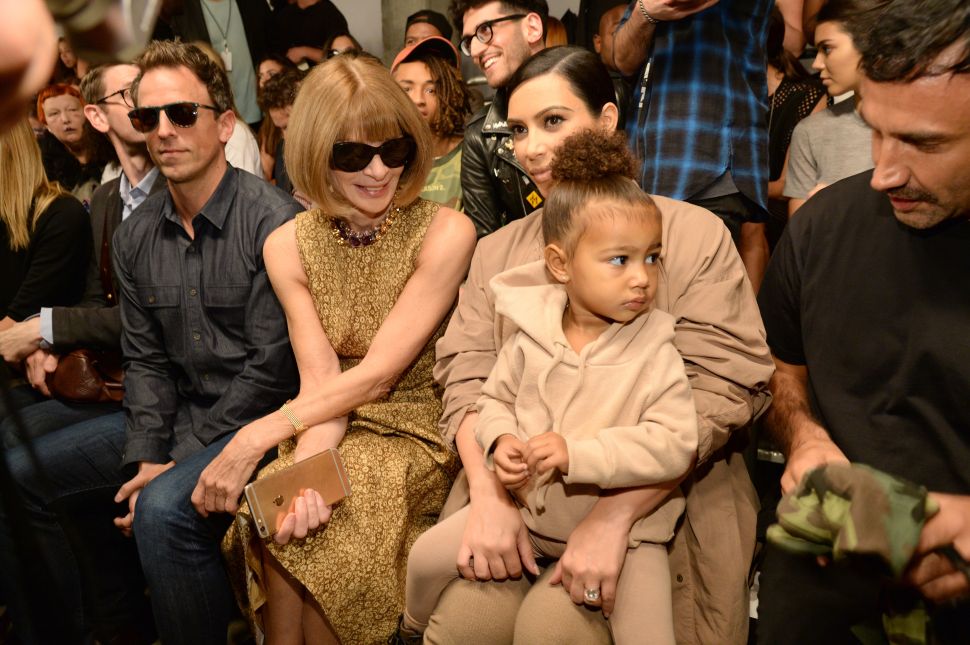