Talk: “Artists at the Institute: Agnieszka Kurant” at The Institute of Fine Arts
As part of their acclaimed series “Artists at the Institute,” IFA hosts a talk by uber cool Polish artist and curator Agnieszka Kurant. She’s got some pretty kooky work currently on view in the exhibition “Storylines” at the Guggenheim Museum, including Phantom Library, a collection of books that were never actually written but have been described in fiction, and The End of Signature, a light projection that magically transforms the handwritten signatures of Gugg visitors.
The Institute of Fine Arts at NYU, 1 East 78 Street, New York, 6:30 p.m., RSVP required

Opening: “Jack Tworkov: Mark and Grid, 1931-1982” at Alexander Gray Associates
Jack Tworkov was a workhorse. “Mark and Grid,” a selection of paintings and works on paper drawn from the artist’s estate, proves this, covering over 50 years of the artist’s signature Abstract Expressionist work. It’s the gallery’s first presentation of Tworkov’s work since they started representing the estate, and it’s bound to be chock full of stylistic shifts—from the loose brushwork of his early paintings to the minimal marks of his latest canvases.
Alexander Gray Associates, 510 West 26 Street, New York, 6-8 p.m.

Talk: “Reading Images: Crow’s Eye View” at Storefront for Art and Architecture
This is the place to hear some serious “scholar talk” from Alessandro Belgiojoso, Nick Bonner, Minsuk Cho and Dongwoo Yim, who are examining work from the upcoming show “Crow’s Eye View: The Korean Peninsula,” which opens on September 10 at Tina Kim Gallery. The show reprises the celebrated Korean Pavilion at the 2014 Venice Biennale of Architecture, which won the Golden Lion for Best National Participation. The group will look at the diverse architecture of postwar Korea, and there should be plenty of Kim Jong-un jokes to help lighten the mood.
Storefront for Art and Architecture, 97 Kenmare Street, New York, 7 p.m.

Screening: “Shigeko Kubota: Daylong Tribute Screening” at EAI
If you like Shigeko Kubota, then this posthumous “Daylong Tribute Screening” of the video pioneer’s works is the place for you to be this Wednesday. The program consists of 12 videos—ranging from 1972’s Marcel Duchamp and John Cage, which documents a chess game between the two smartypants artists, to 2006’s Winter in Miami 2005, a stirring tribute to her husband, the influential artist Nam June Paik, who died in 2006.
Electronic Arts Intermix, 535 West 22 Street, New York, 11 a.m.-8:15 p.m.

Opening: “Isamu Noguchi” at Brooklyn Botanic Garden
One of the most important artists and designers of the 20th century (he’s got his own museum in Queens, people!) Isamu Noguchi is internationally known for his sculptures, gardens, furniture, lighting designs, ceramics, architecture, set designs and much more. In conjunction with Long Island City’s Isamu Noguchi Foundation and Garden Museum, the Brooklyn Botanic Garden will present six brilliant examples of the artist’s sculpture in the Japanese Hill-and-Pond Garden, which is celebrating its 100th anniversary, and more works throughout the BBG. If you’re a member, take advantage of what is sure to be the Zen party of the season.
Brooklyn Botanic Garden, 150 Eastern Parkway, Brooklyn, 6-8 p.m., members only, open to the public during regular visiting hours

Talk: “Claudia Rankine and Carrie Mae Weems” at NYPL
What does a genius have to say? You will find out if you go see the award-winning poet and playwright Claudia Rankine (who is no slouch herself) sit down for a conversation on how poetry impacts other art forms with internationally renowned artist Carrie Mae Weems, who in 2013 won the prestigious MacArthur Genius Grant. If you have yet to attend this series of talks, which is a collaboration between the New York Public Library and the Academy of American Poets, then try to hit this one–it’s going to be a doozy.
New York Public Library, 5th Avenue at 42nd Street, New York, 7 p.m., RSVP required

Opening/Performance: “Sam Falls with Hart of Gold and Oldd News: September Spring” at The Kitchen
Best known for his process-oriented paintings and sculptures involving photography, natural phenomena and the passage of time, artist Sam Falls is turning to performance for this series titled “From Minimalism into Algorithm,” brought to you by savvy local curator Lumi Tan. For “September Spring,” Mr. Falls will team up with the dancers Hart of Gold (Jessie Gold and Elizabeth Hart) to make 24 paintings daily through a choreographed dance to a soundtrack by Oldd News, a band led by Mr. Falls’ god-brother, Jamie Kanzler. The exhibition, which will expand over time, commemorates the life of Mr. Kanzler, who died in 2013 at the age of 24..
The Kitchen, 512 West 19 Street, New York, 6-8 p.m., performance at 7 p.m.

Opening: “Picasso Sculpture” at MoMA
This will be the largest show devoted to the artist’s three-dimensional works in the U.S. in nearly 50 years, if you can believe that. With approximately 140 sculptures, photographs and works on paper—including many pieces that have never previously been exhibited on this side of the Atlantic—the survey spans most of Pablo’s lifespan (1902 to 1964.) From his early Cubist and Surrealist assemblages to later ceramic and cut sheet-metal works, this major exhibition from the quintessential Modernist master is bound to elevate this “painter’s” brilliant and unique sculptural language.
Museum of Modern Art, 11 West 53 Street, New York, 7-9 p.m., members only, the show opens to the public September 14

Opening: “Roy Lichtenstein: Greene Street Mural” at Gagosian Gallery
Larry Gagosian is clearly mad with power. For his latest museum-quality exhibition, he has recreated Roy Lichtenstein’s famous Greene Street Mural (which was made for Leo Castelli Gallery in 1983) as a temporary 18-by-96 ½-foot wall painting. Produced by the artist’s former studio assistant and based on documentation of the original, this massive creation contains a playful montage of imagery and forms drawn from throughout Lichtenstein’s artistic career. The massive mural is accompanied by related source materials, drawings and studies, along with a selection of Lichtenstein paintings and sculptures from that period.
Gagosian Gallery, 555 West 24 Street, New York, 6-8 p.m.

Opening: “Mike Kelley” at Hauser & Wirth
This is New York’s—and for that matter, America’s—first chance to see these late Mike Kelley works, which merge light, sculpture and video into a sprawling installation, in which Kelley takes the classic American hero Superman as his point of departure. Titled Kandors, after Superman’s birthplace and the capital city of the planet Krypton, Kelley’s fantastical pieces are based on illustrations of the mythical city by various artists from different periods of the Superman comics’ history. The opening will be packed, so I suggest you get there faster than a speeding…well, you know.
Hauser & Wirth, 511 West 18 Street, New York, 6-8 p.m.

Talk: “Terrible Beauty” at the Morgan Library & Museum
In conjunction with the exhibition “Hidden Likeness: Photographer Emmet Gowin at the Morgan,” art and idea publisher Cabinet has invited a group of artists to explore the relationship between beauty and catastrophe. Laylah Ali, Peter Rostovsky and Lisa Sanditz—artists who approach the concept, respectively, through figurative drawings, sculptural installations and landscape painting—join Mr. Gowin for presentations on the topic before the discussion gets thrown to the public.
The Morgan Library & Museum, 225 Madison Avenue, New York, 7-9 p.m., $15

Opening: “Keltie Ferris” at Mitchell-Innes & Nash
A former Yalie who has taken the art world by storm with her fizzy Technicolor abstractions, rising star Keltie Ferris is back with her second solo show at this gallery. The colorful exhibition will include 12 new abstract paintings that she made during a recent stay in Los Angeles, as well as several of the artist’s figurative body prints on paper. The large abstractions mix lively brushwork with bold spray painted areas, while the works on paper (inspired by the body prints of David Hammons) capture the imprint of Ms. Ferris’ clothed body with pigments and oils over a network of brushed, linear forms.
Mitchell-Innes & Nash, 534 West 26 Street, New York, 6-8 p.m.

Opening and After-Party: “Wardell Milan: The Charming Hours” at David Nolan Gallery
Fresh off group shows at the Savannah College of Art and Design and The Studio Museum, where he was also an artist-in-residence in 2003, Wardell Milan gets his first solo exhibition with David Nolan Gallery. The show features large-scale drawings of nudes in idyllic settings, photographs of dreamy tabletop dioramas made from collaged porn images and family photos and paintings of tulips that reference Dutch masters. Afterward, guests head downtown to The Wooly for an invitation only celebration.
David Nolan Gallery, 527 West 29th Street, New York, 6-8 p.m., after-party to follow, invite only

Festival: “Photoville” at Brooklyn Bridge Park
Welcome to hipster heaven.“Photoville,” a festival exhibition of over 60 photography exhibitions displayed inside and around repurposed shipping containers, returns to Brooklyn Bridge Park for its fourth annual incarnation. Besides exhibitions of new photography, the two-week event features nightly outdoor projects, site-specific works, talks and workshops, and even a food and beer garden brought to you by the artisanal geniuses behind Smorgasburg and the lovable folks at the Brooklyn Brewery. Be sure to catch the night of music photography and street art, curated by legendary British photographer and documentarian Janette Beckman on the opening day. 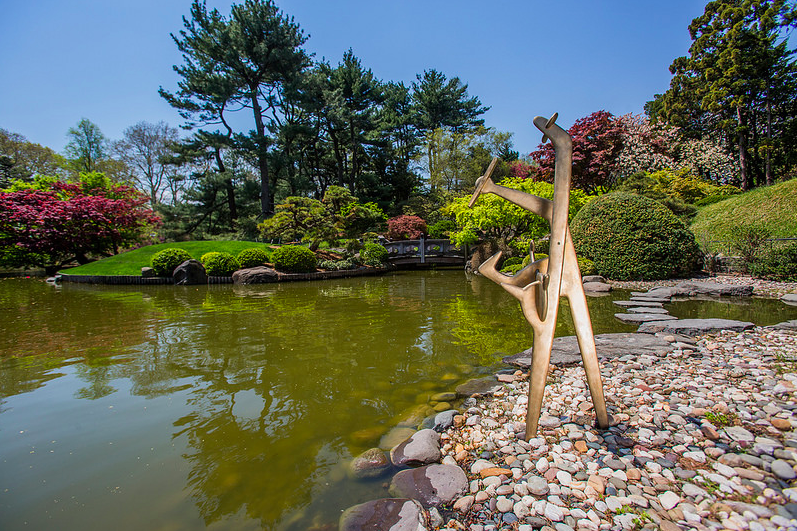