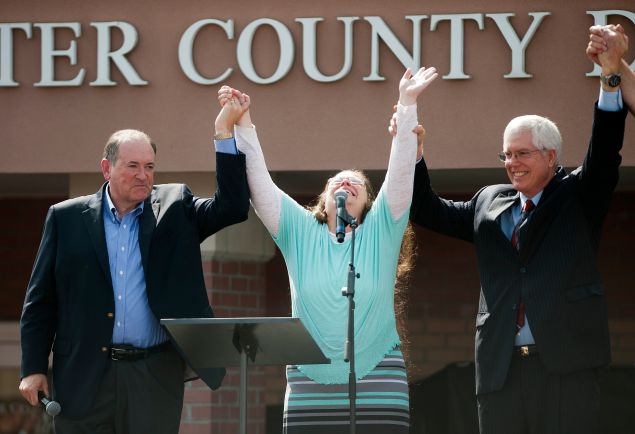 Kim Davis, the Kentucky clerk who refused to issue marriage licenses, was released from prison last week, and yesterday, said she would no longer block licenses for same-sex couples, but would not let her name appear on the paperwork.

Fine. Now can we all go back to the way things were before we had ever heard of this woman?

I realize the irony in advocating that people stop paying attention to someone in a way that calls attention to that person, but I’m still seeing people write about her, and it needs to end. She had her 15 minutes of fame. Second-time presidential candidate and former Fox News Host (who is also the former governor of Arkansas) Mike Huckabee got to play his “Pastor Bob” character. He got to spring into action due to the fact that someone claimed religion as the reason for their not doing something.

Honestly, at this point Huckabee should take a page from McDonalds’ 1990s playbook and change his presidential campaign slogan to “Did somebody say religion?” Because that seems to be the only time he’s able to get any attention.

The spectacle last week when she was released from prison was great for Davis. Who among us gets the chance to have presidential candidates (of the opposite party, no less) put together an event honoring us where we walk out to the theme from Rocky?

I don’t want to see headlines in a few months stating: “Kim Davis running for Congress.”

But for all the love and support she received, it’s now time to go quietly back into reality. I don’t want to see headlines in a few months stating: “Kim Davis running for Congress.”

We’ve been through 15-minutes-of-fame candidates. Remember Joe the Plumber? He was famous for all of three minutes just for asking then-candidate Barack Obama a question about taxes. He ran for Congress (and lost). Texas State Senator Wendy Davis gained national attention after filibustering a late-term abortion bill for 11 hours. She ran for Texas governor based on that (and lost). We don’t need another flavor-of-the-month candidate running for office.

The strangest thing about Davis’ fame has to be the fact that she caused prominent Republicans to root for a law-breaking Democrat. In what world would this have happened had Davis not broken a rule these Republicans thought was wrong?

Imagine the outrage if another bureaucrat refused to issue a gun license because of her personal beliefs. Or imagine, as Judge Andrew Napolitano, a Fox News contributor, pointed out, a Roman Catholic refusing to issue marriage licenses between Catholics and non-Catholics. Elected bureaucrats can’t let their personal beliefs interfere with their jobs.

The Supreme Court didn’t rule to Davis’ liking when it came to same-sex marriage, so in response, Davis stopped issuing marriage licenses to anyone—even heterosexual couples. This was her protest. Her deputies could have signed and issued the licenses without Davis’ signature, as allowable under Kentucky Law, but were coerced into not issuing licenses for fear of sanction from Davis.

So not only was Davis breaking her oath of office by refusing to do her job, she was also forcing her subordinates to comply with her beliefs in not issuing the licenses either. The irony of supposedly standing up to those who force their beliefs onto you while simultaneously forcing those beliefs onto others was apparently lost on Davis.

Someone who refuses to do their job—which is to uphold the constitution as an elected official—is no hero. And that person certainly should not even be considered for a position in the legislature. People have enough problems with politicians refusing to do their jobs, we definitely shouldn’t even think about electing one whose claim to fame is exactly that. 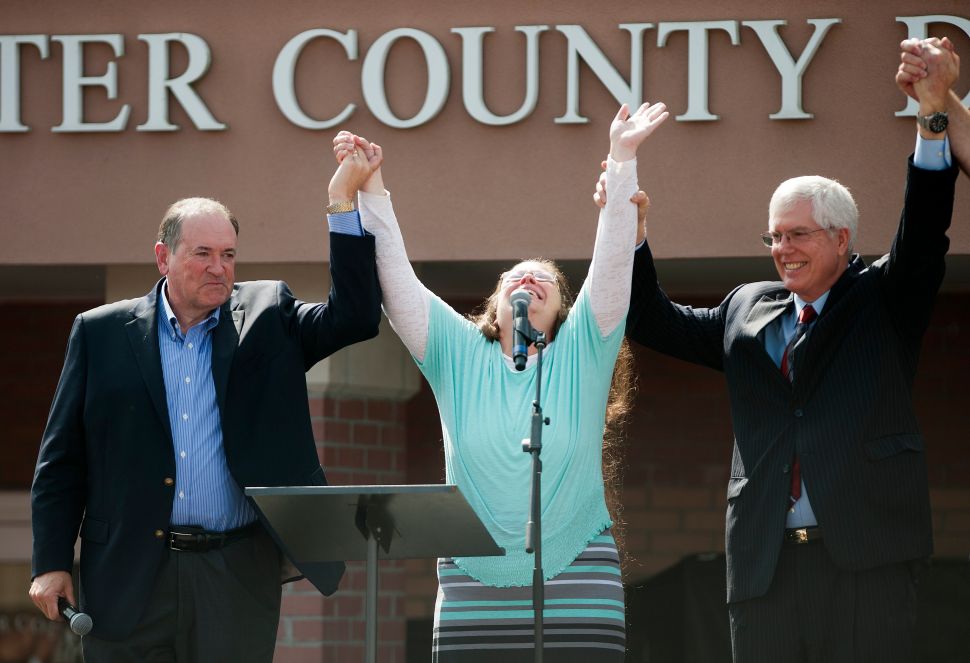