I met Ray Kelly last week at a coffee shop in Midtown. A compact man in a tailored pinstripe suit, the often stern-faced former police commissioner was surprisingly loquacious and smiled easily. During our interview, several strangers approached him. One man yelled “semper fi” at the ex-Marine. A woman asked him to come back and run the city.

In your new memoir,Vigilance: My Life Serving America and Protecting Its Empire City, you are critical of Mayor Bill de Blasio. Has he done anything right?

One thing he did was to select Joe Esposito [who served in the Bloomberg administration with Mr. Kelly] as the commissioner of the Office of Emergency Management.

Do you have any advice for the mayor?

A lot of people have the feeling we’re drifting, that quality of life is slipping, that there’s a lot of concern that the city will revert to the problems we’ve had in the past. That’s something people say all the time.

Build on what happened in the past. Stop with the denigration, stop with the criticizing, accept the fact that you’re now in charge … There’s a complaint he’s never done a town hall meeting. Town hall meetings are demanding but I think that might be something to do, depending on the neighborhoods.

Progressives attacked you for increasing stop-and-frisks. How do you get more minorities to trust police?

Police are the bearers of bad news: they are giving out summonses, they are authorized to use force—authorized in some cases to use deadly force. They are different than firefighters who everyone wants to see when there’s an emergency. So I think you always have to work at your relations. Every day it’s a challenge and every day there’s going be some tension in some community with the police. This quest to have the police loved, it’s never going to be achieved and what I say is the goal is to have mutual respect. Respect on the part of the police for the communities they serve and vice versa. It’s never going to be fully addressed. It’s basically a laudable goal that can never, never be reached.

After the outcry over topless women in Times Square, Police Commissioner Bill Bratton suggested tearing up the pedestrian plaza.

I don’t think you make a $40 million change ripping up [the plaza] because of perceived
aggressive panhandling. You enforce that with undercover officers who film it and you continue to do that so behavior improves.

Look at how many people there are in Times Square. New York has now surpassed Disney [World], under the Bloomberg administration surpassed Orlando, as the number one tourist attraction. A lot of it just has to do with the desirability of the city. And people, where do you put them? You can’t walk down the sidewalks there and who’s to say if this was ripped up that these same characters are not going to be on the sidewalk?

Do you have any relationship with Bill Bratton? Do you credit “broken windows” policing with bringing down crime?

We don’t have any relationship. I never worked with him. He followed me in two jobs. We don’t have a negative relationship; I mean, this is something newspapers like to play up. My issue is with the mayor, and the mayor’s tone. He sets the tone for the Police Department and to the extent the commissioner has to defend the mayor, I understand that.

I never heard the expression “broken windows” ever used in the Police Department. But you have to take care of quality of life issues and Mayor Bloomberg put in a 311 system so that these quality of life issues surfaced through the 311 system. Each precinct has a computer where 311 complaints surface, the desk officers are looking at it, so they have a queue, they have to address these things. You don’t just walk away from it, you never walked away from it. The notion that police are walking away from it, I don’t know where that came from. When I was a cop, we were addressing conditions. I never heard the expression, ever, in the department. I know that George Kelling and [James] Wilson wrote this piece in the 80s but in terms it being used operationally, no.

You don’t like that the city now, unlike during the Bloomberg years, is proactively settling lawsuits for large sums of money.

We’re way too willing to settle cases. One of the things that I proposed is something called the Chicago Plan where you basically litigate everything. It was ultimately rejected by the Law Department. Look at the Central Park jogger case. Now, as far as I know, nobody in the Law Department—which is a pretty liberal place—wanted to settle that case. They wanted to go to court and the city or certainly with the acquiescence of this mayor and the comptroller, they didn’t need to pay that amount of money. I think in a bizarre sort of way they think it reflects negatively on the past administration so [they say], ‘Let’s give them a lot of money because hey, that looks mistakes were made in the past administration.’

You write that you identify as a civil libertarian. You also presided over a police department that’s been compared to an army.

I don’t see anything inconsistent at all. I brought in top-flight attorneys who worked for me and went over all of the reports the intelligence division was developing and the tactics and strategies they used.

You resented the Pulitzer Prize-winning AP series about the NYPD’s spying on mosques.

We had a demographics unit, yes. We are the most diverse city in the world. We wanted to know where people lived. Why did we do that? One of the reasons was during the Iraqi War there was a town in Libya that produced, I think, 12 suicide bombers. New York is very tribal. If you’re from Moldova, you’re probably living in an area that has Moldovans in the Bronx. I wanted, we wanted, that granular information. That’s why I put a demographics unit in and as I say in the book, the AP said no arrests resulted from the demographics unit. Yeah, so? We said in there, that’s like saying, “Derek Jeter never scored a touchdown” because that’s not what they were there for.

Other than September 11, what was your worst day on the job?

When cops are killed we have to notify the wife or mother or father. They’re picked up by a highway patrol car or in a helicopter and brought into the city not told what’s happening, not told what’s going on. They know that their loved one is injured so you’ve got to inform them. It is always gut-wrenching. Bringing them in to see the body. There’s no easy way to do it.

What did you learn as a beat cop that helped you as commissioner?

I loved the excitement of it, the adrenaline flow. I also learned it’s a real opportunity to help people face-to-face: to intervene in a domestic violence situation, to give somebody $20—which I did on a few occasions. You see up close how people are being hurt or being affected. You’re not an academic. You’re not watching it on television.

Mr. Kelly will be speaking about his new memoir at the 92nd Street Y on October 8. 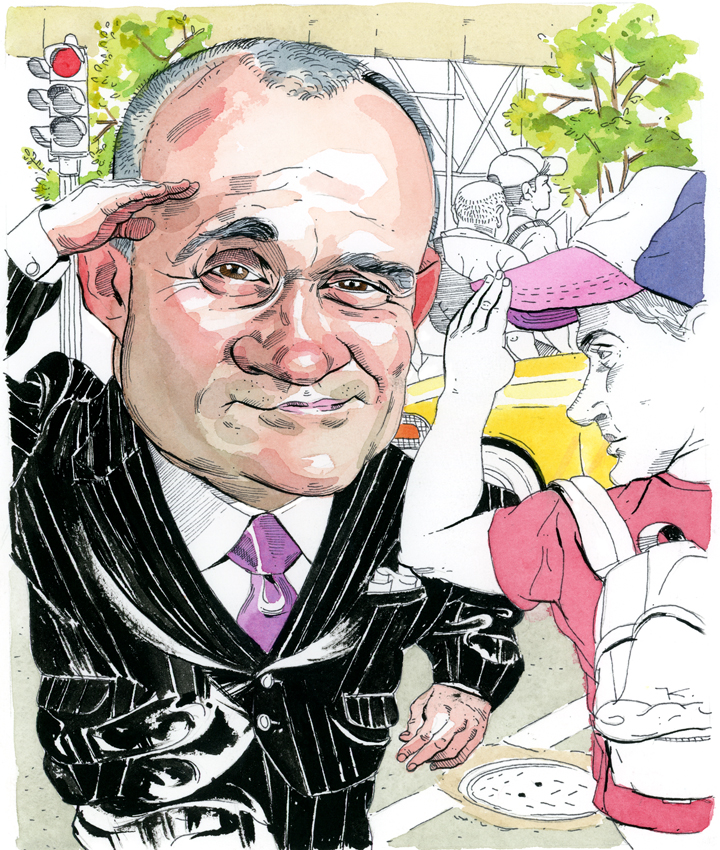