For a series that’s categorized as a ‘procedural’ there really wasn’t anything that was routine about the season 17 opener of Law & Order: SVU.

Ok, so there was detective work and legal wrangling, but even within the confines of those areas, nothing was quickly resolved or absolutely concluded, elements that surely fall outside the parameters of the traditional procedural drama.

In fact, even though a verdict was reached in the criminal/legal case that the episode was centered around, there were still plenty of loose threads that could absolutely lead to some catastrophic unraveling in the future. And, if there’s anything that fans of SVU have learned in recent years, that actually happening seems highly probable given that with this regime of writers and producers a prison sentence doesn’t necessarily mean that we’ll never see certain offenders again. A chilling thought for sure. (Evidence of that: The red-headed juror from Lewis’ trial re-appearing, WTF!)

This two-hour premiere began with a gruesome scene as a body washes ashore (haven’t criminals learned by now that bodies put in the tend to wash ashore???). The M.O. of this crime seems eerily similar to the work already-behind-bars murderer Dr. Gregory Yates. Trouble is, as mentioned, Yates was already locked up, so how could he have committed this crime?

Rollins, who has developed a rather twisted repertoire with Yates, meets with him in prison to suss out if he could have somehow done this before landing in the clink or if he knows who might be copying his moves. Yates, a true sociopath, revels in the attention and uses Rollins to acquire a few favors before he points the finger at the current Medical Examiner Dr. Carl Rudnick, an old pal of his.

After some bizarre twists that involved a disgusting conjugal visit, Rudnick dressing as a woman and an uncomfortable but slightly comedic road trip, the now former M.E. goes to on trial for murder.

In the courtroom, Barba faces opposition from two, yes two, defense attorneys, both well-known to the SVU faithful – Rita Calhoun and Jon Buchanan – and just when it seems like the ADA might lose the case, a videotape of Rudnick emerges that shows him uttering that he, ‘killed them all.’ After that, he accepts a deal and in the chilling final scene he and his prison buddy, Dr. Yates, settle in for what’s sure to be some interesting conversation as they dine together.

While that summary was a mere four paragraphs there was actually quite a lot of story packed into the two hours. Yes, the skeleton of the plot was derived from the real-life case of Robert Durst, which was chronicled on HBO’s The Jinx, but once again the SVU team used that as just a foundation for the story they really wanted to tell, a narrative built around identity, specifically, who you think you are, who you want people to think you are, and who you really are.

In a bit of an homage to Oscar-winning film The Silence of the Lambs, the relationship between Rollins and Yates serves to show that, yes, Yates is demented and takes delight in shocking people with his observations and actions, but the exchanges between the pair really function to reveal Rollins’ confusion and insecurities about her own life; much like in the film as murderer Dr. Hannibal Lechter gets new FBI recruit Clarice Starling to reveal details about her painful childhood.  In the SVU scenario, Rollins history clearly shows that she’s drawn to dangerous and unstable situations and that that pattern is obviously still intact. In the past, Rollins has seemingly often made huge decisions about her life only when forced to do so by an outside entity of some sort. It’s one thing to sort of roll with the tide and deal with things as they happen, but it’s another to back yourself into a corner, sort of knowing that you’re doing it, and then realize that you can’t extract yourself from the situation without a large amount of discomfort. This has  seemingly been Rollins’ routine since she arrived in the Special Victims Unit.

While it might not have been an actual plan by the creatives at SVU to have Rollins get pregnant, it couldn’t make for a better storyline for this character. This situation opens up a whole gamut of choices and decisions for Rollins and seeing how she handles each as it comes will certainly make for some compelling character development. Currently, her coworkers know that Rollins has issues, in which direction will this change in her status move the dial on how they perceive her? That aspect of this storyline will also be interesting to see play out this season.

In a fun fact, Kelli Giddish said that she had watched The Jinx, but found herself in a unique situation when she did. “I was up really late one night when I watched the last episode. I was like, ‘oh my God, that did not just happen!’ I couldn’t breath! But it was like 2 a.m. and my husband was asleep in the other room so I had to kind of keep it down. I have to admit that when it was over, I had a hard time getting to sleep.”

Back to the SVU squad…

How about that Carisi? He sure has made some strides in figuring out his role within in the team and what he needs to do to get the job done, hasn’t he, but… it seems like he still has a ways to go. Hopefully, even as he becomes more knowledgeable about the inner workings at SVU, let’s hope that he doesn’t lose that sort of ‘big lug swagger’ that makes him kind of annoying and endearing at the same time. Having said that, Carisi thinks that he’s knowledgeable and charming and watching to see if his ideas about his personality and others perceptions of him ever truly mesh could make for some amusing transactions going forward.

Fin continues to be excellent at both his job and at stepping in to dole out needed, if not always wanted, advice. He’s like that relative you have who doesn’t say much but when he/she does, it’s always to your benefit to listen. Fin really has no misperceptions about who his and how others see him, a rare quality in a human being and one that makes for some interesting interaction with others, whether they be equals or higher-ups.

That pendulum of critical thinking about what justice means that constantly swings between Benson and Barba is still one of the best things about the current SVU administration. Never knowing week-to-week if those two will get along or be at odds is an element that isn’t just compelling but quite accurately representative of every workplace. It doesn’t matter whether said co-workers are catching murderers or making widgets, there is constant ebb and flow in every office and getting to watch that play out with these characters is at once sort of familiar and somewhat unsettling, a scenario that is once again, true to real life.

While there wasn’t much time in the premiere to get a real read on Benson’s current status as squad leader, after the tumultuous year she had last year, it would be easy to believe that she’s ready to feel a bit more settled in her job. Of course, that’s really never as easy to achieve as one thinks it is. Given her reaction to Rollins’ bombshell, she’s clearly trying to be the cool, non-panicky boss, all the while probably secretly thinking, ‘crap.’ Again, we’ve all been there, just when you think things are moving toward a nice plateau someone throws a wrench in your plans. But, to her credit, this isn’t the first time as commander that she’s had to deal with upheaval, right? While everyone is concerned about how Rollins is handling Amaro’s departure it seems that everyone has forgotten that he and Benson (while not sleeping together) were close as well. (He slept on her couch for crying out loud!) So, while Benson is working to establish that she’s tough but tender when it comes to her employees, inside she’s probably mashing her teeth a bit at all of it. And, now that we know Deputy Chief Dodds is sticking her with his son as her new Sergeant she’ll have to deal with some nepotism as well. Nobody wants that in their workplace, right?

Even the character structure within SVU deviates from the procedural norm. Yes, it’s become more evident with the addition many serialized elements, but just looking at the opening credits, with the addition of Carisi and Barba and the shifting of Rollins and Fin, this rather fluid personnel team shows that while many may think SVU is just another crime drama, this series sees itself as something more than that, and rightfully so.

Showrunner Warren Leight has said this season is all about Transitions. Under that umbrella should be the subcategory of Identity as season 17 of SVU will no doubt continue, as they have in the past, to show that section of the public that still writes the series off as just another hour long procedural that that’s definitely a part of what the series is, but it’s certainly not all that it is. Just as the characters on the show are exploring the facets of their identities, so clearly is this series, as it has been for past few seasons.  It’s all about who people think you are and who you really are and the reconciliation of those, often opposing, views. The exploration of that this season on SVU will make for some very interesting television for sure. 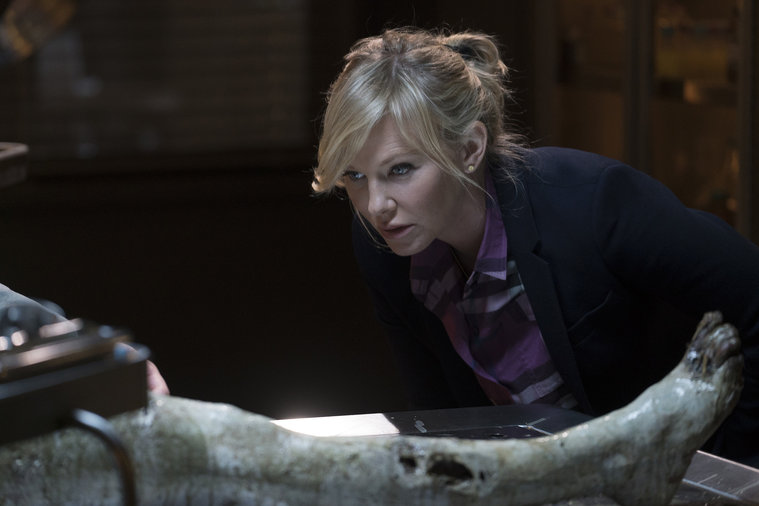