Mr. Graham reiterated many of the usual arguments against the deal: that Iran will use the revenues from a rejuvenated post-sanctions economy to fund international terrorism and to develop sophisticated ballistics systems capable of striking Israeli and American targets. He also voiced fears that the Middle Eastern nation would use the funds the arrangement would unfreeze in international banks to either continue to develop atomic weapons in secret or to simply reanimate its existing program after the agreement’s 10 year expiration—and called the plan “the marriage from Hell” and “the worst miscalculation since Munich.”

“The Ayatollah hates everybody here,” the senator, known for his hawkish stances and foreign policy acumen, shouted. “You might as well write the check to Hezbollah! You’re crazy to give him the pathway to a bomb. You’re crazy to give him a missile to deliver it. And you need to understand who he is. He is a religious Nazi. He wants a master religion, not a master race. He would kill everybody here if he could. When he says ‘death to Israel,’ he literally means it. When he says ‘death to America,’ he wants to accomplish it.”

“Let me say this, if they kill their own kids, think what they’ll do to yours,” he continued

Mr. Graham pointed out that, as chairman of the Senate’s Appropriations Subcommittee on State, Foreign Operations, and Related Programs, he oversees allocations of federal dollars to the United Nations and the International Atomic Energy Agency, which both support the plan. The politician threatened to strangle both groups of funding unless they fight for a tougher deal that would force Iran to completely and permanently dismantle its nuclear infrastructure.

“You will not get a penny until you give us a better agreement,” he said, vowing to vote against the deal and propose further sanctions against Iran. “This is not over!”

The southern Republican’s campaign for the presidency has gotten off to a stumbling start, polling near the bottom of the 17-man GOP field with just one percent of primary voters supporting him nationally, and garnering just five percent of the vote in his home state. Some suspect he will be among the first to exit the race.

Mr. Lieberman, an Orthodox Jewish Democrat known for his strong support of Israel during his 24-year tenure in the Senate, decried what he described was a weak dovish turn in his party’s politics.

“What’s happened to the Democratic Party of John F. Kennedy that I joined and signed up for a long time ago? A party that believed you could be a progressive on social issues, and follow a strong and muscular foreign policy?” he said.

Mr. Lieberman was the Democratic nominee for Vice President in 2000, but lost a party primary in 2006 to a more liberal candidate who attacked the incumbent’s support for the Iraq war. Mr. Lieberman won the general election as an independent, and campaigned for Republican presidential nominee Sen. John McCain of Arizona, in 2008.

Ms. Gillibrand, for her part, simply restated the usual arguments for the deal in a statement her office sent to the Observer: that Iran, with its 19,000 uranium-enriching centrifuges, is currently just months from obtaining an atomic bomb and that only the Joint Comprehensive Plan of Action can stave it off. She also argued that the European Union, Russia and China would move to enact the agreement with or without the United States, leaving the country with the sole recourse of an expensive military attack.

“Without a deal, our options will be limited to insufficient unilateral sanctions, an invasion with yet another massive and costly land war in the Middle East, or a bombing campaign that offers nothing more than short-term gain under the best-case scenario,” Ms. Gillibrand said. “Our goal has been, and remains, to prevent Iran from developing a nuclear weapon. We have far more ability to achieve that outcome if we approve this deal‎.”

Congress must vote on the deal by the 17th of this month—but even if it decides against it, most observers do not believe there is sufficient opposition to override an inevitable veto by President Barack Obama.

Mr. Schumer broke with Ms. Gillibrand to oppose the deal, as have several members of New York’s delegation to the House of Representatives. But three Congress members from Queens and Brooklyn came out in favor of it in the past two days, in addition to Manhattan Congressman Jerrold Nadler.

The emcee of the rally, Jeffrey Wiesenfeld, credited Mr. Graham with the decision to hold the demonstration outside Ms. Gillibrand’s office. 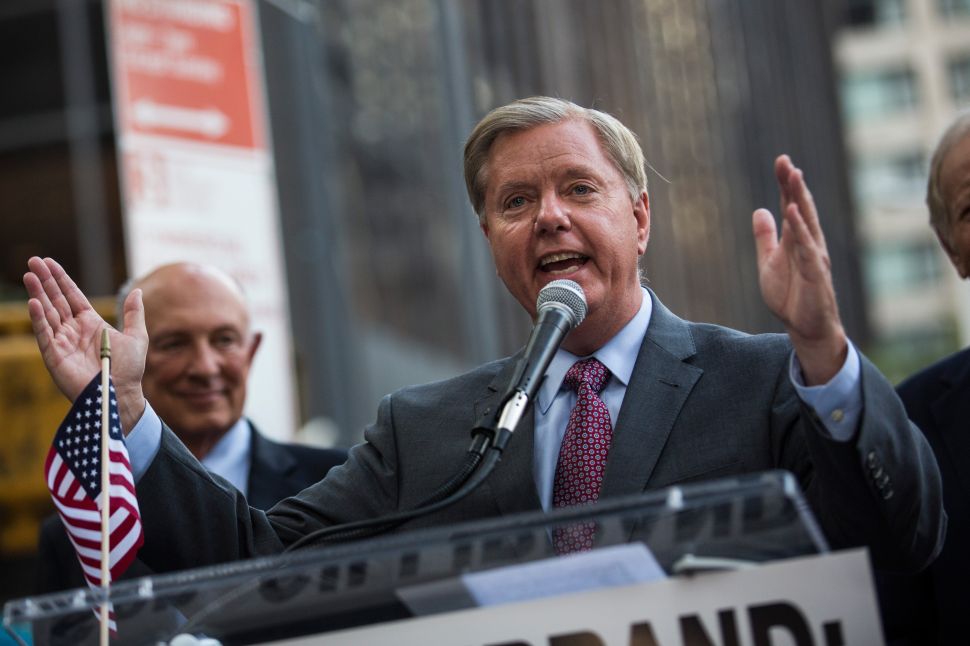