The late British parliamentarian Tony Benn once said, “The way a government treats refugees is very instructive because it shows you how they would treat the rest of us if they thought they could get away with it.” The quotation has been passed around lately in response to the refugee crisis in Europe, but it has a domestic application here, too, in regard to New York City’s ballooning homeless population. More than 60,000 people now sleep in shelters, a record high—and that doesn’t account for those living on the streets.

A rally on September 9 under the Metro-North overpass at 125th Street protested the NYPD’s policy to evict the homeless from encampments around the city. The policy seems to be a reaction by the de Blasio administration to complaints that the sight of homeless people on the streets and in the subway mark a return to the “bad old days” of street crime, decay and capital flight.

Picture the Homeless, an advocacy organization, compiled several stories to document the police harassment. “Cops have always messed with us, but in the last month it’s gotten really bad,” one Harlem dweller named Sarge said. Another Angel Starks, fretted, “You’ve got kids who come around assaulting homeless people in the middle of the night, and the cops don’t do anything about it because as far as they’re concerned, those kids are helping them do their jobs.”

Our choice to see homeless people as either victims or undesirable says a lot about us, and that seemed to be the reaction of many homeless rights activists at the rally. When confronted by members of the press, some asking condescending questions about being offended by public drinking, Brodie Enoch of Picture the Homeless shot back, “Every question that you ask could be solved with housing,” adding that “homelessness could be eradicated in about month.”

The group maintains that there are 3,551 vacant buildings and 2,489 vacant lots could house as a many 200,000 people. Obviously, that would require a significant investment by the city. But such a massive public works project is not as far-fetched as one might think. Utah’s homelessness population dropped by 91 percent from 10 years ago, thanks to a free housing program for the chronically homeless. An April report from Homes for Every New Yorker proposes 10 percent of all new subsidized housing be set aside for the homeless, the creation of more anti-homeless programs and a $15 per hour minimum wage. The last point is an interesting one, considering that the day of the Harlem rally the top headline from amNY was “Want to live in NYC? Better make $39 an hour,” a reminder that the rise in street poverty is correlated to the rise in real estate prices coupled with stagnant wages.

But on criminal matters, Mayor de Blasio has chosen to defer to his police commissioner, Bill Bratton, for whom matters of poverty and drug addiction are not economic issues or public health concerns, but rather indicators of a coming criminal invasion. This mindset isn’t just something at the top of chain of command; the sergeants’ union president urged his members while off-duty to photograph vagrants to show that the city had returned to pre-Giuliani Gomorrah thanks to the mayor’s supposed liberalism. 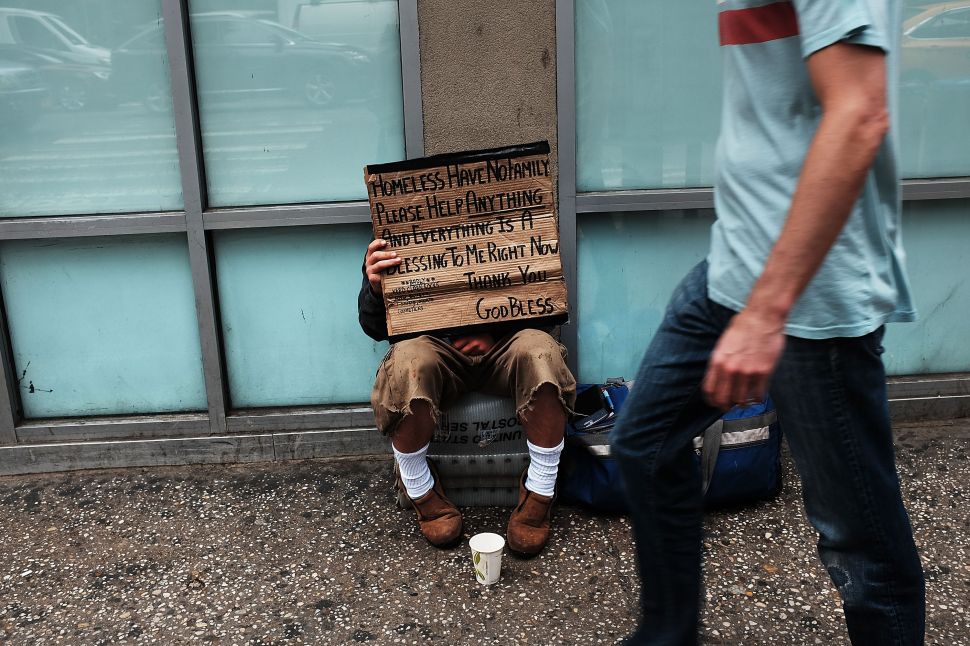