As the steadfast series Law & Order: SVU gets set to kick off their 17th (!) season, the cast and creative team behind the series recently gave some intel about what’s in store for the detectives at the 16th precinct this year.

“There are a lot of changes coming, many that will be noticeable right off the bat,” explains Showrunner Warren Leight. “First off, the squad room has been updated a lot. These detectives, especially Benson and Fin, have been living in this space for quite a while now and it just seemed like it was time to spruce up some things and change some other things for practical reasons. I felt like Benson probably just, at some point, said to everyone, ‘things need to change around here and here’s now we’re going to do it,’ and then she just made sure it got done.”

These physical changes aren’t the only alterations that will take place as the season progresses, says Leight. “This season there will be a lot of transitions within the team. These are necessitated by things that are happening in our characters personal and professional lives and that’s very realistic because that’s how it works in the real world; no one is stagnant. You can’t be. Things happen and you have to adjust to them, like it or not.”

One of the big transitions that viewers will surely feel is the loss of Detective Nick Amaro, who left to be with family in California at the end of last season.

Peter Scanavino, who plays Detective Dominick ‘Sonny’ Carisi, a character who was introduced last year, remarks that Amaro’s departure has meant that his character has had to step it up a bit. “Last year, Sonny was pretty green in that he wanted to be working on every case in some way, but he didn’t always really comprehend exactly what he needed to be doing because the things that were happening in the SVU area were so very different from what he knew up to that point. Now, he’s taking on an expanded role in the squad room and he’s starting to get how things really work. I feel like he sort of learned that from Amaro and he’s putting everything he learned from Amaro into play now.”

Another Detective who will surely miss Amaro’s presence, is Amanda Rollins, played by Kelli Giddish. Pregnant in real life, many have speculated as to whether Giddish’s pregnancy will be written into the series, and, more importantly, as Rollins and Amaro had a bit of workplace fling, that speculation has included questions about Amaro’s involvement should Rollins be expecting his child. Rest assured, as promised by Leight, these questions will be answered in the season premiere, and, in a very interesting manner as well. “Yep, fans will know very soon if Rollins is having a baby or not,” says Giddish with a smile. “I like that people are sort of anxious to know and I know that they have ideas about how things will go, but I think they’ll be surprised by the way it all plays out.”

While Giddish wouldn’t give away any more about that aspect of her character, she was eager to talk about the return of Rollins’ sister, Kim, (played by Lindsay Pulsipher) and the appearance of her mother as well, who will be played by veteran actress Virginia Madsen.  “I can’t wait to work with Virginia.  I just know that what happens between Rollins and her sister and her mother is going to be crazy good. When fans talk to me, they talk a lot about my sister and they say that they love those episodes so I’m ready to do more of that for sure.”

Rollins is often paired with Detective Odafin ‘Fin’ Tutuola, played for the near duration of the series by Ice-T and although Fin has been with the squad for such a long time, Ice is convinced that this character isn’t in any hurry to take a leadership role, of any kind. “I think Fin just likes to be on the street doing the legwork,” says Ice. “When you’re a detective, if you’re not careful, you can get in trouble for some of things that you do to do your job, so Fin really only wants to keep his head down and stay out of trouble.” Ice reveals that he does have some personal experience in this area, “You know I was in the military and I was a squad leader, and I hated it. When someone in the squad messed up, I got in trouble so I kind of think I know how Fin feels. Let me just say, you learn there’s a benefit to riding shotgun rather than driving.” Then he laughed a little as he said, “The truth is, we can talk about this all we want, but it doesn’t matter what I want, it’s what the writers want and I’m here to do the job they tell me to do.”

Raul Esparza, who plays Assistant District Attorney Rafael Barba, discloses that he’s settling into the role a bit as he’s now in his fourth season playing the attorney. “My character was introduced as sort of an opposition to Sergeant Benson. But now, there’s this pendulum that swings between them that really works. I’m fascinated by the way the team interacts and how all of our relationships have evolved and I think that’s only going to get better.” Speaking more specifically about what’s in store for his character, Esparza says, “Barba has always been described as someone with brass balls; he could get what were considered impossible convictions.  He’s a guy with a lot of ambition and now we’re going to see what having that ambition means and just what kind of trouble it gets him in.” (Side note: True to his character, Esparza was eating while he did this interview!)

Mariska Hargitay, who’s character Olivia Benson was just named TV’s Favorite Female Character, (in a survey by entertainment marketing firm, Trailer Park), didn’t divulge much about her character, but did gush about some upcoming guest stars. “I saw the musical Hamilton and I was fangirling over that, hard.” She explains, “And we just did an episode with Daveed Diggs who plays Thomas Jefferson. What’s so cool is that we already have Leslie Odom Jr. recurring on our show (as Reverend Curtis) and he plays Aaron Burr in Hamilton. So we have Jefferson and Burr together in an episode. It’s awesome!” Then she calms down a bit and sort of whispers, “We get kind of star stuck around here sometimes.”

Leight is becoming known for pilfering amazing stage actors to take a turn on SVU, something that he admits he really likes to do. “I love going to the theater and seeing someone and then offering them a part. The rest of the country may not have seen them because, well, the majority of theater is here in New York. The actors are so happy that people are seeing them in the play or musical they’re doing and that now they get to be introduced to the television world by being on the show. Doing that makes me very happy.”

On the heels of this information, Leight admits that there are other familiar guest stars returning this season, including defense attorneys Robert Sean Leonard (ADA O’Dwyer), Elizabeth Marvel (Rita Calhoun) and Delaney Williams (John Buchanan), as well as Peter Gallagher as Deputy Chief Dodds. “We’re sort of building our own repertory company here and we’ll continue to expand that when we can.”

Executive Julie Martin says that all of these things – exciting guest stars, returning actors and characters, with in-depth character exploration, and the inclusion of the crime-solving element – are what make the show so successful and have led to its longevity. “We continually work to build on what we have and I think people who watch the show – either on a regular basis or if they just drop in for an episode or two – really get that. Sure, we’re classified as a procedural series, but we don’t just take a story from the headlines and tell that specific story. We fully fictionalize it and show how our characters are reacting to it. We explore all of the angles so that the audience sees every side and can decide how they feel about what’s going on. That’s what makes for compelling television and that’s what we strive for in every single episode.”

Esparza jumped in to say that although the show is entering its 17th season it still has the energy of a new series. “I’ve been on shows that are just starting out and there’s an excitement surrounding those shows. It’s all about the possibility of what’s to come. Even though this show has been in production for a while, there’s still that ‘new’ feeling and excitement to it every day. You would think that feeling would fade, but it hasn’t here.”

Among other things, Leight has also become known for his forward thinking ideas about where the series is headed. With this in mind, he reveals, “I like to know the last few words of the season and sort of work toward that throughout the year. So I have my ideas right now, but I’m not telling anyone at this point. You’ll just have to watch and see what unfolds.” 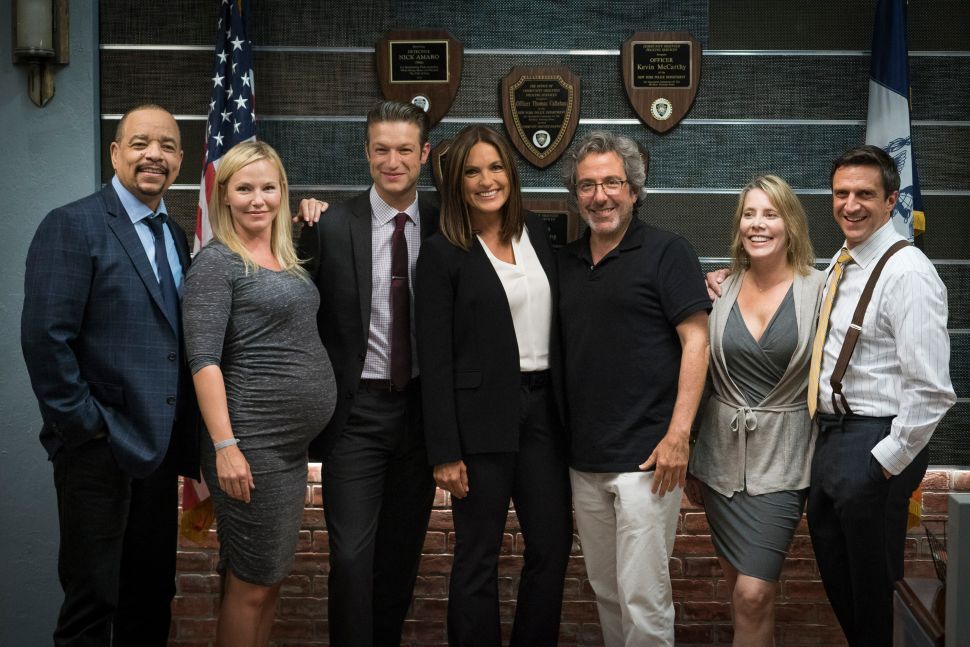