The New Golden Age of Prestige Drama has a hallowed tradition of really, really bad dinner dates. “Soprano Home Movies” showed Tony and Carmela’s lovely weekend at the lake with their relatives and friends Janice and Bobby Baccala devolve into insults, recriminations, and violence. Walter and Skyler White endured several brutal evenings with Hank and Marie Schrader. The less said about Cersei Lannister’s wine-saturated soirees with the Starks and Tyrells in her orbit, the better. Clearly, “Party of Four,” this week’s Masters of Sex, hoped to be an entrant into that pantheon. Unfortunately for everyone involved, it was a meal we’d have been better of skipping.

“Show, don’t tell” is advice so frequently repeated as to constitute a cliché in and of itself, but an episode like this proves the alternative is still far worse. Almost no sooner does Alice, Dan Logan’s long-suffering but previously unseen alcoholic wife, show up at the ritzy dinner Bill orchestrated in order to split Dan and Virginia up than she begins dispensing history lessons about her husband’s infidelity, with all the hamfisted monologuing of a professor in a science-fiction film infodropping exposition about how the interstellar mining colony’s force fields work. We had an entire season to learn about how the perfume magnate loved and lost his previous mistresses, during which the show could have devised any number of ways for the facts of his behavior to emerge organically from the narrative, and the best it could do was to concoct a character to lecture us about it? The ease and enjoyment with which actor Judy Greer—at this point the most infamously underutilized performer in Hollywood—portrays Alice’s slide into inebriation indicates how much more could have been done with this role.

But when it comes to dully speechifying about the emotions and intentions of other characters, Alice is hardly alone. Bill, Dan, and Virginia all spend the bulk of the evening effectively pointing a drunken finger at one another and saying “You know what your problem is?” before answering their own question at length. Back in St. Louis, Libby and Paul and even poor little Johnny Masters fritter away their screentime doing much the same thing, talking to one another about their problems, or those of an absent third party. A better show—and the obvious go-to here is Mad Men, an apples-to-apples comparison if ever there was one given both series’ period-piece fixations on the causes and effects of infidelity in unhappy marriages—wouldn’t need to spell out how, say, Bill’s abusive father caused him to be an inadequate parent in turn, or how Bill cultivated a professional partnership with Virginia in part to maintain their sexual and romantic relationship. This stuff could, and should, and to large extent already did, emerge from their actions in the course of the story. Stopping the whole show short to make the characters spend an hour shouting shortcomings at one another is an easy, lazy substitute for a more rewarding approach.

Indeed, the real shame is that the performances would have been more than equal to the task of taking the scenic route. Watching Bill revel in the mayhem he’s caused at around the halfway mark, it’s striking how much better suited this material is to Michael Sheen’s strengths than Masters’ usual pattern, alternating humorless bullying with hapless inadequacy. If you’ve seen Sheen camp it up as the archvillain in either the Tron sequel or the Twilight saga, his skill at playing a Loki-like alpha asshole, smirking and smarming his way toward supremacy, is hilariously obvious. This was an all too brief glimpse of that comedic-villain talent.

The same is true of Caitlin FitzGerald as Libby. As I’ve said over and over, her unenviable position embodying the most relentlessly thankless role on prestige TV is unfair to her obvious talent and screen presence. During the past several episodes, her illicit but sincere domestic bliss with Paul has brought her light years farther than her usual wronged-woman naysaying and sublimating. To have that much happier and more rewarding relationship interrupted by trumped-up child-molestation charges is almost infuriating. For one thing, who fucking cares? We all know how the story of Masters & Johnson turns out, irrespective of the show’s many fictional fabrications and filigrees. Are we really expected to worry that the author of Human Sexual Response will go to prison or have his reputation destroyed? For another, we also know how the Masters’ marriage winds up. Why create this perfectly convincing extramarital relationship only to detonate it at the last minute, given the fact of the couple’s eventual divorce? It’s a waste not only of the extra layers FitzGerald has been able to unveil in this new plot, but also of the viewers’ time and attention.

It’s never a terrific idea to evaluate a work of art by juxtaposing it with the work you’d prefer it to be—this is the critical equivalent of fantasy football, more or less—but Masters of Sex makes it almost impossible not to. After all, the cast is strong enough to make concocting a superior use of their abilities all but irresistible: Josh Charles’s Don Draper manqué is a great antagonist, Greer’s drunken woman scorned is every bit as pleasurable to watch as you’d expect, Sheen is comic dynamite when utilized appropriately, FitzGerald shines every time she’s given the opportunity, and Lizzy Caplan is far better than Virginia Johnson’s wide-eyed lock-jawed one-note chagrin. The writing has enough moments of insight to make a consistent hour of such strong points a tantalizing prospect as well: Alice’s diagnosis that Dan “needs a partner, not a project” rings true, as does Virginia’s assertion that her role as just the latest of Dan’s mistresses is her problem, not Bill’s. There are even enough laugh-out-loud funny moments, from the group’s toast “to Human Sexual Inadequacy” to Masters’ constant refilling of Alice’s drinks, to conjure an image of a show with a lighter, defter, more satirical touch. Instead, we get an hour that’s about as enjoyable for the viewer as the dinner was for its four attendees. Check, please. 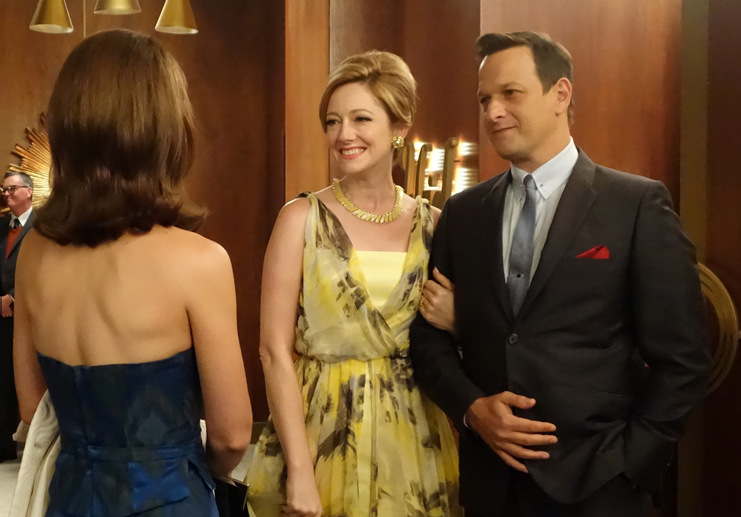