Let’s make like Masters and Johnson, dear reader, and analyze a sex scene. Specifically, let’s take a good long look at the scene in which Nora, the smart and dedicated young test pilot for Bill Master’s surrogacy program for treating single patients with sexual dysfunction, takes things a little too far with her initial subject. It’s the highlight of “High Anxiety,” the season’s ninth episode. It’s arguably the high point of the entire season so far.

First, and dare I say somewhat importantly given that the show is called Masters of Sex, it’s sexy. This is not just because actor Emily Kinney, (literally) late of The Walking Dead, is both gorgeous and nude for the duration, though that doesn’t hurt. Rather, it’s the atmosphere of mutually agreed-upon intimacy that she creates for her patient: matter-of-factly dropping her robe, smiling like a particularly pleasant librarian who’s happy to help a patron track down a hard-to-find reference book, telling him point-blank “Just remember, the whole point of today is to make you feel good.” Indeed, it’s precisely when he deviates from the sense that they’re both in this together by insistently pleading she jerk him off, flattening her beatific grin and turning an interaction geared toward pleasure into one fueled by pity, that the therapy goes sour.

It’s not that he’s behaving maliciously; any initial suspicion that he’d been faking impotence the whole time just to get in some sexy surrogate’s pants dissipated if not by the end of the scene then by the follow-up, when Bill doesn’t even bring up the possibility they’d been had. It’s that consent is sexy, to use the now widely out-of-favor phrase; it’s mandatory, of course, but it’s more than that as well, because the shared establishment and fulfillment of physical desire is the essence of the erotic. The moment he asks to take things further than the preset boundaries, the moment there’s a disconnect between their respective ideas about what is to take place between their bodies, the charge is dissipated no matter how willing a partner she winds up being. This is using sex to communicate character and theme in a way that fight scenes do in superhero movies or singing does in opera, and it’s impressive as hell.

The subsequent scene is even more so. It’s a deftly layered latticework of competing and conflicting character traits embedded deep within both Bill and Nora, its strands spinning out to connect with any number of previous scenes and storylines. A furious Bill berates Nora for violating protocol, a multifarious offense that simultaneously jeopardizes this patient’s treatment, calls into question the entire program, and constitutes disobeying a direct order from her superior. His rage, of course, resonates with his earlier treatment of the football-playing bully with whom his eventual rapprochement has caused so much trouble with his own son elsewhere in the episode, as well as his near-biblical confrontation with the bible-thumper who occasionally pickets the clinic.

Nora responds that her instinctive people-pleasing, such a boon to her in the program up until this point, is more compulsive than natural, arising as the the result of growing up in a loveless home with a physically abusive father who eventually abandoned her. Small wonder she’s drawn to Bill—she later says as much, revealing her responsiveness to his tirade—and that she went along with her pleading patient, an older, fatherly man. And when she asks for a second chance, Bill’s acquiescence makes just as much sense, not just because he too was beaten by his own dad and has come damn close to repeating the pattern himself, but also, it seems, because he remembers getting kicked out of hospital after hospital for breaking the rules by people who failed to understand his need to do so. That he’s rewarding the exact kind of unhealthy behavior she developed to please difficult men appears to escape them both.

But their post-fight meal together, eating Chinese takeout on the stairs in the dark while they talk about breaking the cycle of abuse, is such a simple joy for both of them that it almost feels churlish to point out the potential risks of their slowly growing relationship. This makes for a marked contrast with the two one-on-one heart-to-hearts Bill had earlier. The first involved him tearfully asking Virginia to forgive him and keep an open mind about the surrogacy program, initiated behind her back. She agrees, but it’s as bogus as the orgasm she fakes when she fucks him in order to lull him into a false sense of security about Dan Logan. The second conversation was a fun back-and-forth with Libby about how to handle inconvenient or duplicitous people—the first time they’d had any kind of rapport whatsoever in ages, a fact they couldn’t help but pick up on themselves. But Bill had to get drunk, and Libby tipsy, for this to take place; the people they were complaining to one another about were the people bollixing their respective affairs; and the sudden closeness led them only to the conclusion that, as far as their marriage goes, “We tried our best.” Bill and Nora may have issues driving them toward one another, but at least neither of them is quite aware of it.

Folks, we’re at roughly 900 words and counting, and we’ve talked about the construction and connections of a single scene. When was the last time this show served up anything this multivalent and memorable? Not with Virginia’s romance with the Perfume King, not with the teen angst of Bill and Virginia’s sad-sack children, not with the goofball Three’s Company comedy of Betty and Helen and their babydaddy Austin, close but no cigar with Libby and her newly widowed lover Paul. This, this is where Masters of Sex should be focusing its research, not on warmed-over family and workplace drama. No other show can do this. This one damn well ought to. 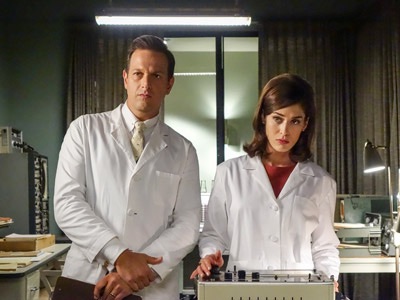