Last night, Masters of Sex Season Three’s tumultuous eight-year run drew to a close. Unfortunately, such fan-favorite plot threads as Virginia’s nerdy son who went to Vietnam for some reason, Betty and Sarah Silverman’s Knocked Up reenactment with the horndog doctor from Seasons One and Two, and Tessa the Bad Attitude TV Teenager were left hanging loose by “Full Ten Count,” the season finale. Who’d have thought that so many of the season’s burning questions would remain unanswered despite what felt like the better part of a decade of running time? It’s a shame, really: If the show handled its main storylines as poorly as it did tonight, its treatment of these time-wasting detours could have been a real hoot.

“Full Ten Count” was a day-in-the-life episode for the good men and women of the Masters and Johnson clinic—one hugely eventful day in which everything the show needed to happen before the end of the season happened all at once. (Well, almost everything: As noted, we never found out if Virginia’s son went Colonel Kurtz on us.) Dan Logan divorced his wife in Mexico, flew back to St. Louis, proposed to Virginia, was rejected, was un-rejected, and got on a plane back to Mexico. Bill Masters apologized to Gini for all his transgressions, agreed to pay off the family blackmailing him with child-abuse allegations, took off his suspenders for the first time since the Eisenhower administration, gave his surrogacy sweetheart Nora money for rent, got arrested by the undercover cop she’d secretly brought to the clinic, went to jail, told his wife he’d been having an affair, found out she already knew, told her he wanted to end their marriage, got left in jail by her, got bailed out by Barton Scully, told Gini he loved her, got rejected by her, chased her to the airport, then gave up at the last minute because he’d had a bad dream about losing a boxing match in front of his dad. All of these things simultaneously happened to Gini and Libby as well; Libby, as a bonus, found out her fiancé Paul skipped town after she dumped him. Meanwhile, a press conference for the second Masters & Johnson book apparently didn’t happen, which means a representative of the publishing company Little Brown was supposed to go through with his threat to expose everything to the press, because that would save his job, or something.

That “or something” is telling. So much of the writing was not just weak, but sloppy to the point of incoherence—and since the episode was written by creator and showrunner Michelle Ashford herself, picking its nits is an instructive exercise. For instance, the police chief, who sits on the clinic’s board, tells Bill and Virginia he can buy them some time if their arrests stay out of the press. But those arrests were engineered by the Committee of Decency, the fundamentalist Christian organization that’s been trying to shut them down for years—which is exactly what publicizing the charges would have done. Why on Earth would they keep schtum about it? Why wouldn’t they have had reporters in the lobby to take perp-walk photos of Gini and Bill on tomorrow’s front page? Moreover, why was Nora allowed to stay in the clinic to pack up her things in the middle of preparations for a freaking press conference? And why in God’s name—which she invokes with tedious predictability and a complete lack of nuance; every second of screentime spent on evangelical characters is pointless on the vast majority of TV shows, which rarely bother even trying to make them interesting—didn’t she press charges when the defendant in a case for which she is the star witness brained her with a box full of files, leaving her sprawled on the office floor amid dozens of onlookers?

The case itself was a mess as well. It hinges on the idea that Bill paid Nora for her surrogacy work, which is tantamount to prostitution. Throughout the episode, this is presented as a he-said/she-said, with the police chief saying it’s for a court to decide and Bill speculating to Libby about getting Nora to confess that he was just paying her rent. But the key transaction took place on a live mic beaming directly to the undercover cop who arrested him, which means he already knew what had been said and why the money changed hands. Yet the arrest happened anyway, even as everyone insists it wouldn’t have had the truth been known. The truth was known! To viewers anyway; it’s not clear Ashford noticed the discrepancy at all.

It gets lazier still. When the Little Brown guy, as Betty calls him enough times for it to cease being remotely amusing, confronts her with the truth about Bill and Virginia’s absence from the office all day, he says “I just spoke with a friend of mine that works here in St. Louis at the police department.” That is the best they could come up with? I get that Ashford needed Little Brown Guy to find out Because Drama, but shit, Nora had been hanging around all goddamn afternoon—having her narc to the publicist would have filled two plot holes at once. Concocting an unseen friend in the STLPD? It’s like the show picked this out of a hat and took the rest of the day off. And why did Little Brown Guy get in touch with Cop Friend in the middle of all this chaos? And why did Cop Friend not alert Little Brown Guy to the preexisting child-abuse allegations before now? Had they not been on speaking terms, but Little Brown Guy thought he’d try to bury the hatchet now that he’s in town? So many questions, so few answers!

But there’s a bigger problem here, the biggest one Masters of Sex Season Three faced and failed to surmount: None of this matters, because none of it happened. It is indeed possible to make historical fiction that dances between the raindrops of reality while still traveling in the direction of the storm: Boardwalk Empire deftly incorporated real gangland figures into the story of its imaginary or heavily fictionalized ones, and wound up become a story about why the latter never amounted to anything while the former became famous. The Americans mostly avoids actual people except in TV soundbites, but still maintains the basic battlefield arrangement of the Cold War in the Reagan Era, using its foregone conclusions for dramatic effect.

By this point, however, Masters has proven it can’t handle historicity. No matter the liberties taken with the particulars of their lives, Bill Masters, Libby Masters, and Virginia Johnson were real people. The broad strokes of their personal lives, when they met and how they lived and when they got married and when they got divorced, are all known to us. The specific and tangible nature and impact of Masters & Johnson’s work on human sexuality is known to us in great detail. So unless the show is suddenly going to become alternate-history science fiction, we know Bill and Virginia get together. We know he was never arrested, much less publicly humiliated or legally convicted, for pandering or molestation. We know their publisher didn’t destroy their reputations out of pique. To suggest that any of that might come out differently is either to imply you’re willing to alter the timeline of society in a way that distorts rather than reveals, or to admit you’re openly wasting our time. I want a temporal refund. 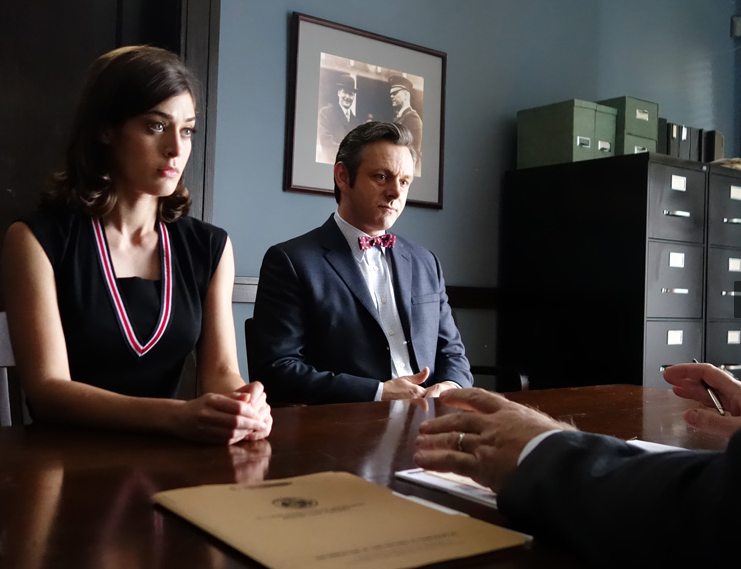