Maxwell L. Anderson, one of the most ambitious men in the art world, is coming back to New York City.

With former directorial positions at the Whitney Museum of American Art, the Indianapolis Museum of Art, and the Art Gallery of Ontario under his belt, Mr. Anderson is among the art world’s most high-profile leaders. He is stepping down from his current role as director of the Dallas Museum of Art to take up a new post as director of grant programs at the Geneva-based, Paris-headquartered non-profit, the New Cities Foundation.

“My growing interest in how cultural districts can shape cities led me to this new, exciting opportunity in New York City,” said Mr. Anderson in a statement on his new role. He described New Cities as “among the most innovative urban-focused enterprises in the world.”

Mr. Anderson’s tenure in Dallas was marked by some resignations there, but perhaps as many achievements. Attendance rose to 700,000 annual visitors with the reinstitution of free general admission. And the Islamic art expert also helped secure a 15-year loan of Islamic Art from the Keir Collection; considered one of the great private collections of its kind, it was assembled by Hungarian real estate developed Edmund de Unger. During his years in Indianapolis, he brought that institution significantly greater renown. His tenure at the Whitney, however, was marked by run-ins with the institution’s board.

In 2014, he worked alongside Dallas Mayor Mike Rawlings to bring the New Cities Summit (the Foundation’s annual forum on urban innovation) to Dallas.

Max will help develop ways of supporting NCF’S focus on urban innovation, with a particular emphasis on how digital platforms can improve the lives of city dwellers internationally. He will also assist the Foundation’s affiliate GCDN (the Global Cultural Districts Network) along with other endeavors to improve the quality of urban life through strategic investments, advocacy, and foundation alliances.

The DMA’s board president Walter Elcock will serve as the museum’s interim director, while board VP Catherine Rose will serve as interim president. A search committee to find the museums next director is being formed.

Meanwhile, we wouldn’t be surprised, a couple of years down the road, to see Mr. Anderson raise his hand for top museum openings in New York. 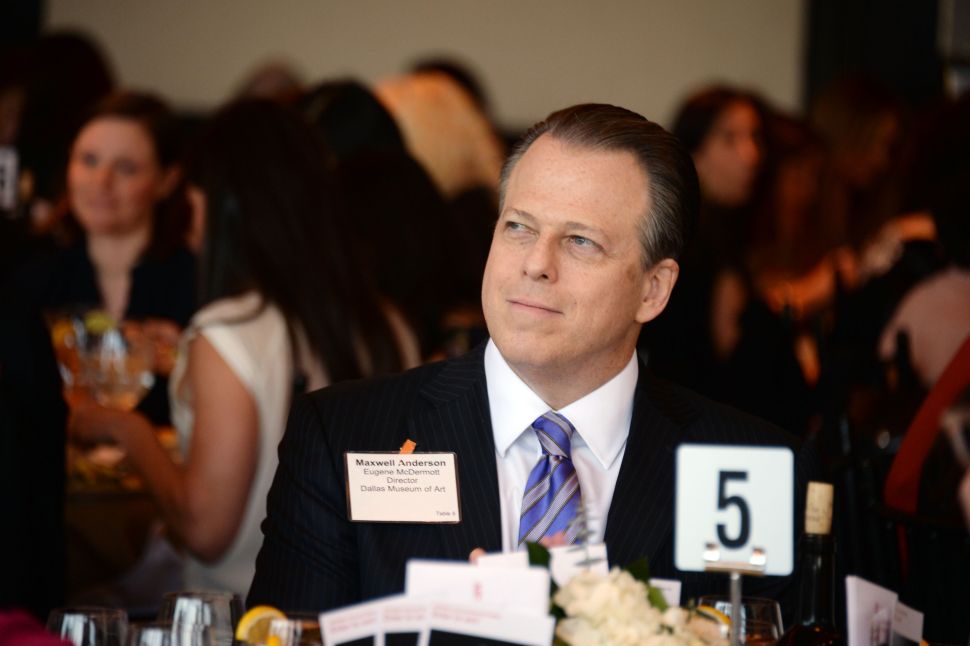