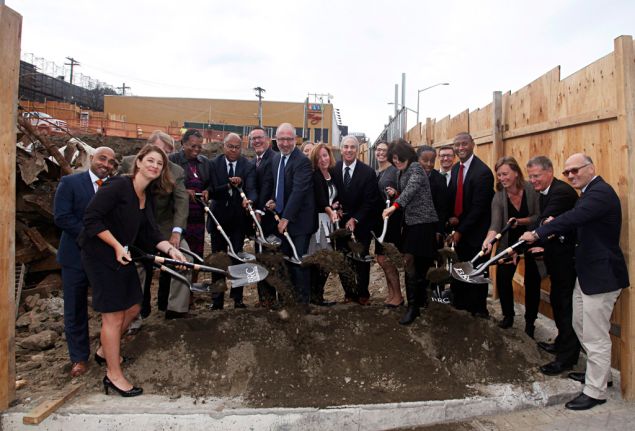 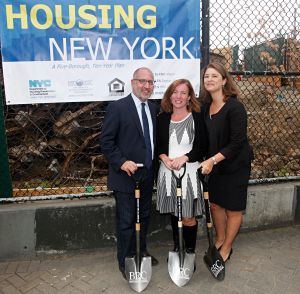 “This is a project that will put families back on their feet. HomeStretch is an innovative new program that addresses homelessness head-on and meets the needs of our most vulnerable New Yorkers for stable, long-term housing,” said Deputy Mayor Alicia Glen, who was joined by DHS Commissioner Gilbert Taylor, HDC President Gary Rodney, as well as the Bowery Residents’ Committee and partners for the ground-breaking.

Located at 233 Landing Road in the Bronx, the residences will offer 135 affordable housing units as well as a 200-bed transitional shelter for working, homeless single adults. Of the 135 affordable housing units, there are 111 studios for working, homeless single adults that are earning an annual income at or below $21,175, as well as seven one-bedroom units for households of two that have an annual income at or below $34,550, and 17 two-bedroom units for families of three that earn no more than $46,620 a year. One unit is set aside for the superintendent.

The Bronx site for the mixed-use housing development. (Larry Racioppo)

The shelter and permanent housing components of the building will have separate entrances and amenities, but the city claims that by co-existing on the same site, the development will provide a “physical pathway from homelessness to housing security.”

Since the mayor took office, the city’s homeless population—which had been increasing sharply for years—has continued to rise, and the mayor has been harshly criticized for his handling of the problem. Governor Cuomo has publicly said that the mayor should spend more city money to combat the city’s homelessness problem. While Mr. de Blasio has argued that it’s the media coverage of street homelessness rising, not the actual number of homeless people, he has recently said that there is “both a perception and a reality problem.”

In addition to housing at the residences, BRC’s Horizon Program will provide on-site social services that will include workforce development training, employee and housing retention services, and other services to assist in the transition from shelter-living to self-sufficiency.

The project will count toward the mayor’s goal of creating or preserving 200,000 affordable apartments throughout the city; the total development cost for Landing Road Residence is $62.78 million, financed in part through HPD, HDC, NYSERDA, and CPC.

The Landing Road Residence has a projected completion date of August 2017.