Hoping to circumvent the bickering between city and county that has marred their proposed payment in lieu of taxes program for Atlantic City casinos, Assemblyman Vince Mazzeo (D-2) and Senator Jim Whelan (D-2) today sent a public letter to County Executive Dennis Levinson and Mayor Don Guardian asking that the non-partisan Division of Local Government Services decide the percentage shares of casino payments for Atlantic City and its surrounding towns.

Arguing that the PILOT program is the last, best hope for stabilizing the property tax base in light of rampant casino tax appeals, the letter asks that politics be put aside for the sake of immediate action.

“We’re asking that all sides put aside politics and defer this decision to the state’s foremost experts on budgeting – the Division of Local Government Services,” said Whelan in a statement. “Taking the politics out of this is the only way an equitable agreement will be reached between all parties.”
The bill’s support broke down earlier this year when county Republicans discovered that the county’s agreed 13.5% share was not explicitly written into the bill. Assemblyman Chris Brown (R-2), who is running for reelection against Mazzeo this year, joined local Republican governors in their public request for a veto from Governor Christie.
“This legislation will do what we promised – stop the successful casino tax appeals that are bleeding our taxpayers and businesses dry across Atlantic County,” added Mazzeo.
“Residents have seen their tax bills without the enactment of the tax stabilization legislation, and it’s not pretty. Tax stabilization is around the corner and we all need to do everything we can to make sure the Governor signs it.” 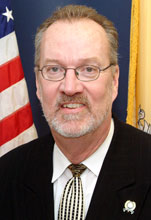