Some say that when searching for inspiration, you need only look up the sky. And with a 180-foot tall mural of the Pope painted on the side of a skyscraper debuting this week, perhaps the suggestion is no longer just a spiritual metaphor.

The giant mural, which depicts Pope Francis smiling and waving, is sprawled across the south façade of 494 Fifth Ave, visible from 34th street and Penn Plaza. Designed by artist and Catholic convert Van Hecht-Nielsen, 41, and commissioned by the Diocese of Brooklyn, the giant Pope Francis is a bold and bright sight to behold, even among the hustle and bustle of Midtown. The mural promotes the Pope’s arrival in New York City as part of his American tour on September 24, and the massive mass he will lead across the street at Madison Square Garden the following night.

At first, it seemed only a few passers busy New Yorkers caught sight of the giant Pope.

“To be honest, I didn’t even notice it,” said Kim Lee, 52, after the Observer drew her attention to the 180-foot-tall mural. “I’m not Catholic, so it doesn’t really do anything for me. But it doesn’t offend me either.” A solicited sampling of other pedestrians yielded similar responses.

Those who weren’t rushing from place to place, however, had taken notice of the large-scale rendering of the Pope Francis. One man was particularly impressed with the level of detail that went into painting the visage of his holiness.

“How professional,” said Martin, 43, before remarking on the daring of several men who were suspended high up in the air to make final touches to the Pope’s face. “I’m going to take a picture and send it to my mother.” He added the mural made him proud to be a Catholic.

Moments later, another man also stopped to photograph the mural and share it with his family. “I’m sending it to my wife and daughter,” said Geraldo, 44. “They’re in Mexico.”

Several nondenominational people found that they were moved by the giant Pope, too. ” I come out of Penn Station every day and you never see that sort of thing here, so it’s definitely inspirational,” said Dominic McGee, 24, who is not a Catholic. “I’m not religious altogether, but this guy is different.” 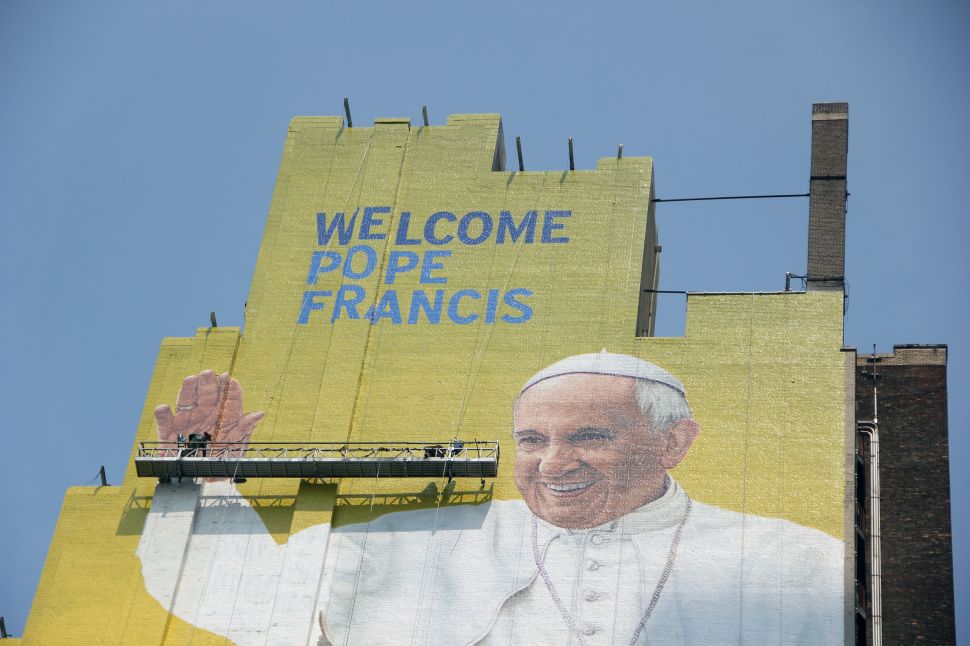