As we were discussing the Starz series Survivor’s Remorse, Executive Producer Mike O’Malley ordered me, “hang on, hang on, don’t go anywhere!” I’d really already used up my allotted amount of time, but I certainly wasn’t going anywhere. When he came back on the line, he said that he’d just told a big time exec at Starz that he’d have to call him back. (I have to say in that moment, I felt pretty important!)

For the uninitiated, O’Malley is an Emmy nominated actor who’s starred in too many roles to count, but is probably most known for his roles as Burt Hummel on Glee, or as Nicky Augustine on Justified, or for six years he played Jimmy Hughes, one of the leads on the sitcom, Yes, Dear. For the last few years he’s spent more time behind the camera than in front of it, overseeing the Starz series.

O’Malley admits that acting is, “Well, it’s a lot more fun because you come in and work with cool people and you only worry about yourself. There’s a joy in acting that’s not present in writing, but there’s a gratification in writing and creating that you can’t necessarily find in acting.” He takes a moment and, in a very apropos manner, pulls out a sports analogy. “It’s like difference between playing the game and coaching the game. Coaching you’re living and dying with every moment. Playing you get to have fun.”

Even with all of the work, O’Malley confesses to loving what he’s doing and what he’s doing is making a very funny, interesting series. “I’ve been writing a long time and all that work has finally paid off and I just am amazed and so happy that I get to do this every day.”

Survivor’s Remorse follows the life of Cam Calloway a hard-working, young basketball star, a Boston native from a gritty neighborhood, who’s thrust into the limelight after signing a huge contract with a pro basketball team in Atlanta. Helping Cam navigate his meteoric rise is his cousin and confidant, Reggie Vaughn. With Reggie’s help, Cam confronts the challenges of balancing the needs of his family with the rewards and responsibilities generated by their newfound wealth and fame. Cam, Reggie, and the unforgettable group of characters in the Calloway clan, which include Cam’s mother Cassie, sister M-Chuck and his uncle Julius, wrestle with the rewards and pitfalls of stardom, love and loyalty.

Joining O’Malley in this venture is an actual professional ballplayer – LeBron James. James, along with his business partner Maverick Jones, produce the series under the banner of James’ SpringHill Entertainment company.

Discussing LeBron’s actual involvement in the series, O’Malley says, “He’s just too busy to be involved on a daily basis but he does review and approve the stories we’re telling. He’s a TV fan and he has an awareness that we’re trying to tell stories about this family in a unique way. He relates to this family who love each other but who struggle to do right and how their humanity often gets in the way of their own happiness.”

O’Malley admits to being extremely impressed with LeBron, but maybe not for the reasons one might assume. “Sure, he’s an awesome player and a big NBA star and all that, but what I’ve found is that I’m staggered by the way he conducts his life. He leads with his heart, meaning he absolutely dedicates himself to excellence both on the court and off. I mean, the guy just pledged something like 87 million to send 2000 kids through college for God’s sake. Talk about dropping the mic and saying, ‘I really do care about where I came from and I want to give a hand to people who need help.’ When you meet guys who have the ability to transform things and then do it you kind of stand in awe. So I am absolutely in awe of him way more as individual than as a great basketball player.”

While Survivor’s Remorse has a sports theme and an athlete at the center of the series, what it’s really about is relationships, explains O’Malley. “This is about how this family is dealing with being in the spotlight, having money, and how that money changes them. They end up in situations that they’re not prepared for and that’s part is really universal no matter what your income level, right? We’ve all had that happen and what’s fun is watching how this family navigates these things, individually and as a unit.”

For a comedy, the series tackles some pretty serious issues, including race, religion, and domestic violence, all with just the right blend of seriousness, wit and humor. “In America today there is no topic that can’t be on the front page of the internet,” explains O’Malley. “What subject matter is not on everyone’s radar? We’re not trying to be ‘edgy’ or anything like that, it just seems like in this day and age the only place that you can have an honest discussion about any given topic is between two characters, so that’s what we do.”

The cast of Survivor’s Remorse is primarily African-American while O’Malley is Caucasian, a factor that has absolutely no bearing on the creation and execution of the series, insists O’Malley. “I understand the people might wonder about it, but why? Why do we even need to, you know, examine it or even talk about it? Diversity in all facets of creating anything is important and there shouldn’t be any, like, categories or anything like that. I’m just writing about human beings and we’re all human beings, right? I don’t know what to tell people about this – if you don’t want to watch the show because of skin color – you’re white and their black or you’re black and you think that I’m just this white guy writing this it isn’t real or something — then don’t watch. It’s as simple as that, but I can tell you this, we certainly don’t think about any of that when we’re making it. We just go to work and work really hard to make the best show we can.  People will decide if this if for them or not for them.  We’re just trying to tell stories that will make you think about things, and laugh a lot at the same time.”

Teasing what’s to come this season, O’Malley reveals, “I’m excited to continue to explore Reggie’s aspirations to go and do other things. I’m also excited about Cam’s journey as he tries to find someone romantically to share his life with. He stumbles through the casual encounter world and ends up with a circumstance that he regrets. M-Chuck will also have some romance, but unfortunately she really does have some anger issues that she needs to work through, so we’ll be exploring that. We’re also going to be looking at Cassie’s wanting to be desired as a woman and not wanted for her access to Cam. When someone becomes famous there are all of these people who want to get close to the family just to get access to the famous person, but Cassie finds someone who’s interested in her and who has no need for Cam’s money and that gets really interesting.  As for Uncle Julius – he’s just going to ‘keep on keepin’ on.’ The thing I love about him is that everything that happens just rolls off his back. That’s just the way he is. I really believe that if things changed for some reason and that family end up back where they came from he would just be happy if they were all healthy and together.”

Given the chance to say anything at all about Survivor’s Remorse, O’Malley chooses to praise his cast, saying, “These actors are ridiculously talented. They’re so bold and I love that. You can write great stuff but if you don’t have the right people to make it work on screen it just sounds like crap. What I love about this group is that they all care so much about making something that feels original, but yet absolutely believable and true. They really give it their all and if you watch even just a few minutes of the show you can see that.”

He laughs a little and says, “But really please, don’t just watch a few minutes, watch all of the show. Really, please do it.”

This statement is part of O’Malley blatant plan to bring more viewers to the series, “Look, we launched in the middle of fall when like a gazillion new shows are on. And, we’re on a pay channel so people can’t just flip by and discover the show, so we have to spread the word any way we can. I have to tell you that it was really fun right as the second season started to see people tweeting that they were so excited that the show was coming back. I saw some other people responding like, ‘what is this show’ and then other people saying, ‘Survivor’s Remorse is great! You have to watch it!’ I think when people see that there are other people are watching something it peaks their curiosity and I hope more people will decide to come and check it out. It’s like people saying, ‘oh you have to read this book or you have to hear this song.’ When someone recommends it then you’ll give it chance. That’s my hope anyway and if that happens then we’ll be making this show for awhile.”

When he cut off that Starz executive to continue talking to me, he joked that maybe that was the call telling him that the series had been renewed for a third season. When he said that, I insisted that he end it with me and call The Exec back immediately. We wrapped quickly and I’m sure that Mr. O’Malley made the call right away. And, it appears that he was right – it was just announced that Survivor’s Remorse has been picked up for another run of original episodes.

It looks like Mr. O’Malley won’t be in front of the camera too much anytime soon, and in this case, that’s a good thing. 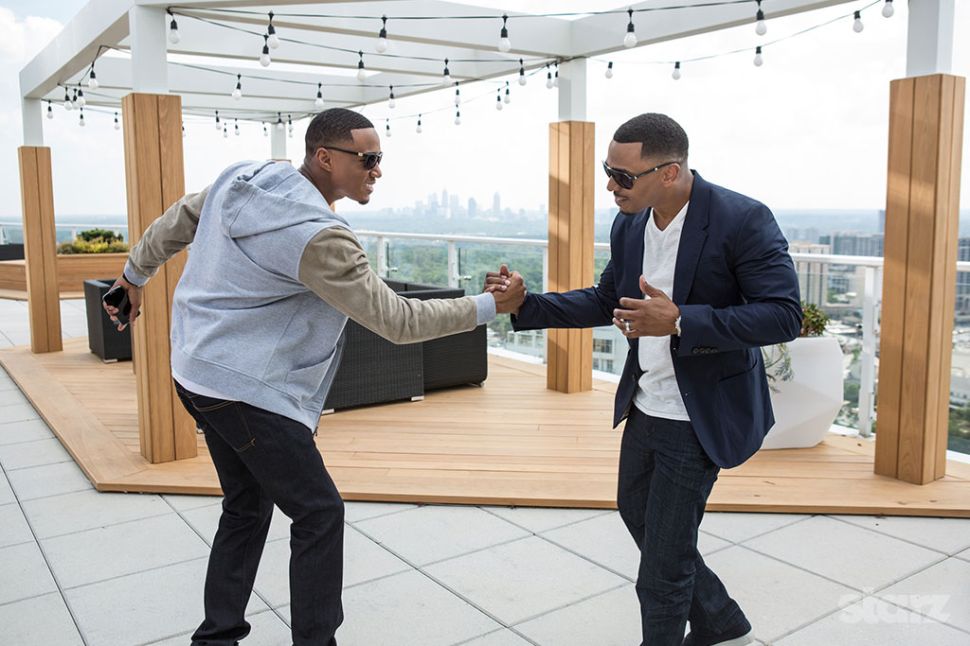