The sale of a unsigned oil painting at a New Jersey auction house has art history buffs and collectors over the moon.

A portrait of three figures that was originally believed to be a 19th century copy in the Old Master style, may in fact be the real thing: an early 17th century painting by Rembrandt, reports The Art Newspaper.

The painting, titled Triple Portrait with Lady Fainting, shows two men tending a woman who has fainted with smelling salts. It came to Bloomfield, N.J.-based auctioneer Nye & Co. via a first-time consignor who was looking to sell works inherited from his family.

In a condition report on the auctioneer’s website, the painting is described as “Continental School, 19thC., Appears unsigned” with “Paint loss, some restoration to paint, wood cracks.”

The work’s original estimate was between $500 and $800, with bidding on the work starting at $250 and quickly skyrocketing to an unexpected total. When the hammer finally came down, after heated bidding from two parties, the work fetched a whopping $870,000, which comes to $1.1 million after the buyer’s premium. An unidentified European telephone bidder was the buyer.

But before you go through grandma’s attic, let us assure you that this is a rare circumstance. “It is very common for painting specialists to tell owners these are 19th century copies of old master paintings, but rare to find a true old master painting,” John Nye, director of the auction house, told the Observer.

When evaluating the work for the sale, the fact that the work was painted on board, the depiction of clothing on the figures, and its historic subject matter, led specialists to believe it was a 19th century copy.

However, after the sale, the underbidder came forward and claimed that the work may actually have been painted by a teenage Rembrandt, and part of his early ca. 1625 series of allegorical interpretations of the five senses, with this picture being the representation of “smell.”

“When one compares the figures to those in the other [Rembrandt] pictures, it is pretty clear this is the missing image, but it takes someone who is a true student of Rembrandt,” said. Mr. Nye.

But only the winning bidder and the underbidder seemed to be clued in beforehand on the possible Rembrandt’s possible provenance.

“In many instances, people who are interested in things in our auctions let on that certain lots are going to do particularly well,” Mr. Nye explained. “We get that clue based on the number of people who ask for condition reports or detailed images.”

But Tuesday’s auction block success was a happy surprise. “There were no fireworks ahead of time, no indication it would be a strong seller. Whoever knew kept that info tight lipped,” he said.

Art historian Bendor Grosvenor also kept close tabs on the auction, and was given a tip about the painting’s true author from one of his blog readers. He posted a screenshot of the sale, and wrote:

“$870,000 (or close to $1 million with premium) is cheap for an early Rembrandt. It’s a little expensive for an early Dou. Judging by the head of the figure in a red hat, I’d say the former is a better bet. If you bought it, good spot—and good luck!” 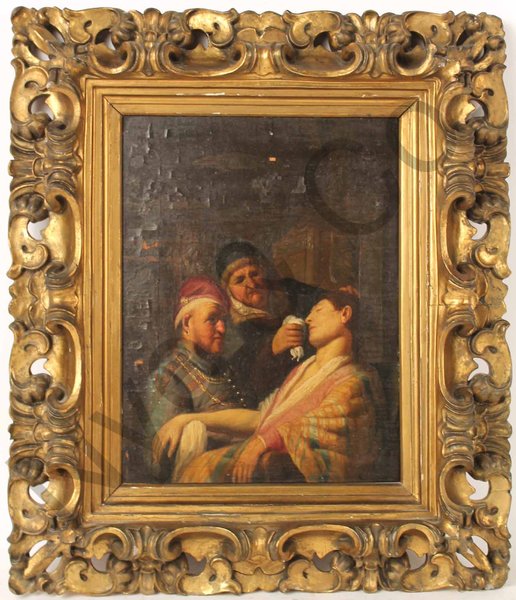