Four episodes in, and the show has started to feel like a very competent adaptation of a Wikipedia page. Lots of narration with an emphasis on timelines that has the overall effect of forging interest in the real story more than getting us to feel anything for the characters. But hey, some pretty crazy stuff went down in the Escobar years, and I’d rather it be read to me in a sedate American drawl than have to look it up myself. Here are some bullet points from Episodes 2 – 5.

To say that Colombia’s cocaine business was thriving would be to deny ourselves some much better blow-related puns. It was yacked out. It was tweaked. The coke business was coked out of its mind. To deal with the insane demand, Escobar opened a bunch of city-sized super labs where 10,000 kilos of coke were produced every week — bringing in $5 billion a year. No longer able to transport the drugs into the US through more conventional methods (private planes, the bellies of pregnant women), Escobar had chemists flown in from Germany to liquify the cocaine and smuggle it into beverages.

Soon, Escobar’s biggest problem was that he had TOO much money. So he started a taxi company to launder some of it, ostensibly pulling in $5 million a week with three cars. His next strategy was to bury the cash — so much of it that he hired an accountant named Blackbeard to keep track of all the hiding places. All this money meant that Pablo wielded an immense amount of control in Colombia, which is what you’d expect from a guy with an accountant called Blackbeard.

Agent Murphy and his wife get a taste of this power as soon as they land in Bogota, having just moved from Miami. They’re held at the airport by a government employee with an unreal mullet who’s refusing to let their cat, Puff, into the country. Which, to be honest, seems like a reasonable punishment for naming a cat “Puff.”
Unjust, however, is when Escobar’s goons hang the feline as a warning to Murphy at the end of Episode 2. It’s not like the thing was named “Pookie” or “Whiskers.”

But all that power couldn’t make Pablo president

He gets pretty close, though. Pablo starts an affair with a journalist named Valeria Velez, and she helps him launch a campaign as the secondary leader of the New Liberal party. Velez dubs Pablo “the Robin Hood of the poor,” which is both accurate and inaccurate as Escobar does give money away to the masses, yet prances through the forest in tights zero times. Also, isn’t Robin Hood already the Robin Hood of the poor? I’d be much more interested in a character called the “Robin Hood of the rich,” who would probably be played by Aaron Eckhart. Initially, no one is able to prove Escobar’s drug connection and he becomes a real populist hero, finagling his way into Congress.

And them boom!, Escobar’s dreams suddenly explode like a balloon full of cocaine inside an expecting mother’s stomach. Murphy’s able to dig up a mugshot from an early drug trafficking arrest and Pablo is ceremoniously expelled from office. If you imagine a ruthless billionaire with access to an infinite supply of cocaine would take such an event lightly, you are wrong and also, why would you think that? Pablo goes on a furious rampage that includes the murder of a public official. Goodbye, Pablo the politician, hello Escobar the guy everyone now knows is a drug kingpin.

If you were worried that a show set in the South American jungle wouldn’t have any sexy comrade characters, do not fear, for  M-19 is here. This group of young idealists stole the sword of Simon Bolivar and used it to kidnap the daughter of a drug kingpin. In fact, they want to kidnap all the drug kingpins. But that doesn’t happen as Escobar ends up enlisting M-19 for his own purposes and then murdering the majority of them. Cool sword, though.

A big moment for the DEA comes when Murphy’s partner, Javier Pena, receives a tip from his prostitute friend that a bunch of girls are being sent to Medellin. (If the prostitute looks familiar it’s because she’s played by the same actress who gave us Emily, Taylor Kitsch’s long-suffering girlfriend on “True Detective.” Aren’t there any decent roles out there for a devastatingly sexy Latina woman?) The DEA looks into it and discovers that something very, very big is happening in the city — summer camp for drug dealers! Or, the formation of the Medellin Cartel.

I say this because Agent Pena, is played Pedro Pascal, the very same actor. How dope would it be if Oberyn came prancing up to the Escobar compound with a sword and a vendetta? And how much ass would the Sand Snakes kick? Actually, they’d probably be communists, which doesn’t sound like a half-bad plotline, either.

Puff the cat and a German Shepherd Luis Guzman’s character shoots for no apparent reason. 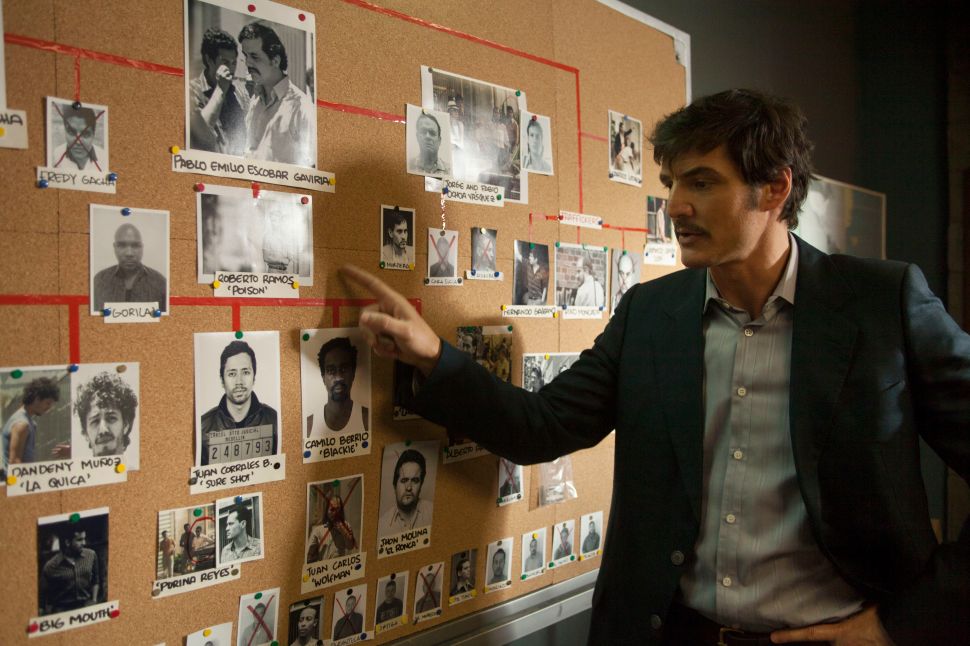