Dust off your glass tables, roll up your dollar bills, and put away the molly you’re probably already doing — for a new show about cocaine has come to Netflix! Narcos chronicles the rise and fall of Pablo Escobar, the notorious Colombian drug lord also known, at least according to my friend Kevin, as “that guy Vince made a movie about on Entourage, right?”

Whatever you end up thinking about Narcos, you can’t say it suffers from lack of plot. The season ends with a ramp-up of stakes and violence, plus some more hookers thrown in for good measure. Here are some bullet points from the final three episodes.

All the journalists in Colombia are attractive women

As the eighth episode begins, Escobar has kidnapped Diana Turbay, a journalist who also happens to be the daughter of a former Colombian president. He’s been forcing Diana to negotiate with the current president via recorded videos, and this brings tensions inside the country to an all-time high. So the ever-fervent Colonel Carrillo stages a mission to rescue Diana… but ends up accidentally shooting and killing her. Are people still using the term FML? A very hangdog colonel wants to know.

In other foxy lady journalist news, Valeria Valez (played, incidentally, by Stephanie Sigman who has just been announced as the new Bond girl) betrays Escobar by revealing his family’s location to Pancho Herrera. Pancho’s the leader of the Cali Cartel, which is the Medellin Cartel’s main frienemy. (Cali provided cocaine to New York while Escobar did Miami, and the two cartels were supposed to split LA. No word on who got Des Moines.) Feeling more enemy than friend, Pancho blows up the Escobar home. Everyone comes out relatively unharmed, although the attack leaves Pablo’s daughter permanently deaf in one ear.

Pablo is hit with a double-punch when Cousin Gustavo, his closest confidant, is captured by Colonel Carrillo. Gustavo refuses to give up Escobar, so Carrillo leaves him to be murdered by a group of angry citizens who have been affected by the cartel’s violence.

Escobar figures out the very best way to go to jail

If Orange Is the New Black makes prison look like summer camp (to me, summer camp was mostly about wearing ill-fitting neutrals and experimenting with girls), Narcos makes it look like the summer camp from the 1994 classic Camp Nowhere, starring Jonathan Jackson and Christopher Lloyd, about a group of kids who trick their parents into sending them to an adult-free 24-hour party zone. (Solid reference, guys!)

After reaching his breaking point with all the kidnappings and threats, President Gaviria finally strikes a deal with Escobar, and he pretty much gives in to all of the kingpin’s requests. Pablo agrees to turn himself in and serve time for drug trafficking under one condition: that he be allowed to build his very own jail and hire his very own guards to keep watch. The resulting “cathedral” is a very un-prisonlike structure where the men of the Medellin Cartel frolic with lobsters and prostitutes. There isn’t even any outside enforcement as part of the deal mandates that state police remain at least two miles from the jail. And all that’s missing is a giant slide.

There’s money in that there ground!

It was pointed out early in the season that Escobar was making so much money he had to bury some of it in various locations scattered throughout the area. Years and episodes later, three million of these dollars are accidentally dug up by a local worker — which seems like a pretty plausible potential outcome when you’ve been sticking cash in holes and forgetting about it. But Pablo Escobar is Pablo Escobar, and he accuses two of his guys of intentionally getting at that money. And then he viciously murders them.

Many things can be said of Escobar, but it’s probably a stretch to conclude that the man was a joy to work for.

In the end, Escobar escapes capture so he can do a second season

Netflix recently announced that there will be another round of Narcos, so naturally, the first season ends with a quite alive Escobar — albeit one who has considerably less power. In the finale, Escobar takes the Vice Minister of Justice hostage inside his place-prison, thus ensuring that the place will be raided by Colombian Special Forces. Agent Murphy is simultaneously kidnapped and threatened by the Cali Cartel. Pancho lets Murphy go in the hopes that the DEA and Colombia’s second most notorious cocaine cartel can work together, and Escobar manages to escape his prison through a series of underground tunnels that suddenly appear before him. Presumably because he’d collected enough gold rings in a game of Sonic the Hedgehog.

As the season closes, the Special Forces have effectively taken down most members of the Medellin Cartel, and Pablo has escaped into the woods with only a few of his men. Meanwhile, Murphy is free of his captors and has returned to his apartment to get to work recording all that droning voiceover for Season Two. 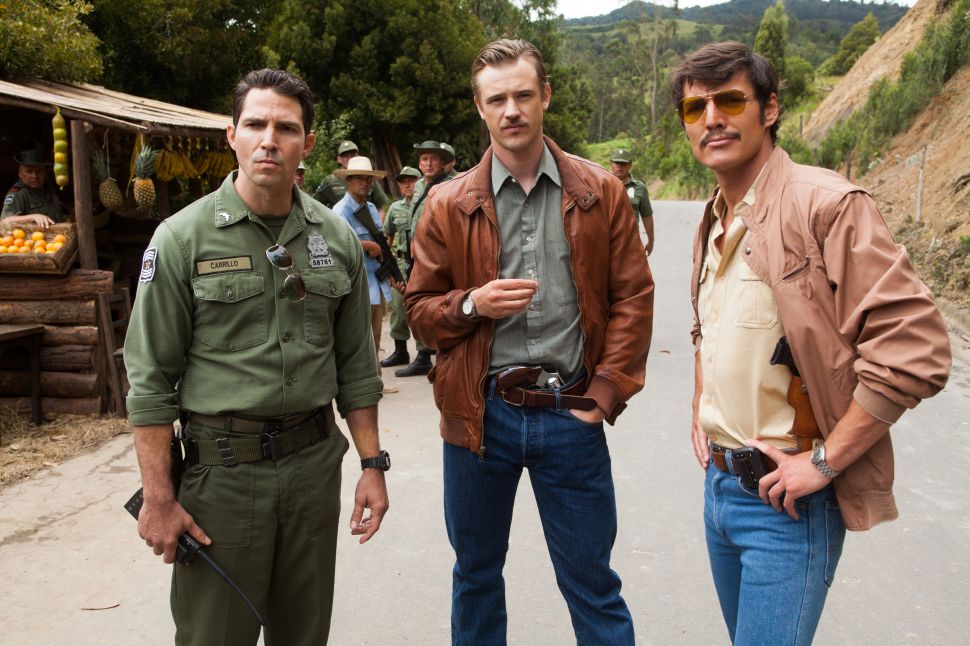