1. Congressman Hakeem Jeffries: Whether Mr. Jeffries actually runs for mayor in 2017 remains to be seen—but it’s always nice to be asked. And Mr. Jeffries is certainly being asked, most recently by former mayoral contender and comptroller Bill Thompson, according to a recent New York Times report. He has repeatedly assured reporters he is happy in Congress, but the attention he’s getting as the man who could potentially take down Mayor Bill de Blasio in a Democratic primary is only good for Mr. Jeffries, whose rising profile has already led to an Air Force One ride with President Barack Obama this summer. There’s no real downside to letting people float your name for mayor—especially this early in the game when considering running for mayor is essentially meaningless—and especially when a mayor is this unpopular.

2. Council Speaker Melissa Mark-Viverito: Ms. Mark-Viverito can add her name to the long list of people who have endorsed Hillary Clinton for president before Mr. de Blasio, who once ran Ms. Clinton’s Senate campaign. The speaker timed it right, just ahead of a visit from Ms. Clinton to Ms. Mark-Viverito’s native Puerto Rico, which is grappling to deal with a financial crisis that has left the island unable to pay its debts. Ms. Mark-Viverito is left of the mayor on many issues, but while Mr. de Blasio is still awaiting some long-sought progressive vision from his former boss, the speaker made a pragmatic call to get behind the front-runner and push her to help Puerto Rico—earning Ms. Mark-Viverito plenty of media attention as a “key” and “high-profile” Puerto Rican politician, and helping grow her reputation outside New York as a major player in issues that matter to the Latino community.

3. The Republican National Committee: It’s too early to know who their nominee will be, but the RNC can rest easy about one thing, at least—whomever it is won’t have to face a third-party challenge from Donald Trump. The party’s front-runner and the only candidate who had previously refused to rule out an insurgent bid should he lose the nomination finally came to the table and signed the GOP’s loyalty pledge. If Mr. Trump wants to Make America Great Again, he’s going to have to do it as a Republican—and if he doesn’t win, he’s going to have to support whoever beats him, even if it’s that low-energy, Spanish-speaking Jeb Bush guy.

1. Bill de Blasio: Let’s amend a famous saying to make it a bit more modern: Never pick a fight with people who buy ink by the barrel, and are skilled in photoshopping your head onto homeless people, and are currently running an online countdown clock until, they hope, you’re voted out of office. And yet, Mr. de Blasio went and picked another fight with the New York Post, tweeting a mock front-page that read: Safest Summer in 20 Years, But We Still Hate de Blasio.” Ha? Sure, it’s true: the Post hates the mayor and it will always hate the mayor. Even if the mayor lit fire to a copy of the Daily News, the Post would still hate him. They are not pretending they don’t hate him. What good does it do the mayor to point this out? It riles up the Post, and it reminds everybody about how they feel like crime is up, even though it’s really down. It’s a failing of the mayor’s—whether it’s his inability to convey his successes, or the growing sense of disorder on streets—and sure, the Post is fueling it, but Mr. de Blasio’s tweet just adds more wood to the fire.

2. Police Commissioner Bill Bratton: As the Observer has noted before, Mr. Bratton gets away with a lot more than other commissioners who report to City Hall—and possesses an ability to undermine the mayor without consequences in part because of how skilled a politician Mr. Bratton is, and in part because Mr. de Blasio needs Mr. Bratton for his law-and-order bona fides. But this week an unforced error took attention away from what should have been a victory lap, and instead of touting record-low crime numbers, Mr. Bratton had to deal with questions about his support of the decades-old Moynihan Report on the disintegration of the black family. Mr. Bratton had called it “prescient” earlier in the week—and Mr. de Blasio quickly distanced himself, saying the report was “from another time.” It is not the first time the police commissioner’s plain-spoken manner has causes him trouble in discussing the nuanced issue of race—recall his remark that the department has a hard time hiring blacks because so many have been arrested—and yet again Mr. Bratton was forced to spend time insisting he is not racist.

3. Advocates for the homeless: Where to even begin? First, perhaps, with the departure of Deputy Mayor Lilliam Barrios-Paoli, a former nun who has worked on behalf of the poor and homeless for decades under multiple mayors. Advocates and council members were flabbergasted and depressed by her departure, which comes as the de Blasio administration struggles to get in front of a growing homelessness problem that the media has portrayed not as a failure of the city’s moral and ethical responsibility to help the down-and-out, but as a sign that the mayor has lost control of streets to vagrants and problem-makers. The city began breaking up homeless encampments this week, but it’s unclear whether any of the people they’ve roused will actually get the help they need. And it’s hard to imagine how the city is going to stem the tide—especially when funding for the supportive housing programs that keep people off the streets has become just another battleground in the ongoing feud between Mr. de Blasio and Gov. Andrew Cuomo.

With the Iran deal’s success assured in Washington—if you can call sustaining a presidential veto of a Republican-led disapproval motion a success, anyway—it will be interesting to see the fall-out for the decisions made by New York’s elected officials. Liberal group MoveOn has been savaging Sen. Charles Schumer for his opposition to the deal, and it remains to be seen how it will affect his assumed future as leader of the Senate Democrats. On the other end of the spectrum, Congressman Jerrold Nadler said this week he didn’t expect his support of the deal to spur such “viciousness” from pro-Israel politicians who have vowed to never forgive Mr. Nadler, a staunchly pro-Israel politician himself. That surprise seems a little naive—if anybody’s going to show up outside your office with a bus draped in sarcastic banners depicting the Iranian Ayatollah thanking you for your support, it’s going to be Assemblyman Dov Hikind—but it remains to be seen whether Mr. Nadler could face his first-in-ages challenge at the polls.

Mr. de Blasio, meanwhile, will have to continue to try to project control over the growing problem of homelessness, after pivoting away from prior rhetoric that sought to downplay the problem or argue that it was getting disproportionate media coverage. His frenemy-turned-enemy, Mr. Cuomo, is not making this any easier on him—saying this week the city has a “major” homeless problem and that Mr. de Blasio needs to spend more of his budget surplus on combating the scourge, while city officials argue the state won’t put enough units of supportive housing on the table to make it worth discussing. Sure, the population of homeless shelters grew most exponentially under Mayor Michael Bloomberg, but Mr. de Blasio has been mayor nearly two years now. He is reaching the point where he owns the problems—homelessness, disorder at Rikers Island, a foundering Hurricane Sandy recovery—that begun before his time in office.

Unsurprisingly, this one goes to the New York Post, with reporter Michael Gartland valiantly trying to work around the mayor’s silly declaration that he would only take on-topic questions at a press event Thursday. The mayor was discussing Legionnaires’; the Post, naturally, wanted to discuss the Post.

Here’s how it went down, courtesy a transcript from Mr. de Blasio’s office:

Question: As this Legionnaires’ situation was unfolding yesterday, whose idea was it to mock up a front page of the New York Post as a joke and put it out on Twitter?

Mayor: Totally different topic. We are not going to address that right now.

It was worth a shot—especially because the press is rightfully growing weary of the on-topic/off-topic divide which, to be fair, began under Michael Bloomberg.

In a desperate bid to boost his poll numbers across the city, Mr. de Blasio finally makes that presidential endorsement—and backs the most popular candidate, Donald Trump.

Mr. de Blasio will continue withholding his endorsement from Ms. Clinton, ahead of an presidential forum he plans to host and which she has little incentive to attend. 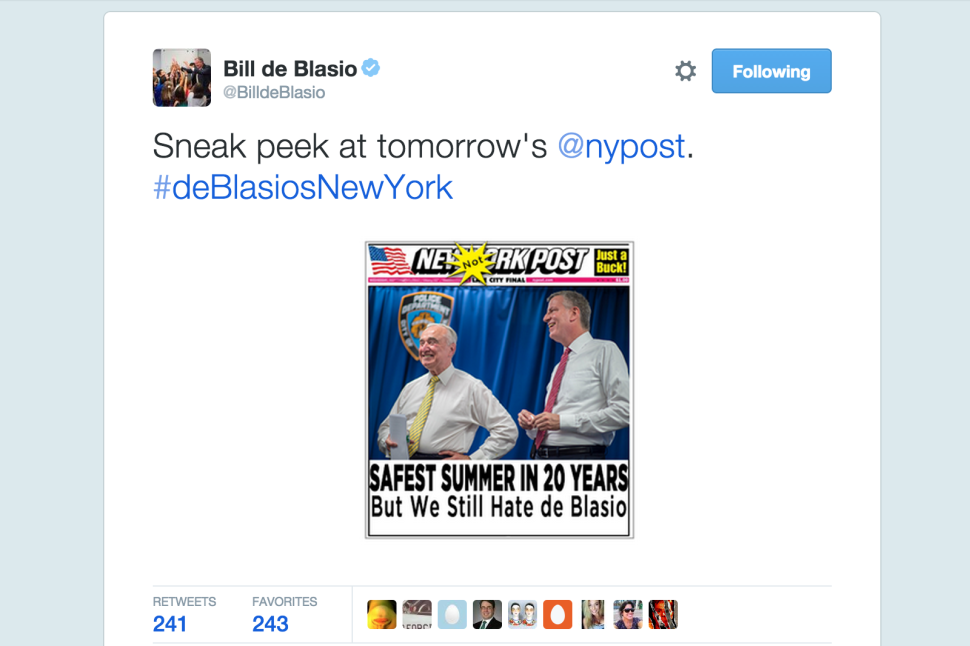