BRIDGETON – The Cumberland County Board of Chosen Freeholders met Tuesday night and saw a packed crowd of supporters and critics for the board’s recent recommendation that the legislature consider taking action on a measure to offer undocumented immigrants a separate class of driver’s licenses. Though the crowd was dense enough to keep many outside the perimeter of the meeting room, neither side brought forward a motion to reconsider the issue.

Assemblyman Sam Fiocchi (R-1) was at the meeting, and his running mate in his campaign for reelection Freeholder Jim Sauro was present on the board. The Fiocchi-Sauro campaign had encouraged people to turn out to the meeting to keep the driver’s license issue alive, with Sauro saying in a release that he opposes the decision on principle.

“This will only incentivize more undocumented workers to pour over our borders in violation of our laws,” said Sauro. “Passing this resolution effectively puts up a ‘Welcome’ sign for illegal immigrants in Cumberland County.”

Fiocchi and Sauro’s opponents Assemblyman Bob Anderzejczak (D-1) and Bruce Land also voiced their continued opposition to the decision in a statement beforehand, though neither they nor Senator Jeff Van Drew (D-1) were at the Cumberland County Administration Building on Tuesday night.

“We hope the Cumberland County Freeholders will vote to rescind their resolution. New Jersey state-issued drivers’ licenses must be reserved only for those who have legal status to hold them,” said Anderzejczak and Land in a statement.

The board voted to approve the recommendation late last month, with Sauro being the sole dissenting vote. Freeholder Tom Sheppard said that he was not surprised by the turnout, but by members of the crowd’s reticence to speak on the controversial driver’s license decision.

A large crowd of Spanish-speaking residents were gathered outside, where they remained for duration of the meeting. Fiocchi himself was stuck outside the meeting room past security guards and a metal detector.

One member of the crowd who works for the county and wished not to be identified said that he has heard rumors that the board has started holding its monthly meetings at the administration building rather than the more spacious Cumberland County Courthouse down the street due to budget cuts.

The board had argued during the vote on the bill that the revenue generated by permitting the licenses would top $5 million, a significant sum for a county that shares in southernmost Jersey’s hard-pressed economy and suffers some of the worst unemployment in the country. 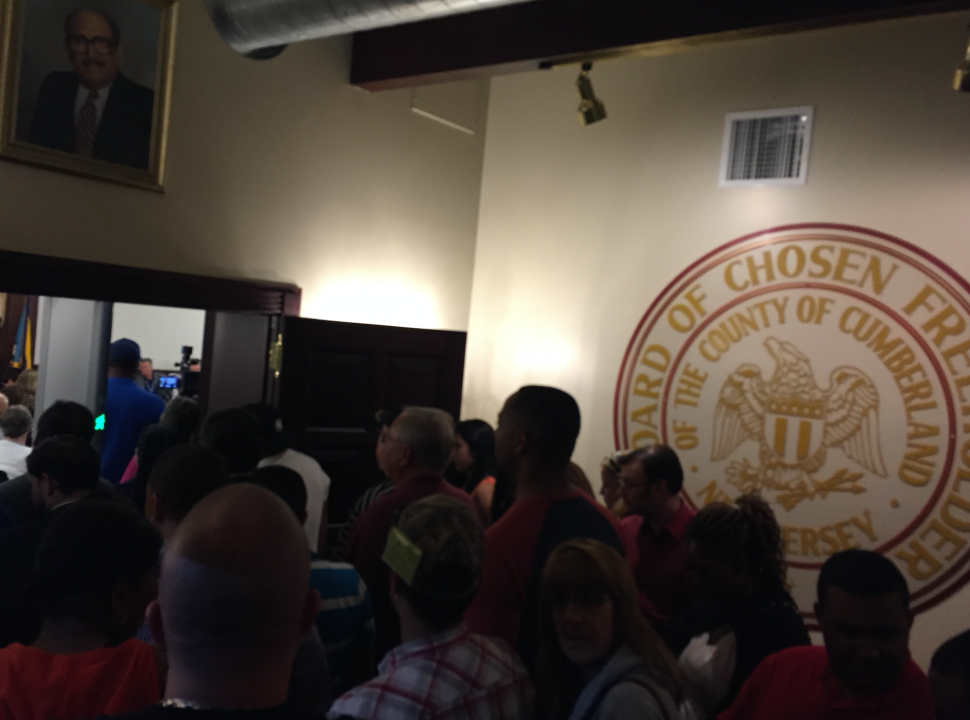