As security officials in New York City prepare for next week’s visit from Pope Francis and the convening of the United Nations General Assembly, Police Commissioner Bill Bratton said the dual events will pose “the largest security challenge the department and the city will ever face.”

Just as Pope Francis makes his highly anticipated first visit to the United States, with multiple events in the city, New York will also host some 170 world leaders who are set to attend the 70th anniversary of the United Nations General Assembly next week.

“That’s 90 percent of the world leaders in the city at one time,” Mr. Bratton noted today during a media briefing on security measures for the visit.

But Mayor Bill de Blasio said the NYPD—and partners including the FBI and Secret Service—were ready.

“This police force has seen it all and is ready for it all,” Mr. de Blasio said today.

Mr. de Blasio said the department will deploy “thousands and thousands of officers” to keep the pope, other world leaders, and everyday New Yorkers safe next week. The city will also deploy “tremendously effective surveillance technology” and more old-fashioned measures, like K-9 units. There will be some street closures, but Mr. de Blasio said he thought New Yorkers would be willing to put up with the hassle that comes from being a world capital and hosting Pope Francis.

As if the U.N. General Assembly and the papal visit weren’t enough to juggle, Mr. Bratton also noted President Barack Obama will be in town to visit the United Nations, an event that garners plenty of security.

“Just to put a little entertainment on top of it, we have Beyonce entertaining 100,000 people in Central Park as the pope is leaving,” Mr. Bratton said.

Pope Francis will hold a number of public events during his stay in the city—a mass at Madison Square Garden, a visit to an East Harlem school, vespers at St. Patrick’s Cathedral, remarks at the United Nations, and a service at the World Trade Center memorial. The pope will also make his way through Central Park in a procession that will allow thousands of New Yorkers to see the Catholic leader—who has focused on reaching out to everyday people and the poor—but will also present significant security challenges.

“Central Park is more challenging in the sense of the scope and scale,” Mr. Bratton told the Observer during the press conference, but noted that it is a ticketed event—which allows the city and its security partners to control who can enter the perimeter. “I think we’ll be fine. All of these events are challenging, let’s face it, that’s the reality of it.”

Among the challenges facing security officials will be balancing Pope Francis’ desire to interact with people with the city’s desire to keep him safe. “We are very comfortable that we are going to be able to meet both sets of needs,” Mr. Bratton assured.

One reporter asked whether there was any chance Pope Francis might trade in his popemobile for a MetroCard and take the subway with everyday New Yorkers.

“And if he does, he better pay the fare,” Mr. Bratton added. “We have strong laws against fare evasion here.”

The briefing came after an hours long “table top” exercise—in which various agencies including the NYPD, the FBI and the Secret Service—ran mock drills to prepare for a number of emergencies that could occur during the pope’s visit to the city, when security resources are suspected to be stretched thin. Among the situations drilled for were a building collapse, an active shooter, bombings at various buildings, and a power outage at a hospital.

This weekend, Texas Congressman Michael McCaul, the chairman of the House Homeland Security Committee, told ABC News that one security threat to the pope had already been “disrupted” ahead of the pontiff’s visit.

Mr. de Blasio has often spoken highly of the pope, who has called for the Catholic church to focus on issues like income inequality, helping the poor, protecting the environment from climate change, and other issues that align with Mr. de Blasio’s progressive agenda. Mr. de Blasio said it was a proud moment for him to be a New Yorker.

“His Holiness has become, I would argue, the single strongest voice of conscience anywhere in the world—someone that people of all backgrounds look to for leadership,” Mr. de Blasio said. 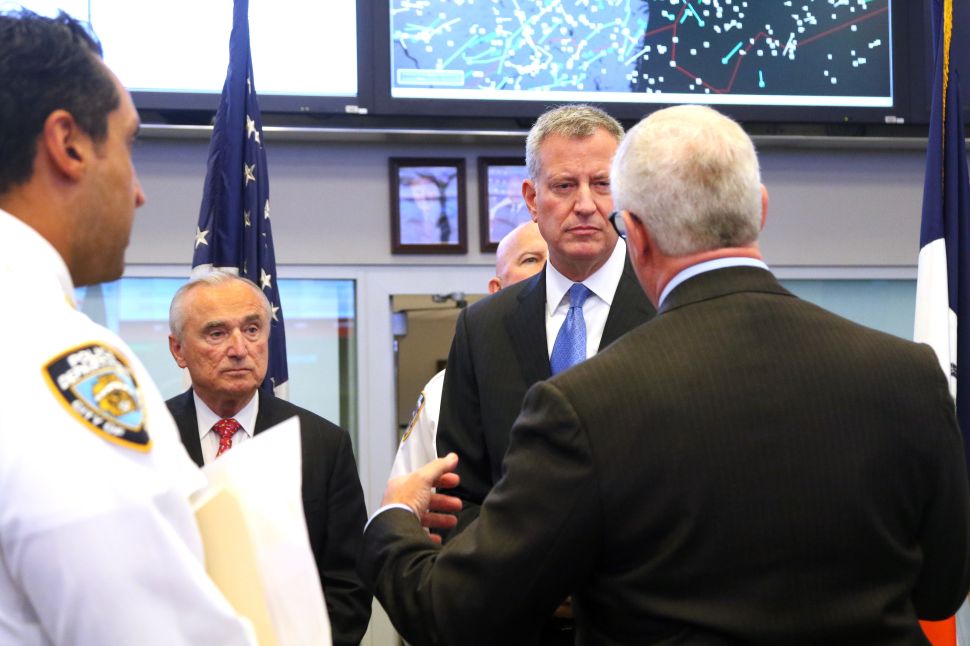