It’s happening again. A White House fumbling with the violent mess of Iraq finds itself surrounded by mounting accusations that it’s played dirty games with intelligence. A Pentagon facing charges that its analysts have skewed assessments on Iraq to tell top policymakers what they want to hear, rather than what is really happening in that troubled country.

If this sounds terribly familiar, it should. Only a dozen years after the George W. Bush White House was buffeted by allegations that it had “cherry-picked” intelligence to justify its 2003 invasion of Iraq, Barack Obama is facing similar accusations. Intelligence Community analysts alleged that, in the run-up to Operation Iraqi Freedom, they were pressured to exaggerate Saddam’s weapons of mass destruction. Now, analysts claim that they have been pushed to present Obama’s war against the Islamic State as more successful than it really is.

Only the most optimistic Obama backers still portray that year-long air campaign (its proper name is Operation Inherent Resolve) as adequate, and most security experts agree that the Islamic State is winning the war on the ground, thanks in part to an American-led air war that is bombing too little and too cautiously. There is no indication that Western airpower is anywhere near inflicting decisive pain on the Islamic State, while our Iraqi partners, who serve as the ground anvil for the U.S. airborne hammer, increasingly feel left in the lurch by Obama.

The air campaign is led by the Pentagon’s Central Command, which is headquartered in Tampa, Florida, half a world away from its foes. Rumors have swirled for months of low morale at CENTCOM, as the Pentagon calls it, as Operation Inherent Resolve drags on without a coherent strategy. Stories of White House interference with CENTCOM headquarters, commonly heard in the military, paint a disturbing picture, with Susan Rice’s bloated and confused National Security Council waging war against the Islamic State in a micro-managerial style reminiscent of President Johnson’s failed efforts against North Vietnam a half-century ago.

Worse, rumors have mounted for months that CENTCOM’s intelligence staff has been pressured to promote “good news” about the struggle against the Islamic State, despite much evidence to the contrary. Such rumors can now be verified.

The story first hit the press in late August, with reports that CENTCOM intelligence analysts had complained about political pressure being applied by military bosses to skew Iraq assessments. Enough analysts had stepped forward to file complaints that the Pentagon’s inspector general got involved to determine what was going on down in Tampa.

A bit of explanation on how Pentagon intelligence works helps clarify the situation. CENTCOM, like all nine of the Defense Department’s combatant commands, has its own intelligence outfit, known as the J2, under a one- or two-star general or admiral, with many analysts on staff. Some are military personnel on rotation while others are civilians – many are from the Defense Intelligence Agency—there for a few years, in some cases forever.

The CENTCOM J2 is charged with producing intelligence assessments of their area of responsibility, in this case the Middle East. For the last year that job has focused heavily on the Islamic State and supporting Operation Inherent Resolve.

CENTCOM’s intelligence staff has operated under a cloud for years, in part due to flawed Iraq assessments back in 2003, and partly because Tampa’s tropical climate and lower cost of living than Washington, DC, have attracted analysts who aren’t on the Pentagon fast track and—not to put too fine a point on it—may not want to work too hard.

The situation is serious. The term “mass uprising” has been heard in espionage circles and we now know that more than fifty analysts in Tampa, a high percentage of those assessing the Islamic State, have blown the whistle on politically skewed analysis.

Recent reports paint a disturbing picture of a badly distorted intelligence process at CENTCOM headquarters, with senior officers directly pressuring analysts to change their assessments to fit the administration’s optimistic take on the war against the Islamic State. Senior military officers like to toe the official line—you get promoted for “speaking truth to power” in the movies, not in the U.S. military—and clashes with intelligence analysts, especially when they are civilians, are commonplace.

Yet what’s been going on in Tampa far exceeds that, with the term “Stalinist” being used by whistleblowers to describe the command climate there. Since March 2013 CENTCOM has been headed by General Lloyd Austin, an Army four-star who’s widely regarded as an uninspired political animal eager to curry favor with the White House.

Direct pressure on analysts has been coming from the command’s chief intelligence officer, Army Major General Steve Grove, who’s been there since late 2013. Whistleblower complaints point to Grove as the main culprit behind CENTCOM’s intelligence problems, specifically the systematic distorting of assessments regarding the Islamic State.

While it’s tempting to think that General Austin, who is known in the military as a “toxic leader” (many say the same about Grove), has been leaning on his subordinate to “get results” from his analysts, the problem looks more serious than that. Reports that James Clapper, the Director of National Intelligence, talks to Major General Grove almost daily raise troubling questions.

Manipulating intelligence analysis is hardly a new problem inside the Beltway.

Clapper is a very busy man charged with running America’s vast seventeen-agency Intelligence Community. That he makes time practically every day to talk to the CENTCOM intelligence director is, to be charitable, highly unusual. To any longtime spy, this smacks of political interference from the White House and President Obama.

The Pentagon’s inspector general now has to untangle this mess.

I headed a multiagency intelligence task force focused on Iraq back in 2002-2003, and the interference from the Bush White House then did not reach the level of daily calls to CENTCOM spies. What’s been going on in Tampa recently has the appearance of being even worse. Given the role that Bush’s mishandling of Iraq, including the intelligence scandal about WMDs, played in his administration’s troubles, it’s painfully ironic that Obama may have gone down a similar road.

Manipulating intelligence analysis is hardly a new problem inside the Beltway. A better analogy for the current scandal may not be Iraq 2003 but Vietnam 1967, when intelligence analysts who worked for the military painted a rosy picture of how America’s counterinsurgency in Vietnam was going. A nasty interagency spat ensued that left lasting bitterness in the Intelligence Community, not least because the enemy’s Tet Offensive of January 1968 showed that the pessimists had been right.

Let’s hope we don’t have to suffer a Tet-like setback at the hands of the Islamic State to illustrate how inaccurate, and politically skewed, CENTCOM intelligence has been. Today General Austin testified before the Senate’s armed services committee. It was not an inspiring performance, with Austin fumbling basic questions about the progress of Operation Inherent Resolve.

General Austin’s shambolic testimony was a debacle that raises troubling questions about what’s going on in Tampa as well as in Iraq. He denied that he ordered intelligence assessments to be skewed, but the Senate’s lack of confidence in Austin means that this scandal is far from over. The Senate’s intelligence committee is interested in unraveling the messy CENTCOM spy story as well. Obama’s Iraq intelligence problems may only be beginning.

This is the debut of a new bi-weekly column on National Security. 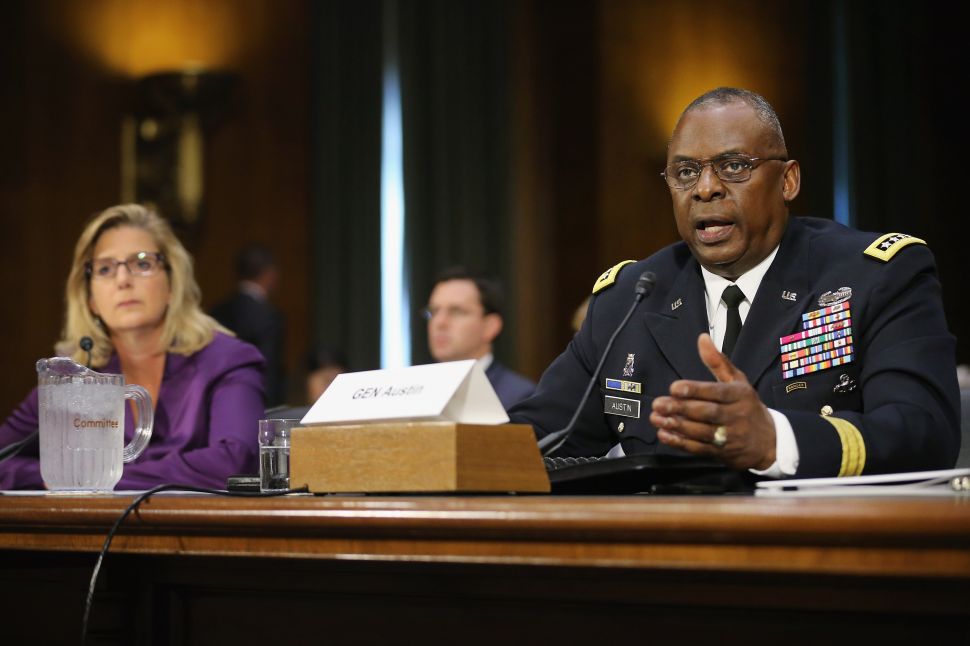