“Now this is why people go to the opera!”

So whispered a curmudgeonly fellow critic into my ear as we exited the Metropolitan Opera Friday night after the season premiere of Il Trovatore. He might have wanted to keep his joy a secret—after all, he hates everything—but everybody else streaming out of the packed auditorium was ready to find a rooftop to start shouting, “Yes, this is what we’ve been waiting for!”

This throwback to the golden age of opera—superhuman singing greeted with frenzied ovations—was a function of a perfect storm of excitement: a performance of Verdi’s 1853 spellbinder to rank with one’s rosiest recollections of past glories, in combination with a poignant human story that left both cast and audience dissolved in tears.

Superstar Dmitri Hvorostovsky, returning to the role of the scheming Conte di Luna he first sang here in 2009, was very nearly a no-show. Last June he suddenly canceled months of upcoming performances, announcing he was seeking treatment for a brain tumor. Then, in September, he interrupted his hospitalization in London to sing three performances during the Met’s opening weeks.

At the singer’s first entrance in the opera, proud and handsome in a Napoleonic uniform, the crowd burst into a volley of applause and bravos so loud and long that the baritone’s in-character scowl gradually melted into a beaming smile. Hand over heart, he stepped forward to take a bow before continuing the opera.

The deafening ovation greeting his big aria, “Il balen del suo sorriso,” toward the end of the first half of the opera, was well deserved, for neither illness nor enforced absence from the theater had dimmed his hauntingly beautiful voice and gallant Verdian style.

But the biggest demonstration came at the very end of the evening, when Mr. Armiliato shoved Mr. Hvorostovsky toward the footlights for an additional bow. The cheers rattled the theater as the singer was suddenly pelted with dozens of long-stemmed white roses flung onto the stage by members of the Met orchestra. By this time, the opera’s leading lady, Anna Netrebko, a longtime friend of Mr. Hvorostovsky, was alternating applauding her colleague with wiping away tears.

Best of all, Mr. Hvorostovsky’s return to the Met seemed to inspire the entire company to give the sort of white-hot performance opera fans dream of. Ms. Netrebko, beginning in slightly gooey voice, found her A game for the grueling final act of the role of Leonora, a Spanish noblewoman who falls in love with a Gypsy troubadour. Her high pianissimo notes in “D’amor sull’ali rosee” glinted like moonlight, and her chest tones in the ensuing “Miserere” were like the cries of a wounded beast. Best of all, the soprano performed every note of the usually abbreviated cabaletta “Tu vedrai,” all flashing scales, crowned with a radiant high C. Finally, as her character died slowly of self-administered poison, Ms. Netrebko faded out her rich voice to a shimmering filigree.

The electricity of the evening seemed to inspire veteran mezzo Dolora Zajick, who’s been performing the role of the tormented Gypsy Azucena here since 1988, to sing with fresh gusto and power. The virtuoso Met orchestra played with clarity and fervor despite Mr. Armiliato’s shaky leadership and the cuts marring Verdi’s score.

In the tour de force part of Anna, Met favorite Sondra Radvanovsky left a more mixed impression. Her huge, dark soprano can taper down to a thread of sound, and her breath control gives her he ability to sustain long phrases almost indefinitely. Despite her formidable gifts, though, she lunged at unwritten high notes and stumbled over tacky ornaments to the music. The great scena in the Tower of London just before the queen’s execution here felt less like high tragedy and more like a circus act, complete with a plunge off the trapeze when her attempt at a top E-flat ended in an embarrassed yelp.

Of Ms. Radvanovsky’s acting, the best that can be said is that it was consistent with her singing. She moped, she paced, she moaned and she grimaced. It was like three hours of Carol Burnett sending up Bette Davis.

In contrast to the savage beauties of director David McVicar’s Trovatore production, this Bolena made the Tudor court look both drab and tame—up until the final moment, when the queen’s march to the scaffold was upstaged by a leather-swathed executioner who seemed to have wandered in from the Black Party.

In contrast, Franco Zeffirelli’s 1987 staging of Turandot continued to evoke a Mardi Gras ball thrown by Donald and Ivana Trump. Oddly, though, this year’s brush-up of the gaudy staging was the best thing about the revival. Mr. Zeffirelli’s faux-Oriental aesthetic, equal portions of corn and camp, played brilliantly with the precision and snap director David Kneuss brought to the piece this time around.

A more thoughtful and critical staging of this gruesome fairy tale might better suit soprano Christine Goerke, who sang the title role at the Met for the first time on Wednesday night. She found more detail and nuance in the character of the man-hating princess than anyone since Eva Marton nearly three decades ago. But the stratospheric music of this role lies in the least stable segment of her prodigious voice, so every one of Puccini’s myriad high notes sounded labored and hard-won. Though Ms. Goerke has a pocketful of contracts at the Met for the next few years, I’m willing to bet that a reprise of Turandot is not one of them.

The first week of the season came full circle Saturday night when Il Trovatore returned, this time in Bushwick among a pocket-sized program of Verdi scenes presented by the fascinating LoftOpera. From tiny platforms dotting the Muse performance space, a quartet of singers sang above, among and behind a capacity audience crowding wooden benches. The audience, a mix of hipsters and more traditional (read: older) opera mavens sat rapt, listening up close to big, if not perfectly polished voices from only a few feet away. Cream of the as-always rich crop of LoftOpera artists was Karolina Pilou, a statuesque mezzo with a massive, sinfully rich voice. I hope my cranky colleague got a chance to hear Ms. Pilou. It would be fun to witness his snark stifled twice in one week. 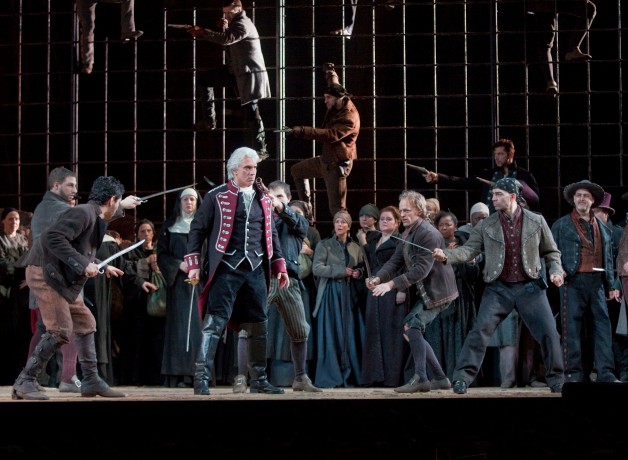