Even a ribbon cutting for New York City’s first new subway station in a quarter century couldn’t keep the Metropolitan Transportation Authority and city officials from warring over transportation funding.

“We need your help,” Mr. Prendergast said, referring to Mr. de Blasio. “New York State has committed $8.3 billion to close the gap of the capital program and without the $3.2 billion we need from the city, we will be unable to meet the capital needs that we need desperately for the program.”

“We need to move, we need to respond to the growth this city has seen,” he added. “We hope we can look to city government to help MTA, the city and the residents be all we can be.”

It was just the latest jab from Mr. Prendergast, who wants the city to contribute $3.2 billion toward the MTA’s $26.8 billion capital plan. After a G train derailment on Friday, the chairman blasted the city for “only” offering $657 million and said he was “tired of writing letters to city officials that result only in vague calls for more conversations.”

Though the city’s annual contribution to the MTA has historically been a paltry $100 million, Mr. de Blasio argued that the fares and tolls millions of city residents pay every day more than account for a fair contribution to the authority. He also lashed out at Congress for failing to adequately fund state and city transportation.

Mr. Gottfried, who has served in the State Legislature for more than four decades, said every transit advocate he’s spoken to believes the state needs to increase its financial support for the MTA.

“That’s been true over the decades, it’s true today and that is a fight we need to win if we’re gonna have more stations like this,” he said.

“We really rely on mass transit in New York City and it really shouldn’t be a political football,” Mr. Johnson piled on. “I believe that over the past 25 years, the city has put in twice the amount of capital dollars than the state … I look forward to seeing the state identify where they’re going to be coming up with the money for our capital plan. I know the mayor and the Council put up additional money.”

Notably missing from the ceremony was Gov. Andrew Cuomo, who appointed Mr. Prendergast and has repeatedly sparred with Mr. de Blasio since the mayor took office in 2014. Mr. Cuomo’s name was never mentioned.

But former Mayor Michael Bloomberg and former Council Speaker Christine Quinn, now a senior adviser to Mr. Cuomo, were thanked. The long-delayed 7 train extension was a top priority for Mr. Bloomberg during his 12 years in office and opened in Ms. Quinn’s old district.

Rather than wait for the MTA to scrounge up cash to pay for the station, Mr. Bloomberg chose to fund the extension through property taxes from the rising Hudson Yards development on the West Side. Mr. Bloomberg wanted a second West Side station at 41st Street and 10th Avenue, but construction delays and funding shortfalls put off his dream indefinitely.

Sen. Charles Schumer said he too still wants a 7 train station at 41st Street. When it came to the city-state tug-of-war over transportation funding, however, he chose to stay out of the fray.

“Mass transit is the lifeblood of New York. Each side has a good argument,” he told reporters. “They should come together and work it out instead of any public bickering.” 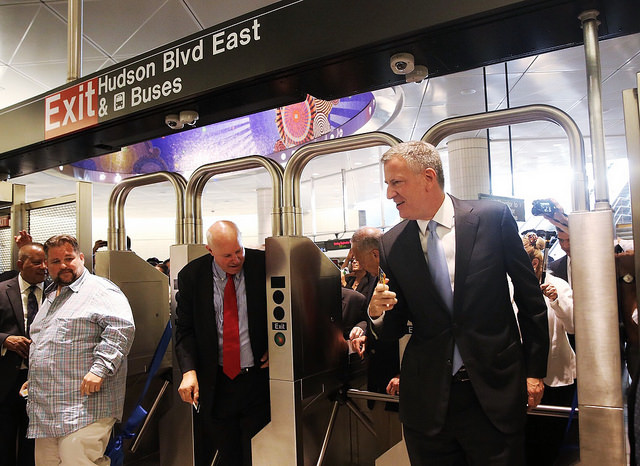