Back when the patrician President Franklin Delano Roosevelt was a “traitor to his class” during the Great Depression, he attacked what he called “economic royalists,” among other financial vultures.

“They are unanimous in their hate for me,” Mr. Roosevelt said just before his 1936 re-election, “and I welcome their hatred.”

Donald Trump, another wealthy New Yorker running for President almost 80 years later, is using some of the same populist approach, which he re-stated strongly on Sunday on Face the Nation on CBS.

While Mr. Roosevelt often used the radio, Mr. Trump literally phones it in, as he did with a call to host John Dickerson and a comment about raising taxes for hedge fund managers and other masters of the universe.

“The hedge fund guys and, you know, the Wall Street guys, but hedge funds in particular, they pay very little tax and that’s going to end when I come out with my plan in about three weeks,” Mr. Trump told Mr. Dickerson.

Regarding executives who appoint corporate board members who reward those executives with high salaries in an era of disparate wealth distribution, Mr. Trump added: “It’s a shame and it’s disgraceful…you see these guys making these enormous amounts of money. It’s a total and complete joke.”

Mr. Dickerson replaced the retiring Bob Schieffer last spring, three years after Face the Nation doubled its exposure from 30 minutes to a full hour. The show, around since 1954, feels fresh again, with Mr. Dickerson’s low-key style and short questions allowing guests to answer and conversations to breathe.

“Are you too nice to be President?” Mr. Dickerson asked Dr. Carson.

Toward the end of the conversation Mr. Dickerson then pressed Mr. Carson twice on whether the boastful and sometimes bellicose Mr. Trump is humble enough to be President.

“As I said,” Dr. Carson said, blinking and closing his eyelids briefly for the second time, “I’m going to leave that up to the voters.”

During a subsequent panel discussion, Mr. Dickerson gave everyone a chance to speak.

One of the guests was Peggy Noonan, The Wall Street Journal contributor and former speechwriter for President Reagan, who was intrigued by the idea of Vice President Joe Biden challenging former Secretary of State Hillary Clinton for the Democratic nomination.

“Oh, my goodness!” Ms. Noonan said, off-camera but on mic. “That’s going to be something to watch.”

The most treacly moment of the week came on “Fox News Sunday” when host Chris Wallace concluded his leadoff interview with John Kasich, the Ohio governor who is also a Republican presidential candidate and is a former Fox host.

“You are a terrific questioner because the answers can only be as good as the people that ask the questions,” Gov. Kasich said to Mr. Wallace. “You are a pro.” Aw, shucks.

Later, the “pro” Mr. Wallace asked a biased and loaded question about the war and chaos in the Middle East to Sen. Chris Murphy of Connecticut, a Democrat on the foreign Relations committee.

Go ahead, “Democrat” guest. Start with the host’s biased premise and try to defend your president from an unproven assumption. Classic Fox style.

On NBC’s Meet the Press, host Chuck Todd waited until near the end of his interview with Gov. Chris Christie of New Jersey to ask about the Bridgegate scandal that has damaged Mr. Christie’s Republican presidential candidacy.

“You’ve got four people who were very close to you that are either indicted, have pled guilty or are under investigation,” Mr. Todd said. “What should we take away from this as Americans when we think about you—that you had bad judgment in the people you picked or you created a climate where people thought they could operate this way?”

“Neither,” said Mr. Christie, who urged people to stop reading newspapers, a comment Mr. Todd echoed in disbelief. After Mr. Todd awkwardly walked across the set to his panel of commentators, newspaper columnist David Brooks of The New York Times made a Freudian slip.

“There’s an illusion in this country in the Republican base that you can govern by screaming,” Mr. Brooks said. “That Donald Blow—Donald Trump, Donald Blowhard—can just scream and somehow govern the country.”

Mr. Harpootlian tried to make the point that Mr. Biden more than a decade ago proposed dividing Iraq into Sunni, Shia and Kurd provinces.

“If we had followed his advice…”

Ms. Raddatz interrupted him, then said, “Go ahead, go ahead, finish that thought.”

Mr. Harpootlian did, but the effect was lost.

It’s an interesting point, worth a follow-up question. But Ms. Raddatz ignored it and went on with her script.

Perhaps Mr. Harpootlian will some day be invited to Mr. Dickerson’s CBS show, where guests are allowed to finish their thoughts and the host listens to their answers. 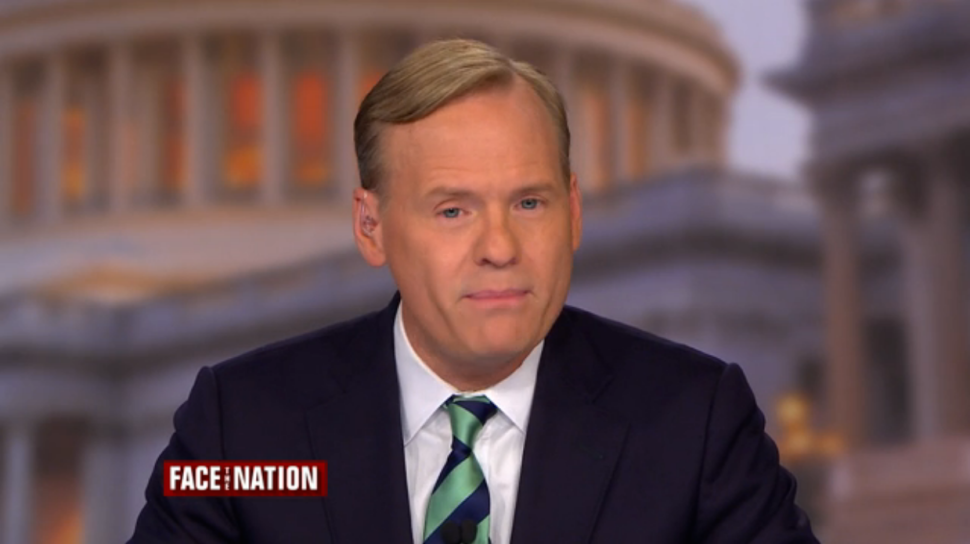