Somewhere between 83 and 300 city workers are homeless, the New York Post reports—underlining the increasingly intractable and intertwined nature of the city’s affordability and homelessness problems. The mayor has pledged to help the shelter-living municipal employees find a way to permanent housing.

Meanwhile, yesterday, amid protests that the city’s plan to rezone a number of low-income neighborhoods to stimulate development does not include enough low-income housing, the City Planning Commission certified three zoning proposals that are a key component of the mayor’s affordable housing plan, Capital New York reports. The proposals now move to a phase of advisory recommendations from local leaders, eventually going before the City Council for approval. The proposals would rezone East New York and allow mandatory inclusionary housing, as well as allow for taller buildings and remove parking requirements.

The landmarked Tribeca office building at 396 Broadway is being converted to a hotel that will charge a comparatively reasonable $200 a night, Crain’s reports. The Amirian Group and Bridgeton Holdings paid $42 million for the property in 2013, after the Chetrit Group abandoned a plan to convert it to rentals.

Speaking of Chetrit,MRP Realty and Long Wharf Real Estate Partners bought a $36.2 million office condo in another building owned by the secretive mogul, Crain’s reports. The 55,000-square foot space is at the base of a condo at 135 W. 52nd Street.

Muslim real estate developer Sharif El-Gamal, the developer of the controversial plan to build an Islamic community center about two blocks from the World Trade Center, is the somewhat unlikely builder of a synagogue for the congregation displaced from 560 Seventh Avenue, according to The New York Times.

Tenants at 512 W. 136th Street, who were temporarily evicted after a fire tore through the building last year (some now live at homeless shelters), claim that the landlord is dragging his feet on repairs so that he can take the building market rate, according to DNAInfo.

The creative solutions to hiding bad health grades never cease to impress—Gothamist reports that village cheap eats mainstay Dojo has a strategically placed a flag over its C rating.

Rose Byrne and Bobby Cannavale have dropped $2.2 million on a Boerum Hill townhouse at 453 Warren (the deal of the decade?), The New York Daily News reports.

Finally, Barry Sternlicht’s Starwood Waypoint and Colony American Homes, two major developers of rental housing outside of New York City, are merging, betting on rents that will continue to rise (even perhaps beyond Americans’ ability to pay them) as high prices keep them out of the buyers’ market, The Wall Street Journal reports. 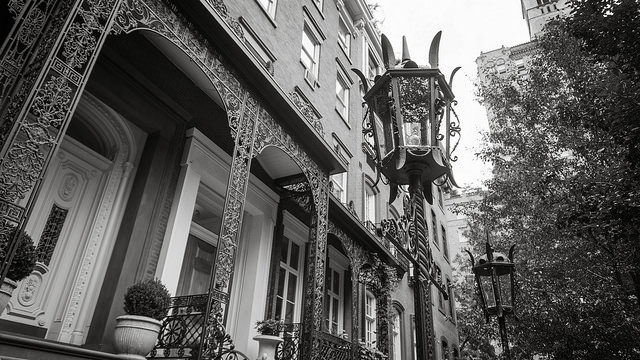