“The potential for a nuclear Iran poses one of the most serious global security issues in our modern history. As my congressional oath of office describes, defending our nation against foreign enemies is my highest responsibility. I have listened to the strong cases made by advocates on both sides, and I have asked the same tough questions to both. After serious thought, consideration, and intensive study of the deal that was presented, I have decided to support the Iran nuclear deal and announce my intention to oppose the resolution of disapproval.

“I evaluated the Joint Comprehensive Plan of Action (JCPOA) through the lens of whether the deal provides the best option available to us in preventing Iran from obtaining a nuclear weapon. A nuclear weapon in the hands of Iran presents a very real and serious threat to not only the security of Israel and the Middle East, but to the entire world. Unfortunately, there are no easy solutions or perfect answers in foreign policy, only choices with varying levels of risk. As a result, I believe that the JCPOA, despite its flaws, presents the United States and our allies the best chance of preventing Iran from developing a nuclear weapon for at least 15 years.

“I remain deeply concerned that the Iranian regime has shown itself to be an untrustworthy and destabilizing force in the region. Iran is currently operating under the strongest sanctions ever imposed on a country by the international community, which were successful in bringing the Iranians to the negotiating table. However, these sanctions did not prevent Iran from getting remarkably close to the development of a nuclear weapon. The fact is that Iran today has the capacity to produce enough fissionable material to complete a nuclear weapon in two to three months. The JCPOA extends this timeframe by requiring Iran to reduce its stockpile of enriched uranium by 97 percent, preventing enrichment above a 3.67 percent, far below the 90 percent necessary for weapons-grade material, and decreasing the number of installed centrifuges by two-thirds. Additionally, Iran is required to render the Arak heavy reactor inoperable, which denies Iran a source of weapons-grade plutonium. Iran also must convert the Fordow facility into a technology center with limits on their research and development. The fact is that if the JCPOA-imposed limits on nuclear material production are vigorously enforced, Iran will not be able to develop a nuclear weapon. Additionally, the agreement allows for sanctions to be reimposed if Iran does not comply with the terms of the deal.

“Because Iran has a history of violating past nuclear agreements, it is essential that the JCPOA is not based on trust but rather on rigorous monitoring and verification. The International Atomic Energy Agency (IAEA) has an almost 60 year track record of promoting the safe, secure, and peaceful use of nuclear technologies. Under the JCPOA, the IAEA will have access to all of Iran’s declared nuclear facilities. Iran’s nuclear program will be subject to rigorous surveillance to monitor its compliance with the terms of the agreement for 25 years. Iran could have up to 24 days to grant IAEA inspectors access to suspected undeclared nuclear sites, and many have expressed concern that this may give Iran the ability to hide evidence of nuclear weapons development. While 24 days may seem too long, it is simply not enough time for Iran to wipe away radioactive materials from leftover dust related to nuclear weapons development.

“Congress must play an important, and I hope, productive role in monitoring the implementation of the JCPOA. Regardless of how my colleagues vote on the resolution of disapproval, if the JCPOA moves forward, Congress must be a willing partner in ensuring the enforcement of the terms of the deal. Efforts to undermine the agreement at that point will only serve to harm our efforts to prevent Iran from obtaining a nuclear weapon and cripple the United States’ ability to counteract Iran’s volatile actions in the Middle East.

“I have no illusions about the destructive force that Iran continues to be in the international community. Iran makes daily threats against the United States and our ally Israel, and its support of terrorism must continue to be a top priority. However, the JCPOA should not be judged on its ability to curb Iran’s hateful rhetoric or its role in destabilizing the Middle East, because that was never the goal of the agreement. The fact is that a nuclear Iran would only exacerbate these problems, and this deal drastically reduces that threat. The international community must continue to address these very serious conventional threats, and these solutions can work in tandem with our strategy to reduce the nuclear threat that Iran poses. Additionally, I have consistently supported assistance for Israel to deter threats and defend itself – my commitment to that will never waver. It is also imperative that we look for ways to bolster that support in light of this agreement.

“Although Iran currently has over $500 billion in existing financial obligations to fund crumbling infrastructure, salaries, and pensions, opponents have argued that lifting sanctions will provide a multi-billion dollar windfall to Iran, which could be used to support terrorism. This point has been especially troubling to me as I have considered the JCPOA, because Iran has been a supporter of Hezbollah in Lebanon, the Houthis in Yemen, and Hamas in Gaza. However, as state sponsor of terrorism, Iran is subject to existing laws that include restrictions on U.S. foreign assistance, a ban on defense exports and sales, controls over exports of dual use items, and several financial restrictions, which are not changed by anything in this agreement. Furthermore, the Iran nuclear deal does not preclude the United States from proceeding with any measure, including military action, to thwart Iran’s support for terrorism against the U.S. and its allies. Finally, there is virtually no scenario in which the current economic sanctions will continue, even if Congress rejects the JCPOA. If Iran fulfills its obligations over the next six to nine months, Iran will almost certainly receive the billions of dollars currently frozen because these funds are mostly held in foreign banks.

“Concerns have also been raised about lifting the bans on conventional and ballistic weapons sales in the long-term as part of a nuclear agreement. While I would prefer to keep these policies in place, the bans were implemented by the international community in response to the acceleration of Iran’s nuclear program, which will be drastically scaled-back under JCPOA.

“I have fully analyzed the viable alternatives. One is military action, that at best would delay the Iranian nuclear program for three to five years and result in the loss of American and Israeli lives. Another is continuing or increasing international sanctions to put further pressure on Iran, which China and Russia have shown they are willing to undermine and promised to veto. Additionally, our most loyal allies in the coalition to prevent Iran from obtaining a nuclear weapon have shown zero appetite for either option.

“As I said at the start, no agreement can be perfect, and the JCPOA is no exception. We must remember that this an agreement between several nations and in any negotiation compromise is required. However, I am not convinced that a “better deal” – which exists only in the abstract – will materialize if Congress were to reject the one before us. This path would require the world’s largest economies — the European Union, China, Japan, India and South Korea, as well as the companies and banks that handle their oil purchases and hold foreign reserves — to follow our lead and re-impose sanctions. These countries receive nearly 40 percent of America’s exports and if we were to cut them off from our economy for the sake of new sanctions, we would put American jobs at risk and “set off extensive financial hemorrhaging” that would devastate our economy, according to our Treasury Secretary Jacob Lew.

“With all the rhetoric invoked surrounding this agreement, I am reminded of what President Ronald Reagan told the Soviet leader Mikhail Gorbachev in November 1985 when they discussed nuclear arms reduction. President Reagan said, “I bet the hard-liners in both our countries are bleeding when we shake hands.” And when the United States struck an agreement with the Soviet Union two years later to reduce the size of our nations’ nuclear arsenals, President Reagan received much criticism, including, as conservative columnist George Will put it, for accelerating “the moral disarmament of the West by elevating wishful thinking to the status of political philosophy.” Now, almost 30 years later we see that President Reagan’s actions, were not a capitulation to an entrenched enemy, but instead the underpinnings of a larger strategy that reduced the nuclear threat.

“While we all might not like how we got here today, we must not lose sight of the most important issue at hand – preventing Iran from obtaining a nuclear weapon. Rejecting this agreement leaves us with a crumbling sanctions regime, a weakened standing for our nation on the global stage, and most critically with Iran only months from completing the development of a nuclear weapon. Moving forward with this agreement is most certainly not the last step, but the first because it commits the international community to ensuring that Iran does not become a nuclear weapons state. Supporting the JCPOA is the best course of action for our nation, our allies, and to prevent the development of an Iranian nuclear bomb.” 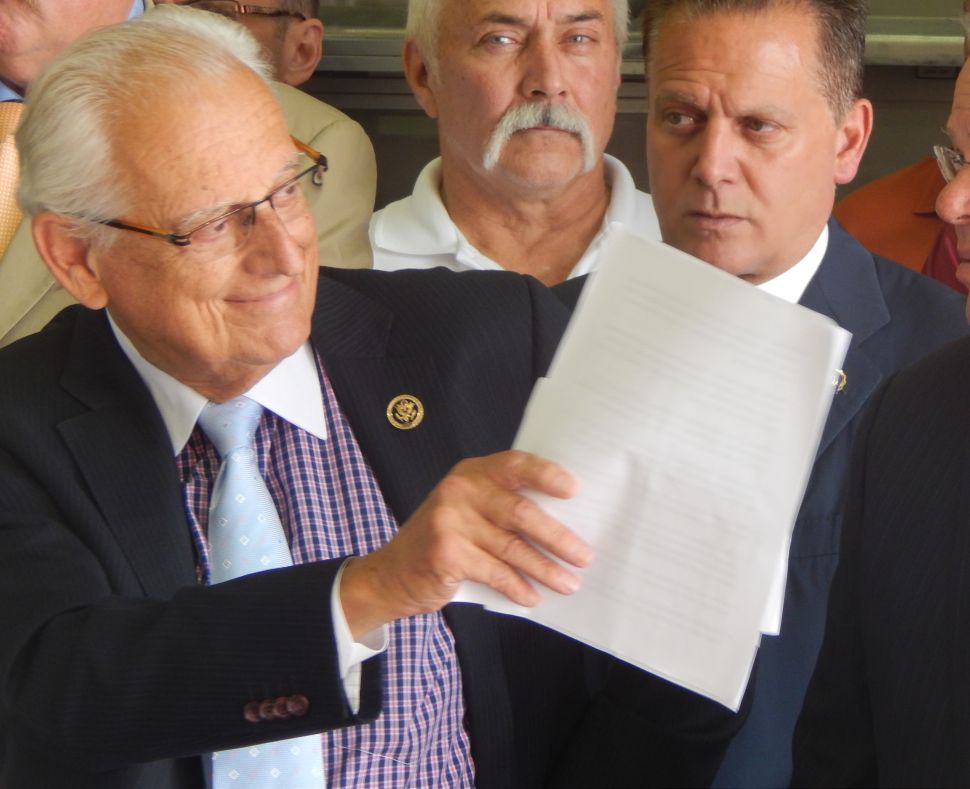